Sarah Wilhite had a career-high 25 kills in Saturday’s match against Louisville. 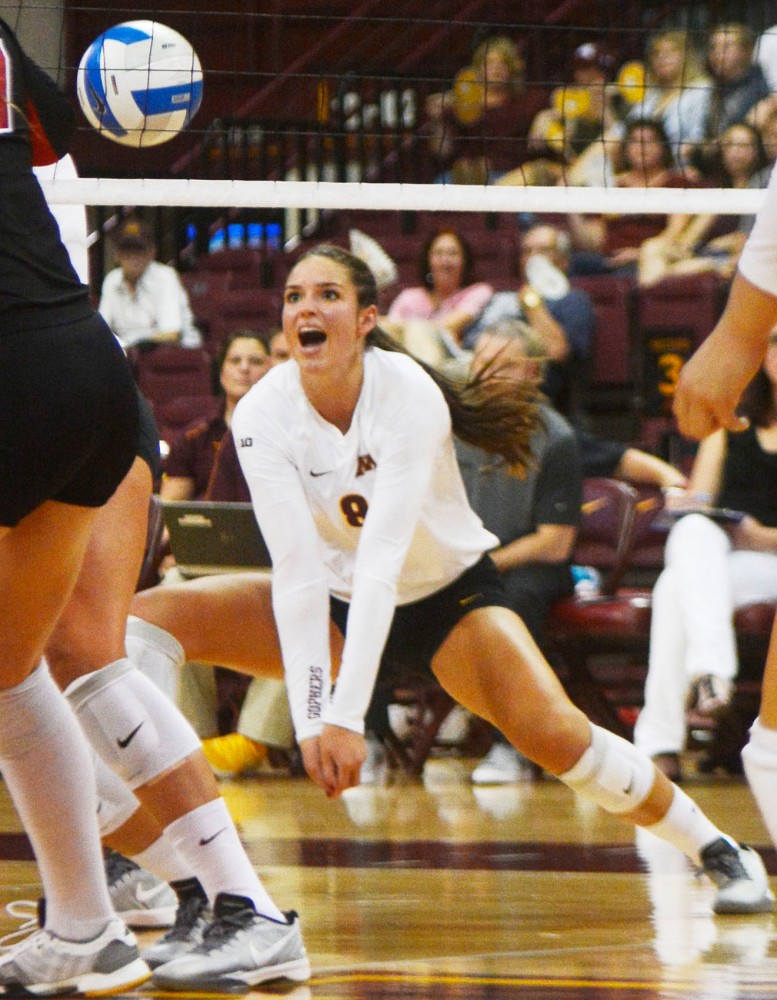 University of Minnesota Outside Hitter Sarah Wilhite lunges for the ball Saturday night at the Sports Pavilion.

To help replace her production, the Gophers have turned to sophomore outside hitter Sarah Wilhite, who has impressed in her new starting role. She led the team with a career-high 25 kills on Saturday night against Louisville.

“I just went out there and kept my head high,” Wilhite said. “I definitely fed off of my teammates’ energy and encouragement.”

“Sarah was the hot hitter that night,” Schau said. “I kept giving it to her because she kept killing it.”

In two matches this season, Wilhite has played in all seven of the team’s sets.

She played in just 65 sets last year, compared to Wittman’s 124.

“Sarah is taking on a full-time load as an outside hitter,” head coach Hugh McCutcheon said.

Though Wilhite will be partially responsible for filling Wittman’s role on the court, the loss of the two-time captain has opened the door for new leadership.

However, Wilhite said she sees this as a chance for anyone on the team to become a leader.

“Everyone has the potential to rise up,” Wilhite said. “We aren’t gonna turn to one person if we’re in a rut. We’re gonna turn to each other and work as a team.”

The Gophers will have a chance to do so this weekend as they head to Connecticut to compete in the Yale Invitational.

This weekend’s tournament will mark the first away games of the season for Minnesota. Though road games can prove difficult in any sport, McCutcheon said it could be easier than playing in the Sports Pavilion.

“The Pav is great,” McCutcheon said, “but there’s a lot of emotion in that gym.”

With the Gophers still playing nonconference matches, McCutcheon said he hopes to get a good look at the entire team’s play this weekend.

“I would expect that we’ll try to get everyone in,” McCutcheon said. “I think we’ll be able to mix and match a bit.”

Last weekend’s loss to Louisville showed Minnesota’s weaknesses, but McCutcheon said the team will take it as a learning experience.

Looking forward to this weekend, McCutcheon and Wilhite both said the team needs to work on its discipline.

“[We] need to hold each other to a little higher standard,” McCutcheon said.

McCutcheon also said he hopes to see the team improve its consistency.

“There were some flashes of brilliance over the weekend and some pretty big chunks of mediocrity,” McCutcheon said. “It’s about smoothing that out and getting into a good space.”