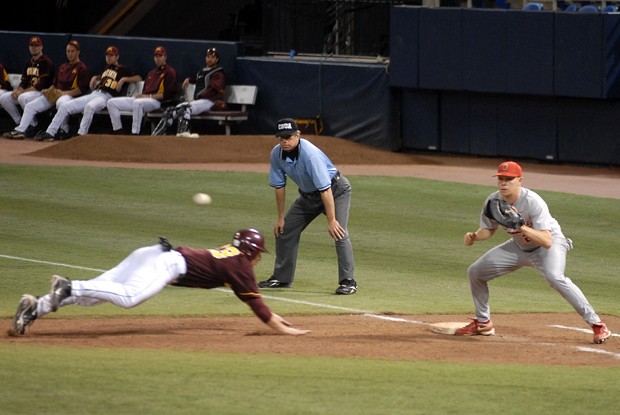 John Anderson isnâÄôt a fan of the gray hair, but heâÄôll certainly take the wins. âÄúYouâÄôve got to win the one- and two-run games if you want to have a successful season,âÄù MinnesotaâÄôs veteran head coach said Tuesday night after his teamâÄôs seventh one-run win of the season, this one 6-5 over North Dakota State. âÄúAnd weâÄôve done that fairly regularly, but the gray hair I continue to get is part of that; I notice it every morning.âÄù In his 28th year, Anderson knows a thing or two about successful seasons. The win brought him to within three of the career 1,000 wins mark as a head coach; a milestone he claims is related strictly to longevity. His players know better. âÄúRegardless of how long you coach you have to be a good coach to win 1,000 games,âÄù junior centerfielder Eric Decker, who was 3-for-4 Tuesday with a run and an RBI, said. Anderson is just a sweep of Michigan away from reaching quadruple digits. But as heâÄôs always done, Anderson is staying unflinchingly focused on the present, and making sure his players do the same. When junior second baseman Derek McCallum popped out in his first two at-bats, Anderson pulled him aside in the dugout. âÄúI just told him, âÄòYou gotta keep your hands in the hitting zone longer and get a little more extension out in front of the plate; youâÄôre just cutting your swing off,’âÄù Anderson said. McCallum soaked up the advice, stepped up to his next at-bat and sent a two-strike pitch over the wall in left-center. His leadoff home run put the Gophers back in front minutes after the Bison had scored three runs in the top of the seventh. It was McCallumâÄôs only hit of the evening, but it couldnâÄôt have come at a better time. âÄúItâÄôs almost routine now,âÄù Decker said of McCallumâÄôs team-leading 14th home run of the season. âÄúHeâÄôs one of those clutch players that when you need a big hit and heâÄôs up to the plate, you know heâÄôs going to deliver. And itâÄôs fun watching him, I get pretty excited.âÄù McCallumâÄôs response to North Dakota StateâÄôs big inning was the most visible, but not the only one that occurred, according to Anderson. âÄúThe thing I was impressed with,âÄù he said, âÄúwe gave up a three-spot there late âÄì we walked a few guys, made an error on defense, things that generally get people off the tracks as a team âÄì and when they came back in the dugout I didnâÄôt sense there was a change in terms of our focus or our place [mentally].âÄù Tim Ryan, Luke Rasmussen and Scott Matyas combined to shut down the Bison in the eighth and ninth and Minnesota takes the momentum of a midweek win and a seven-game conference win streak into this weekendâÄôs Big Ten series at Michigan. âÄúI feel like things are really clicking for us right now and this is the time to have that momentum,âÄù Decker said.