Minnesota rebounded after dropping its first Big Ten match of the season to Wisconsin on Oct. 13. 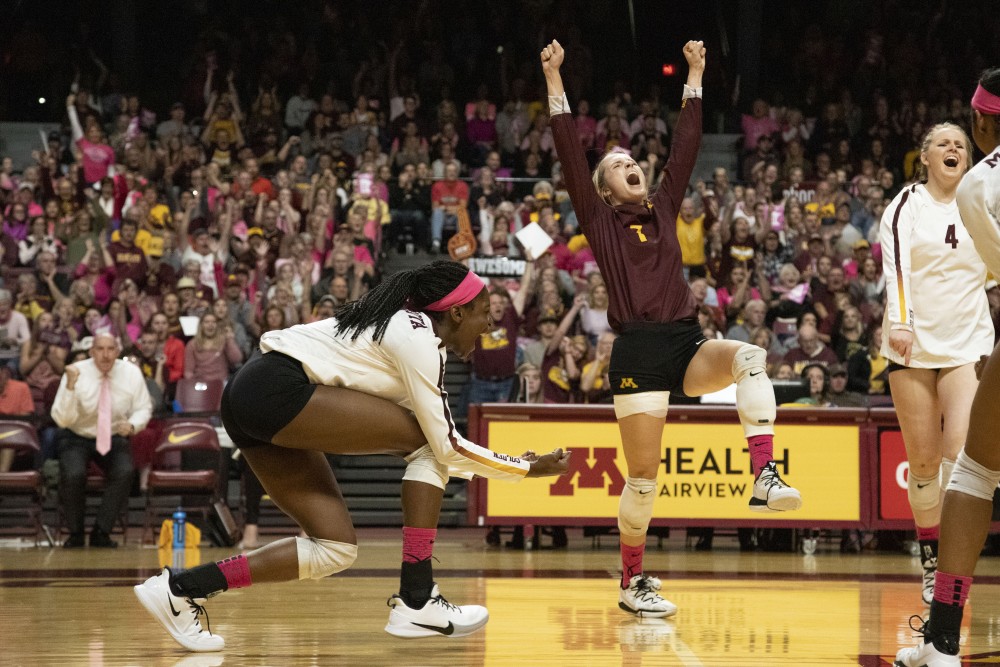 Adanna Rollins and CC McGraw celebrate a scored point at the Maturi Pavilion on Saturday, Oct. 19. The Gophers defeated Illinois three sets to one.

The Gophers volleyball team won their second match in two nights, taking down No. 17 Illinois for the second time this season.

The Gophers won in four sets: 25-16, 25-22, 22-25 and 25-23. Minnesota opened the first set on a 6-0 run. Opposite hitter Stephanie Samedy had three kills in that run, and it was capped with an ace from defensive specialist Rachel Kilkelly. Outside hitter Airi Miyabe had back-to-back kills late that gave the Gophers a 22-13 lead, and she joined forces with middle blocker Regan Pittman on a block to close out the set. The Gophers held Illinois to a .021 hit percentage in the set.

Illinois jumped out to a 10-5 lead early in the second and led the majority of the set. They held on to their five point lead as they went up 17-12, but the Gophers started to make their comeback. Outside hitter Adanna Rollins had a pair of late kills, the first giving the Gophers a 22-21 lead, and the second getting them to set point with a 24-22 lead. An Illinois attack error gave Minnesota the set. Rollins led the way for the Gophers in the second with seven kills in the set.

After dropping a back-and-forth third set, Minnesota came out firing in the fourth. They took a nine-point lead when a block by Pittman and middle blocker Shea Rubright put the Gophers up 18-9. Illinois slowly crept back into the set. They went on a 5-0 run that cut the Gophers’ lead to three, and came as close as one when Minnesota was at set point before Pittman closed out the match. Defensively, C.C. McGraw added 10 digs in the fourth, giving her 32 on the match. The Gophers got their seventh win of the Big Ten season on the team’s Dig Pink night, a night dedicated to breast cancer awareness. The team is contributing by raising money for cancer research.

“Hugh [McCutcheon] said at the beginning of our team talk going into the match, ‘We’re fighting for something and it’s something bigger than volleyball,'” McGraw said. “It was really important for us just to come out and play as hard as we can.”

McGraw did exactly that and earned the praise of her head coach.

“It’s important. C.C. [McGraw]’s here having a 32-dig night, that’s phenomenal. And she’s gone through some adversity already this season,” McCutcheon said. “We’re just really proud of her effort and her commitment to making the play, she carried a big load for us back there.

The team bounced back from their first loss of the Big Ten season Friday, taking down Northwestern in three sets.

Friday’s match also marked the return of setter Kylie Miller. Miller had been out of the lineup since the Gophers’ Sept. 28 sweep of Purdue. In her return, Miller had 14 assists and three digs.

“It was fun having her back and on the court,” Rollins said. “I know she’s excited to get back on the court and gel with us.”

The Gophers started rolling right away in the first. Middle blocker Taylor Morgan opened the set with a kill. Later in the set, she combined with Miyabe for a block that gave the Gophers a 9-4 lead. Northwestern answered with a 4-0 run late, a run that cut the Minnesota lead to four, but they couldn’t cut it down entirely. The Gophers took the set after holding Northwestern to a .059 hit percentage in the first. The Gophers strong defensive performance in the first carried into the second. They held Northwestern to a .024 hit percentage in the set, largely due to the team’s play at the net. The Gophers had five blocks in the set.

“We’ve been working on blocking a lot,” Rollins said. “Just making sure we stay discipline and out of the net and making sure we play around the block. That’s been helpful for us.”

Rollins had a couple kills early in the third, and an ace that gave the Gophers a 6-3 lead. McGraw brought the Gophers within two from the match after an ace and Samedy brought it to match point with a kill. Northwestern went on another late 4-0 run, cutting the lead to two, before Samedy closed out the set and match with another kill.

The Gophers will be back in action Oct. 25 when they take on Michigan.