A City Council vote could reverse a heritage commission’s denial of a proposed condo project. 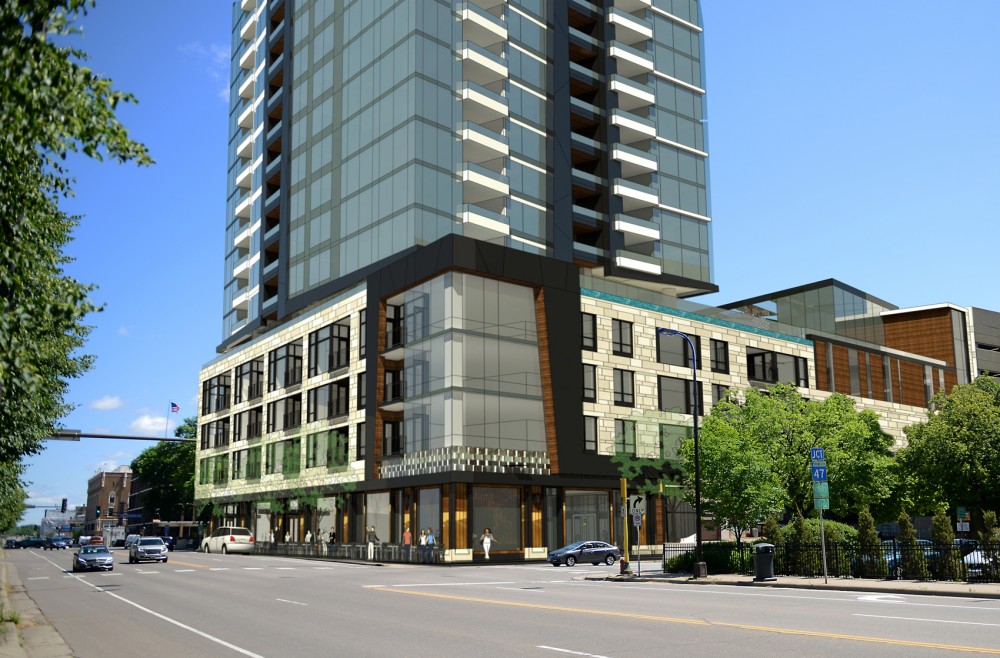 A proposed 40-story luxury housing tower in the St. Anthony Falls Historic District was recently denied by the Historic Preservation Commission due to its height. The tower, proposed by Alatus LLC, would be located on Central Avenue Southeast, as represented here with through a superimposed rendering.

Plans for a new condominium tower have divided residents and business owners of the St. Anthony Falls Historic District.

Although the proposed 40-story luxury condominium project was denied by the Heritage Preservation Commission  last month mainly due to height concerns, a Minneapolis City Council committee will vote whether to override the commission’s decision — which was appealed by the project’s developer Alatus LLC — this week.

While those who oppose the proposal say the building was inappropriate for the district, which has guidelines that limit height and other attributes of potential developments, some say the project would be good for business in the area.

“‘This building is very attractive but not appropriate in this district,’ is essentially how it was put by several of the commissioners,” said Janelle Widmeier, senior city planner for the city’s Department of Community Planning and Economic Development.

She said the developer wants City Council to consider alternatives to the set guidelines.

The luxury tower would be constructed at 200 Central Ave. SE and would be 11 stories taller than the area’s next-highest building.

Chris Osmundson, senior development associate for Alatus and lead developer on the project, said he is hopeful that they’ll be able to win the appeal at this week’s zoning and planning committee meeting.

Osmundson said they’ve received a letter of support from the Marcy-Holmes Neighborhood Association, along with support from some surrounding businesses.

“I think it’s fair to say that the neighborhood the project is in supports the project,” he said.

But Osmundson said he understands why the preservation commission denied the plan, given the historic neighborhood’s height rules for new buildings.

“So, by denying the building, they stuck to the guidelines that they have in place, which is a totally fair and reasonable decision by them,” he said.

If the appeal is successful, Osmundson said the proposal would be discussed further by the city before getting approval to break ground.

But he said the resident group Neighbors for East Bank Livability started a petition against the project despite Alatus attempts to work with them.

“We’re going through the process with them; we’ve had discussion with them about what they would like to see the building look like, but they’ve remained steadfast in their commitment to continue to petition this project,” Osmundson said.

He said the petition, centered on environmental concerns, was denied by the city’s zoning and planning committee.

“I would say … the neighborhood as a whole is divided,” Frey said. “I’ve had numerous calls expressing love for the design, the height, but not the location.”

While he wouldn’t give his opinion on the proposal, Frey said a building like this would bring in many new residents and provide economic growth for surrounding small businesses.

Frey said other cities have proven that historic buildings can coexist with new ones.

“Concepts of growth and preservation are not mutually exclusive,” he said. “In numerous different cities throughout the world, we’ve seen beautiful modern structures erected in and among … historic buildings.

The appeal will be voted on at the zoning and planning committee meeting June 9.