Voting where it matters: amid close races, University students prepare for midterms

With the midterm elections on the line, students at the University of Minnesota could play a significant role — if they vote. 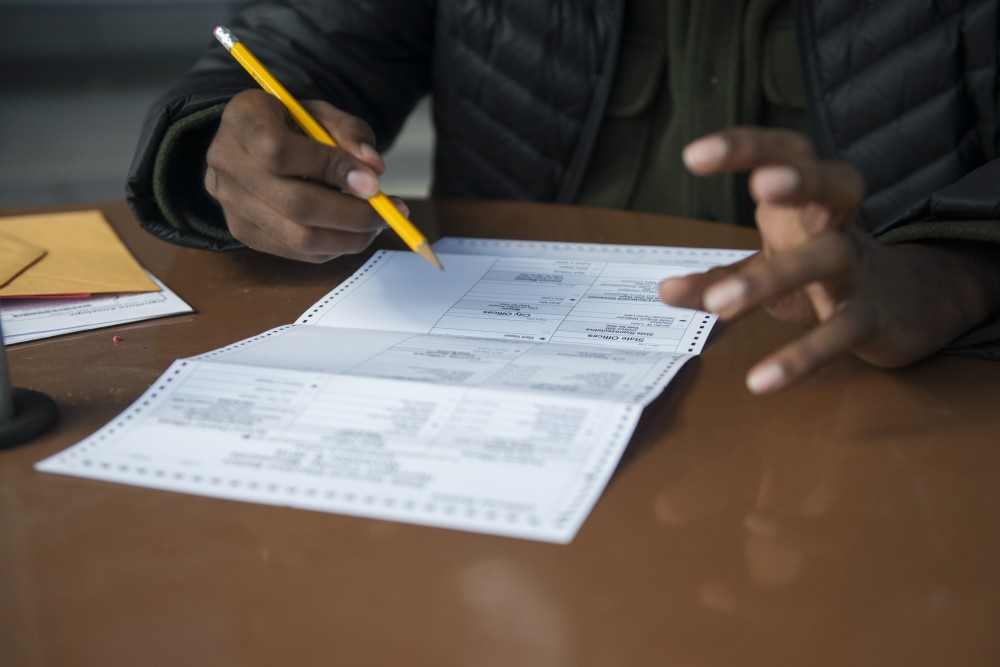 Secretary of College Democrats at the University Abdinasir Nourkadi, 19, fills out his absentee ballot on Tuesday, Oct. 23 at Coffman Memorial Union. Nourkadi said he is voting for Ron Case for Mayor of Eden Prairie. Case was Nourkadi's math teacher.

That decision could make a big impact — they’re voting in Minnesota’s 2nd Congressional District, outside the campus area, which is one of the many competitive districts that have put Minnesota at the center of the 2018 midterms and motivated students to turn out on election day.

Thousands of University students will likely vote in the midterms — many in key districts that could determine the makeup of Congress next year. Despite historically low turnout, there have been efforts to increase voter turnout on campus and utilize the state’s absentee voting system so that students have the opportunity to impact races across the state with their votes. Allard, vice president of University student group College Democrats, wanted to vote in his home district because of how close the race is.

“I know more about my home district. I feel more connected there. And the stakes are higher,” said Allard, a third-year student.

The 2nd District, which encompasses much of the metro’s southeast suburbs, is home to a tight race between Republican Rep. Jason Lewis and Democrat challenger Angie Craig.

Allard’s a big supporter of Craig — he’s been a Democrat for as long as he can remember. Growing up in Shakopee, he found himself drawn to the party’s progressive stances.

Geiger, a second-year student and member of Students for a Conservative Voice, plans to vote for Lewis in his hometown of New Prague. Geiger said he would probably vote in his home district regardless of its proximity.

“There’s just somewhat of a sort of arbitrary civic pride in voting where I grew up,” he said.

Lardy, a fourth-year student from Eagan, said she doesn’t fully align with one political party or the other and would even consider voting independent.

Lardy isn’t sure who she’s supporting yet. But for her, voting back home has little to do with the race: “My parents still live there so it gives me an excuse to go home and say hi,” she said. Students like Lardy could play a deciding role in the race. There are about 6,800 University students system-wide from the 2nd District. In 2016, Lewis beat Craig by only 6,655 votes.

Around half of the Minnesota’s eight congressional districts feature highly competitive races, according to election ratings from the nonpartisan Cook Political Report — some even closer than the 2nd District.

Students say the stakes are higher than ever and with many races are too close to call, young voters could end up being a deciding factor.

“The youth vote will make that difference,” said Larry Jacobs, the director of the University’s Center for the Study of Politics and Governance. “If youth turn out, they could very well swing these districts.”

However, turnout among young voters is historically lower than other groups, and drops even lower in midterms, political experts say. In the past two midterms in Minnesota, turnout among 18-24-year-old voters was significantly lower — over 30 percentage points — than the general population, even in a state with one of the highest turnout rates in the country.

“What will differ is who turns out to vote,” Nickerson said.

Since 2012, University of Minnesota students have turned out in presidential and midterm elections at higher rates than students at other colleges and universities across the country, according to the National Study of Learning, Voting, and Engagement, which surveyed more than 1,000 schools.

Yet, turnout at the University remains consistently lower than the turnout of Minnesota’s general population.

Working to get students involved

Michaela Muza, a campus organizer with the Democratic Farmer Labor Party, said it can be difficult to reach students, both physically and ideologically.

Many students at the University live in apartment and dorms, which have stringent rules for campaigning, Muza said. She’s also found some young people are turned-off by partisan politics and the divisive national climate.

But Muza said turning out young voters is possible, it just takes a little more effort.

“We get asked all the time, ‘Young people don’t turn out. How do we get young people to turn out?’ And the answer is engaging with us,” Muza said. “You have to come to campus, and come to our events … ask us what we care about and what’s important to us.” “We developed programs to really tailor to young folks and millennials and give them a pathway to get involved in a meaningful way,” Poindexter said, explaining that many organizers and interns in the GOP are University students.

Laridaen said she has seen increased energy and awareness about the midterm elections among students she’s talked to.

“This year, more than usual, students are definitely aware of the races taking place here in Minneapolis and the races that are taking place back home,” Laridaen said. “Students are … starting to realize that sitting out isn’t really an option anymore.” MSA has used TurboVote, an online system that the organization believes helps simplify the process.

The University also received a $5,000 grant from the Big Ten Voting Challenge to turn out students who are registered, Miller said.

He believes the efforts will make a difference.

Miller expects student turnout at the University to reach around 60 percent, which would double turnout from the last midterm in 2014. Miller said turnout could even match figures from the 2016 presidential election, which would be an impressive feat for a midterm year.

“I’m seeing in all sectors of the populace, there’s desire to be politically involved,” Miller said, caused in large part by the President Donald Trump and his controversial approach to politics. “I’m seeing people who’ve never had an interest in politics starting now [to care].”

Living away,  voting at home

Many student voters planning to cast a ballot in their home district are using the state’s no-excuse absentee voting system, which they say has made the process easier.

Although MSA didn’t push students to vote absentee, Laridaen said students are deciding to vote in close races because most races in Minneapolis are less competitive.

“Students are probably being a little bit more active and being a little more conscious about that decision,” Laridaen said. “Often times, people choose where they want to vote based on convenience, but I think this year students are taking harder look at it.”

Second-year student Abdinasir Nourkadi will vote in the 3rd District, which political experts say is one of Democrats’ best chances to flip a seat. Republican Erik Paulsen, who was elected in 2008, is facing first-time democratic candidate Dean Phillips.

Voting in his home district is special, Nourkadi said, because he knows the community and the area’s elected officials.

“Eden Prairie isn’t only close, it’s personal,” Nourkadi said. “I would vote regardless, but because of the contentious nature of the district, there’s a big pressure for me to make something happen.”

Like many students voting in districts outside Minneapolis, he’s utilizing the state’s absentee system.

An increasing number of young voters are choosing to vote absentee. Around 18 percent of 18-24 year-olds voted absentee in 2016, up from 10 percent in 2014 — figures that nearly match absentee rates for all Minnesotans. Absentee voting has continued to pick up before the election this year. As of Oct. 25, more than 370,000 absentee ballots have been requested from state officials, an increase of 203 percent over the same time in 2014 and slightly above rates for the 2016 presidential election.

Agatha Pokrzywinski, a first-year student from Duluth, absentee voted in the 8th District, home to a highly-competitive race between Republican candidate Pete Stauber and Democratic candidate Joe Radinovich. Republicans see the traditionally blue district as one of their best chances for a pick-up.

Many students say they’re choosing to vote in their hometown instead of Minneapolis because areas around the city tend to heavily support Democratic candidates.

Elizabeth Steenberg, a second-year student from Eagan, mailed in an absentee ballot for Craig in the 2nd District.

“I knew it was going to be a really tight race,” Steenberg said. “I thought my vote would be a lot more valuable in that district.”

Many students voters recognize they have a unique opportunity at hand. Yet despite the optimism and energy on campus, the final test will come Nov. 6 — and advocates and experts warn not showing up has implications far beyond the ballot box.

“It’s hard for any politician to count on the youth vote because it’s been such an unreliable presence in the past,” Jacobs said. Jacobs said students have a straightforward choice: “If you show up, you’re listened to. If you sit out, you’re ignored.”

For Miller, voting is the most important thing students can do to advocate for themselves. He pointed out that when University students meet one-on-one with lawmakers, “One of the first questions they ask is, ‘Did you vote?’”

Allard is one of the many students who can say he did.

He said the midterms provide more than enough cause for students to vote.

“Everybody has values. Everyone has issues they care about. Everyone has a way they want society to look,” Allard said. “When students vote, people have to pay attention to us.”