Gophers one win away from the College World Series

Minnesota defeated LSU 1-0 in game one of the Minneapolis Super Regional on Friday. 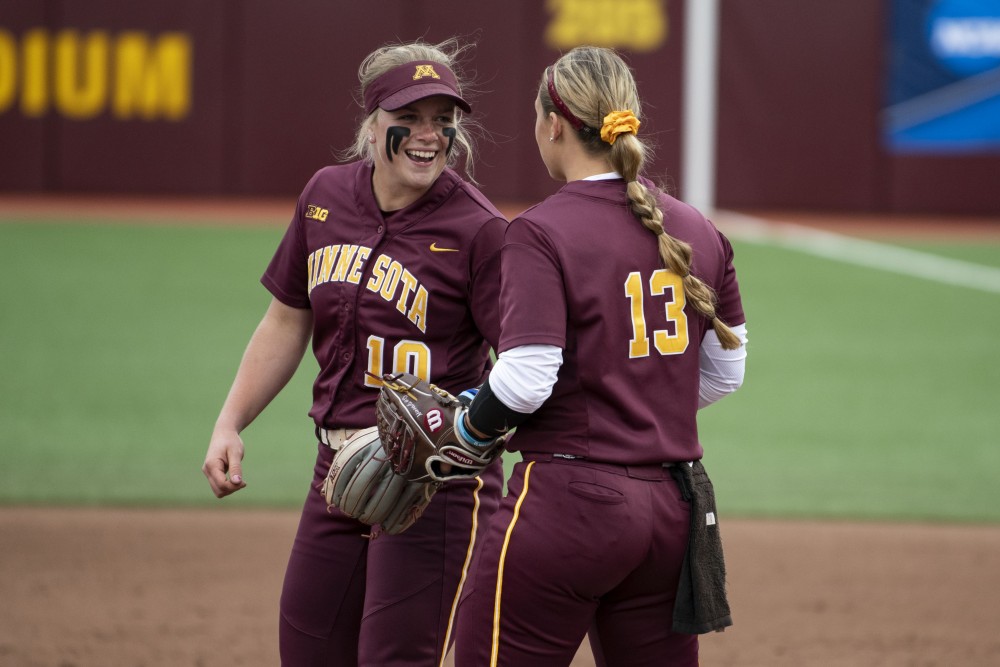 Juniors Katelyn Kemmetmueller and Amber Fiser celebrate after an out on Saturday, May 18 at the Jane Sage Cowles Stadium in Minneapolis. The Gophers beat the University of Georgia 2-1.

The Gophers are one win away from their ultimate goal, the NCAA College World Series. It has never been done in program history.

No. 7 Minnesota (45-12) defeated LSU (43-17) 5-3 on Friday in the first of the best-of-three series at Jane Sage Cowles Stadium. The Gophers scored four runs in the fourth inning, taking a 5-3 lead after trailing 3-1 entering the inning.

Right fielder Maddie Houlihan said Minnesota found a way to win even though she thought it wasn’t Minnesota’s best game.

“We were still able to come out with the win,” Houlihan said. “This offense is tough. We’re aggressive. We did a good job today. I think we can get better.”

The Gophers responded in the bottom half of the third when Houlihan blasted her seventh home run of the season to left center field.

“It’s a testament to this team that a different person is going to step up every game,” Houlihan said. “That’s what a complete team is. You don’t have to rely on one or two people to get the job done. Today was my day to step up for the team.”

The Gophers responded yet again in the bottom of the inning. After Houlihan doubled to cut the Tigers’ lead to 3-2, singles by designated player Natalie DenHartog and shortstop Allie Arneson gave Minnesota the 5-3 lead, which it would not relinquish.

“We talk about winning 60 feet, pressuring the defense and forcing them to make plays,” Trachsel said. “That’s a credit to our resiliency. We were determined to get the job done.”

Fiser won her 30th game of the season, the third most in a single season in program history. She pitched all seven innings and allowed three runs and eight hits while striking out seven. Fiser threw a career-high 147 pitches.

Fiser said it means a lot to her that Minnesota’s offense gave her offensive support.

“It’s incredible when we score how much energy this team brings,” Fiser said. “It’s contagious when we start hitting balls. We know that whoever is going to hit the ball, the next person is going to do the same thing.”

The teams play game two on Saturday at 5 p.m. If Minnesota wins, it will advance to the Women’s College World Series in Oklahoma City, Oklahoma May 30-June 5. If LSU wins tomorrow, there will be a decisive third game on Sunday at 3 p.m.

“Our crowd is electric,” she said. “We threw one strike and it felt like we were about to win the game. It was awesome. I give them so much credit for making it such a fun atmosphere to play in. Home-field advantage has been unbelievable. It may not be the biggest stadium and the most flashy, but you feel at home here. It’s comforting and a cool place to play.”