The Minnesota Daily • May 3, 2009 • https://mndaily.com/215911/sports/rowing/minn-ends-season-sixth-place-finish-big-ten-championships/ 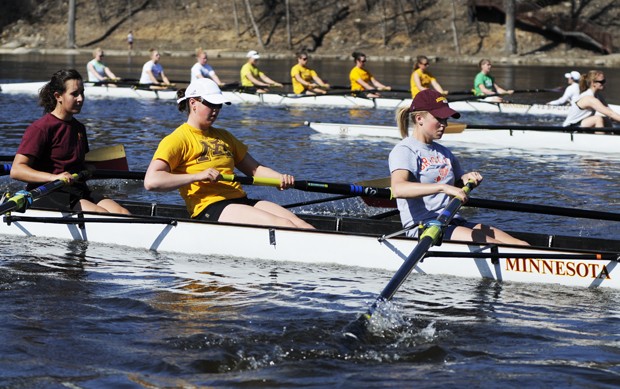 The Minnesota rowing team finished sixth at the Big Ten championships in Columbus, Ohio on Saturday after advancing just one boat to the Grand Finals. The Gophers First Varsity Four boat placed third in its Grand Final âÄî just four seconds behind first-place Ohio State, as the team racked up 15 of its 59 total points. Michigan State earned its second Big Ten Championship in a row after totaling 137 points and tallying wins in both the First Varsity Eights and Second Varsity Eights. âÄúWe had not been in a whole lot of close races this season, and after losing the varsity eight heat this morning, I think that our focus got much better,âÄù Spartans coach Mark Weise said. âÄúIt was sort of a wake-up call, and they realized that they cannot race that way, so they came out in the final, and both varsity eight boats I thought had their best races when we needed it.âÄù MinnesotaâÄôs most successful races came late in the day after its boats failed to qualify for Grand Final races. The Gophers won the First Novice Eights with a time of 6:36.95 âÄî less than two seconds ahead of Iowa âÄî in the Petite Final. With a time of 7:06.99, the Second Varsity Four boat also claimed a first-place finish in a head-to-head Petite Final matchup with the Hawkeyes. But the finishes werenâÄôt enough to compete with Michigan State, Michigan, Wisconsin and Ohio State, all of which advanced multiple teams to Grand Final races. âÄúObviously, we wanted to finish higher than sixth, but the Big Ten Conference is one of the strongest in the nation this year,âÄù Minnesota coach Wendy Davis said in a statement. âÄúWith six Big Ten teams ranked nationally, we knew that we would face tough competition today.âÄù MinnesotaâÄôs 20th-ranked First Varsity Eight boat failed to make the Grand Final after placing third in its morning heat behind No. 4 Michigan and No. 3 Michigan State. The Spartans, who advanced boats to the Grand Final in all but one race, picked up the 1V8 Grand Final win with a time of 6:06.30. Meanwhile, the Gophers 1V8 boat crossed the finish line in 6:19.73 to finish second behind Iowa in the Petite Final. Two members of MinnesotaâÄôs 1V8 boat were honored with individual conference awards. Senior Lisa Pugh earned first-team All-Big Ten honors while senior Ashlee Vilmo was named to the conferenceâÄôs second team. Minnesota will now prepare for the Aramark South/Central Sprints on May 16 to 17 in Tennessee, where the Gophers will compete for lanes at the NCAA Championships at the end of the month. âÄúBig Tens was a great stepping stone to where we need to be in two weeks to get ready for the South/Central Sprints,âÄù Davis said. âÄúWeâÄôll use this next week and get ready for regional competition, and we hope to come out a much stronger team in two weeks.âÄù