The agency’s new assessment confirms the harmful effects of the pesticide imidacloprid. 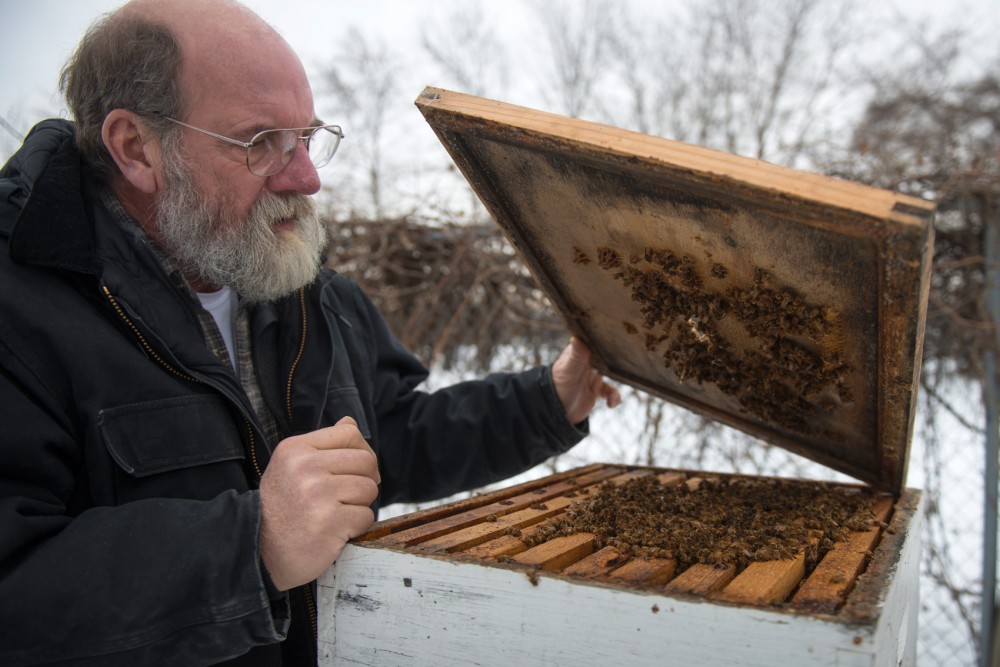 Gary Reuter of the University of Minnesota's Bee Lab looks inside of a box where bees are kept on the St. Paul Campus on Tuesday. Recent research shows that common pesticides found on plants and trees that bees feed off of are entering their nectar and harming bee populations.

Eliana Schreiber
A pesticide found to affect bee behavior that is widely banned across Europe continues to be used throughout Minnesota.
Imidacloprid, a pesticide used on crops like soybeans and cotton, negatively affects both individual bees and their colonies, an Environmental Protection Agency report confirmed in January.
Even in low concentrations, the report said, imidacloprid can negatively impact both pollinators and the amount of honey they produce.
Though the study focused primarily on honeybees, they are much less sensitive to the effects of imidacloprid than bumblebees are, said entomology professor Vera Krischik.
In her research over the past 18 years, Krischik found that low concentrations of imidacloprid affect bumblebee behavior, and in turn, hive functions.
Honeybee colonies, on the other hand, are less impacted by pesticide-induced changes in individual behavior, she said. Worker honeybees transition to foraging roles at the end of their life cycles, essentially retiring from the hive’s core survival functions.
In its January assessment, the EPA stated that imidacloprid affects bees at 25 parts per billion, but Krischik said other scientists have already proven imidacloprid to be harmful in concentrations of 20 ppb.
“People … expected some — not banning of those pesticides — but maybe better best management practices so that some of the usages that were exposed to native bees would be reduced,” she said. “That didn’t happen.”
The question scientists pose now is how the pesticide affects bees and to what extent, Krischik said.
Krischik said people who study native bees were disappointed by what they felt was a misrepresentation of the information the EPA released in the report.
“The issue is not resolved,” she said. “The EPA’s recent report has just confirmed what people thought, but it isn’t resolving the issue.”
The assessment only focused on the pesticide’s role in agriculture, Krischik said, which uses considerably lower levels of imidacloprid than
is involved in greenhouses or structural elements of some buildings.
The pesticide can benefit crops like soybeans, corn, canola and sugar beets, entomology postdoctoral student Edwin Benkert said.
He said farmers sometimes use other pesticides, which could explain why the EPA didn’t find high levels of imidacloprid in crops such as corn.
Pest treatments are considered systemic, he said, and are coded on the seed as the plant grows. Though pesticides create residue, their effect isn’t usually harmful to the food humans consume, Benkert said.
“Most of these products go through rigorous testing before they’re available for commercial use,” he said.
In the future, Krischik said people should look out for the levels of imidacloprid in their water.
Recently, the Minnesota Department of Agriculture reviewed data from the EPA and other sources to examine the impact and risk of pesticides like imidacloprid in water, said MDA research scientist Rajinder Mann.
Mann said because levels of imidacloprid are fairly high in Minnesota water streams, the health department is aiming to keep them from exceeding 90 ppb — a small, yet significant amount, he said.
Humans are less threatened by imidacloprid than insect pollinators are, Mann said, but the data still presents many uncertainties.
January’s EPA report was only the first in a series of four assessments to be published by the EPA before the end of the
year.
Delete Image
Align Left
Align Center
Align Right
Align Left
Align Center
Delete Heading