Indigenous Peoples Day will be celebrated on the second Monday in October. 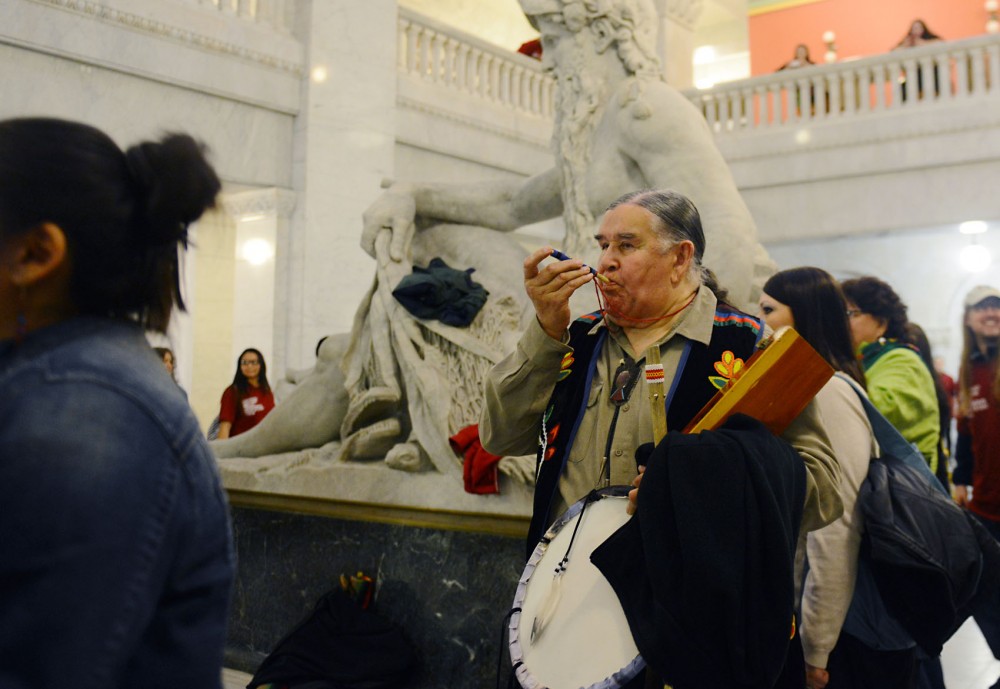 Clyde Bellecourt, a cofounder of the American Indian Movement, blows a whistle during a circle dance in City Hall's atrium on Friday.

More than 500 years after Christopher Columbus sailed the ocean blue, the city of Minneapolis has decided to remember him a little differently.

The City Council unanimously approved a resolution Friday that made Minneapolis the first city in Minnesota to recognize Indigenous Peoples Day on the second Monday in October.

It’s a move years in the making, and it’s a significant nod to a community with deep roots across the state.

“I think it’s long overdue,” said Ward 12 City Councilman Andrew Johnson. “They were here before us.”

“This is the most packed it’s been … with this whole new class [of council members],” Johnson said. “There’s definitely nothing … like this so far.”

Ward 9 City Councilwoman Alondra Cano, the resolution’s main author, said she represents an area with the highest Native American population in the city.

Although the city hasn’t technically replaced Columbus Day with the resolution, Minneapolis does have control over its own communications practices, Cano said. From now on, all official city communications will recognize the second Monday in October as Indigenous Peoples Day.

“We will no longer use Columbus Day as the name for that day,” she said.

Despite strong support for the resolution, not everyone agrees with the change.

Cam Winton, an energy industry attorney and 2013 Minneapolis mayoral candidate, called the change an improper use of government power.

By emphasizing Indigenous Peoples Day, he said, the Minneapolis City Council is going around a city ordinance that recognizes Columbus Day as a federal holiday.

Members of the local Native American community say the change is an acknowledgement of a fraught past.

Bill Means, a local Native American activist, called Columbus “the mascot of American colonialism” as he addressed the crowd at City Hall on Friday.

Means said the resolution was a major victory for members of the Native American community, some of whom have struggled for years to gain greater recognition.

“It’s kind of refreshing to come and be invited to this chamber, because usually we have a drum outside and three or four hundred people marching,” he told the tightly packed audience Friday. “This marks a great change in our relationship.”

By approving the resolution, the City Council acknowledged that Minneapolis was built on Dakota homelands and that Native American history and culture have shaped the city, said Clint Carroll, an assistant professor in the University of Minnesota’s American Indian Studies department.

“It sends a message of reversing past recognition of a very detrimental figure in the history of this continent’s indigenous peoples,” he said.

Past and present activism

The Twin Cities area has long been a center for activism on behalf of indigenous people.

This year, students placed white flags in the ground outside Coffman Union, symbolizing the way European settlers claimed land as their own.

He said the resolution is “a good first step,” but it’s not the end of the road.

Some efforts to recognize indigenous people on Columbus Day have cropped up elsewhere.

The city of Berkeley, Calif., has recognized Indigenous Peoples Day since 1992. And Monday night, the City Council of Red Wing, Minn., voted on a similar resolution.

The success of the change in Minneapolis has also sparked the interest of state and federal legislators, Carroll said.

“Not only are we going to pass this and move on to the state of Minnesota,” Means said to attendees Friday, “but we’ve been talking to Congressman Keith Ellison to take it to Washington, D.C.”