Former Gopher quarterback Mitch Leidner was recently involved in The Spring League after stops with the Vikings, Ravens and Broncos. 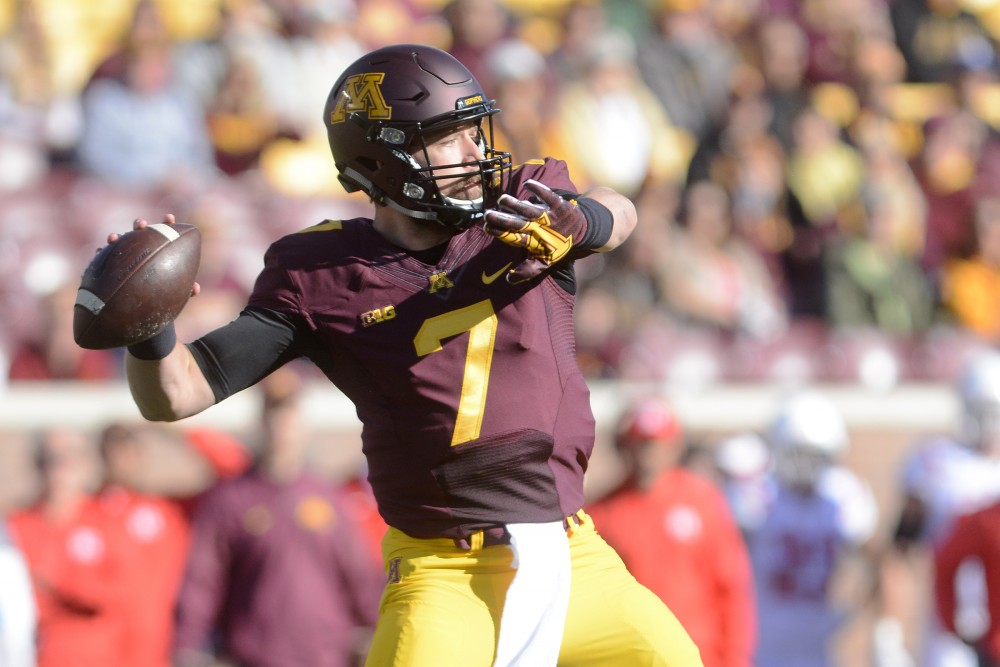 Gophers quarterback Mitch Leidner winds up a throw on Saturday, Oct. 22, 2016 during a game against Rutgers at TCF Bank Stadium.

A dream started with an opportunity to play quarterback for his hometown university, which eventually led to taking snaps at U.S. Bank Stadium.

Former Gophers quarterback Mitch Leidner has done it all.

He recently participated in The Spring League, a league designed to develop skills and give players the opportunity to play in front of professional teams.

“I enjoyed it… There were a lot of really talented quarterbacks and it was fun to compete with those guys and learn from them,” Leidner said.

Despite the great opportunity he had with The Spring League, Leidner said nothing beats the time he spent with the Minnesota Vikings. “It was probably the best couple of weeks of my life,” he said.

The Lakeville native was not drafted in the annual NFL Draft. The 2017 draft was held in late April, leaving Leidner a free agent.

He was then invited to the Baltimore Ravens’ rookie mini-camp, but he left camp without a contract.

In late August, Leidner had another chance in the NFL when the Vikings signed him as their third-string quarterback in the preseason. He did not see time in the Vikings’ third preseason game, but Leidner said his favorite moment with the team was learning he would go in during the fourth preseason game against the Miami Dolphins.

“I remember being in the locker room and them giving me the nod. I remember the guys from Adam Theilen, to Stefon Diggs, Xavier Rhodes, Sam Bradford, and Case [Keenum]; all of those guys were rallying around me and pumping me up,” Leidner said. “It was a pretty unbelievable moment that whole time from half-time to the second half. I had a lot of fun with it.”

Former Gophers wideout and current wide receiver in the Canadian Football League for the Winnipeg Blue Bombers, Drew Wolitarsky, says Leidner’s play that day showed who he is.

“[Leidner] went in there with a short amount of time to prepare but was ready. He made plays, was reliable and that’s a true representation of who he is,” Wolitarsky said.

“People only see what happens during the games on Saturdays, but they don’t see the countless hours of film work, or extra work in the weight room,” Streveler said. “He was always one of the first guys in and last guys out.”

Streveler was the backup to Leidner on the Gophers, he said. Adding, they were close and constantly competing with each other, which made the team better.

“He’s an extremely hard worker, and being around a guy like that makes you want to work harder,” Strevler said.

Leidner was released by the Vikings after his appearance against the Dolphins, the Vikings’ final preseason game, but said he still appreciates the organization.

“It is truly a top-notch organization and the way they run things. I have nothing but good things to say about my time there,” Leidner said.

Since leaving The Spring League, Leidner decided to move from football to construction.