Fantastic geeks and where to find them

This past Friday, you would have found them at the Science Museum of Minnesota, decked out in their blackest robes and pointiest hats, wandering among different wizarding world-themed activities at the museum's first adult Wizard Camp-In. 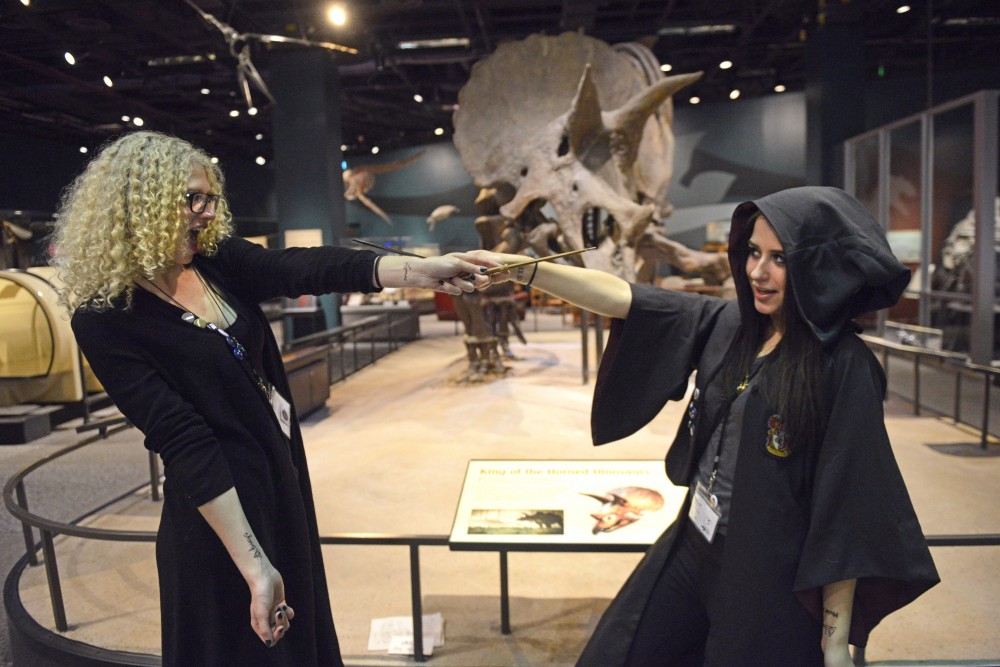 Hannah Doyle and Lindsey Bronson pose for a photo at the Wizard Camp-In on Friday, Sept. 29 at the Science Museum of Minnesota in St. Paul.

With nearly 300 people in attendance, the Great Hall — er, auditorium — was packed with Potter fans primed to drink Butterbeer and search the museum’s stalls for Moaning Myrtle.

There was something bizarre about adults in wizard costumes milling under a three-story inflated astronaut, but as event organizer Gail Fridlund said, “Fandoms are an interesting thing.”

Fridlund, manager of programs and special events at the Science Museum of Minnesota, coordinated the Wizard Adult Camp-In, which combined a massive fandom with the museum’s mission to raise awareness of the science in everyday life. And really, how many people can possibly own a t-shirt that says, “I solemnly swear that I am up to no good” on it? Answer: at least 30.

The event mixed fandom and physics, craft beer and Quidditch. The point of the Science Museum is to make science feel accessible. “If we all had cauldrons in high school, chemistry would be so much better,” Fridlund said.

The night began with a bang — and a crackle, and a fire tornado, thanks to Loud Mouth Science’s gregarious onstage demonstrations. The sparks remained when Fridlund brought a couple to the stage and a smiling girl with long blonde hair introduced the audience to a “tall glass of water,” i.e. her long-time crush and girlfriend.

And on stage, in front of a few hundred people, she proposed.

Even a pair of Potterbros (the Fred and George of the evening) swung through, ties wrapped around their heads, and sat themselves at the candle-making station. One pointed his wand at his candle, and said, “It will be LIT.”

Potter fans Jessica Frankovich, Heidi Kuhns and Emma Jaworski heard about the event when they met Fridlund at Thursday night trivia. Despite the fact that Frankovich is a Ravenclaw, Kuhns a Gryffindor and Jaworski a Slytherin, “We balance each other out,” Kuhns said.

One floor down, friends Briana McNamara and Tamara Bruns expressed their excitement about the evening. Most of the attendees preferred the books to the movies, of course. “You can use your imagination with the books,” Bruns said.

“You can use your imagination with the movies too,” McNamara said. “You can imagine they were better.”

Although part of the purpose of the event was to teach adults in Hogwarts uniforms that absolute zero is around -460 degrees Fahrenheit, the open bar also played a role.

Bruns giggled and pointed to her drink. “We’re drinking dragon’s blood,” she said.