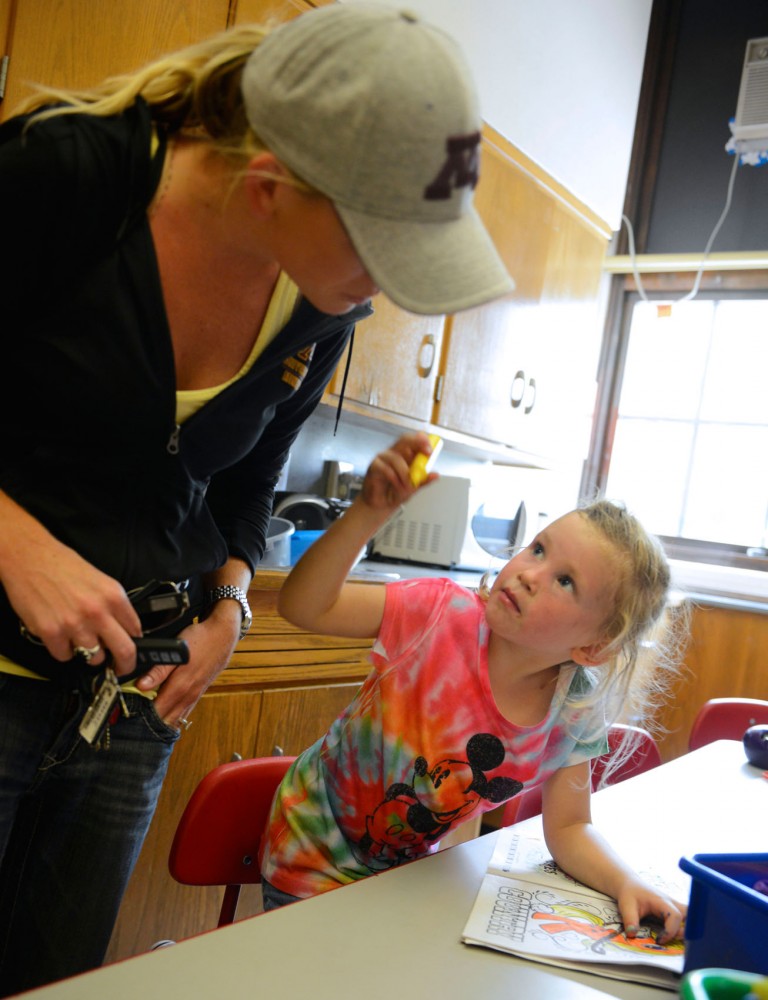 Fire-year-old Harlee Sheid tries to get her mother Stevie, a University student, at the after school program Minneapolis Kids on Monday afternoon in Minneapolis. Minnesota Public Schools are now offering all day kindergarten, which lessens the cost of child care for many parents.

Christa Johnson spends all of her wages on childcare for her 5-year-old daughter.

“I go to school full time and only work on the weekends, so literally my entire paycheck goes for paying for day care,” the family social science senior said.

A new state policy aims to alleviate that burden.

Gov. Mark Dayton signed a measure last year that made all-day kindergarten available to around 60,000 students this fall. Although the policy reduces the cost of child care, some University of Minnesota student-parents say their needs aren’t completely met.

Johnson said the measure cut child care costs for her daughter in half, but she said she’s still paying $120 a week for after-school child care.

At the University’s Child Development Center, a family with an income lower than about $55,000 would pay $820 per month for an older preschool student to receive full-time care during the work week.

Most parents carry the burden of expensive child care because the country and state have too few policies, like paid family leave, to help, said Catherine Squires, director of graduate studies in the University’s gender, women and sexuality studies department.

“We have an individualistic notion that families should take everything on themselves, socio-economic status aside,” she said.

That lack of support can be financially and socially crippling for many parents, and it often makes them choose between paying for child care and pursuing an education, Squires said.

She said all-day kindergarten is beneficial, but it’s also not enough.

Psychology senior Tandra Jefferson agreed. She said all-day kindergarten has made both of her children eager to learn, and more play time keeps her youngest excited for school. But she said there is more to be done, like making after-school child care programs free.

Having a job or another productive outlet outside of the home is good for mental health, Squires said, so even families who can afford to have a parent stay at home to care for children are often still adversely affected by lack of affordable child care.

Given her family’s financial situation, Johnson said she and her husband are often unsure who will watch their children because of the patchwork of providers, family and friends that they rely on for care.

And sociology senior Stevie Sheid was told her only option to cover child care costs for her daughter was to use welfare services.

“My paycheck was just enough to pay [for] her child care or live,” she said.

While family members covered some of the costs, Sheid said she had to take out a loan to cover the rest.

Although all-day kindergarten might not solve the child care problem, child psychology associate professor Kathleen Thomas said she thought it was long overdue. Many other countries already have the program, she said.

“From a cognitive development perspective, children who can continue to practice and work on their cognitive skills without large [half-day] gaps … are going to do better,” Thomas said.

“All-day kindergarten is really bringing us into the 21st century,” Thomas said.