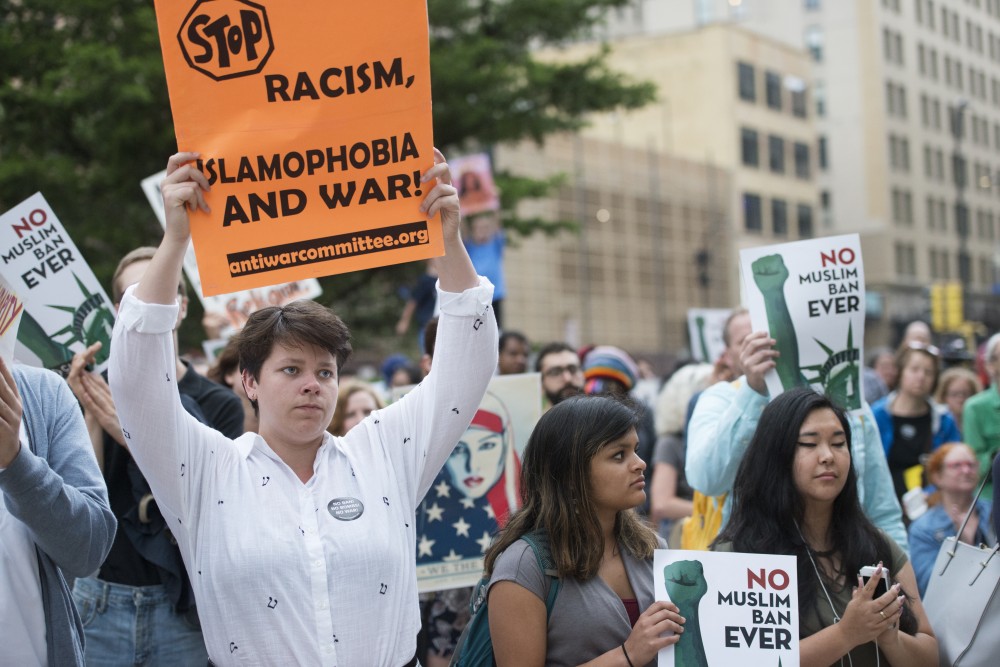 Lili Rochelle listened to Keith Ellison speak at the Minneapolis courthouse during a protest on Tuesday, June 26.

The U.S. Supreme Court’s June 26 decision to uphold the Trump administration’s travel ban has raised questions for many at the University of Minnesota.

The ban, which limits travel for people from seven countries, has many implications for some University members and has spurred national action on the issue since it was announced in 2017. The travel ban impacts Libya, Iran, Somalia, Syria, Yemen, North Korea and Venezuela.

“When I came here, I came with the hope that the U.S. … accepts others,” said Sarah Shueb, a Ph.D student from Libya, one of the countries regulated by the ban. “So when this ban happened… it’s like when you have a dream or an expectation of something, and it’s all shattered.”

The University’s Immigration Response Team has worked with those impacted by the ban since it went into full effect, hoping to provide support for current and prospective students who are unsure of their visa status, travel options or ability to continue with academic programs.

“[The ruling] maybe doesn’t change the content of the advice we’re giving [to those impacted] … but it changes the timeline,” said IRT Director Marissa Hill-Dongre. “There is less likelihood that it will be changed now in the short term than some people hoped before.”

Shueb said she is unsure if she will be able to attend an international academic conference this month in the United Kingdom for fear of being unable to re-enter the U.S. if she travels abroad.

“With a Ph.D, you want to focus on your research, focus on advancing your career… you don’t have time for this stuff,” Shueb said.

MSA President Simran Mishra said the idea surfaced in response to a culmination of immigration-related issues.

“Even if we can ensure physical safety [for those impacted], the emotional piece of not feeling welcome, of not feeling like you belong is something that… [is] not necessarily under the control of the University of Minnesota, but there’s so many things that we can do to support these students and try to bring a sense of normalcy back,” Mishra said.

The University’s International Student and Scholar Services has met with prospective international students and their families, many who have expressed concern about the country’s climate on immigration, travel conditions and anti-Muslim sentiment, said ISSS Assistant Dean Barbara Kappler.

“All of the things that happen when one is both an undergrad and graduate student — the life events, [like] if a student has a family member who is ill and they want to travel home to see them — all of that is impacted,” Kappler said.

The Supreme Court’s decision instigated a June 26 protest of more than 100 people at the Minneapolis Federal Courthouse where community members and lawmakers such as Rep. Keith Ellison, D – Minn, and Rep. Ilhan Omar, DFL-Minneapolis, spoke on the issue.

“We recognize as much as this is federal, this impacts local,” said Jaylani Hussein, executive director of the Council on American-Islamic Relations, which helped organize the protest. Protesters in the crowd shouted, ‘Hey, Trump, let’s be clear, Muslims are welcome here.’ “We want city leaders, we want state leaders to start to recognize that this… has a financial impact on the city, also it actually has many other impacts including the health and well being of their residents,” Hussein said.

Attendee Sandra McAnany said she and her granddaughter attended the protest to support friends.

“I have 10 grandkids [and] I think the political environment is really, really changing fast and I don’t want them to like look at me in 20 years and be like, ‘Well, what did you do?’’’ she said.