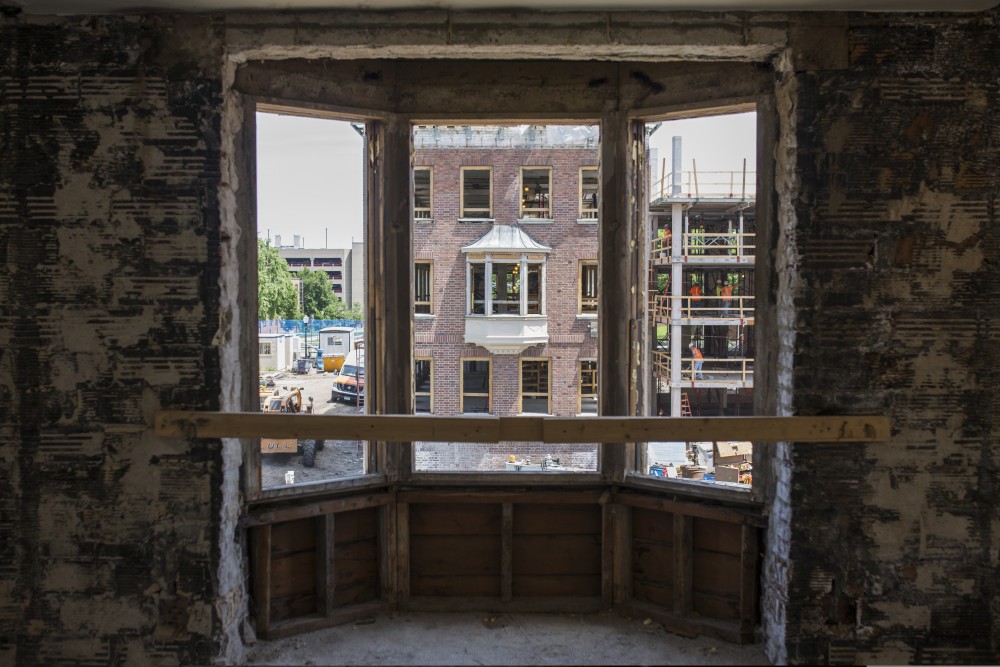 A view from the third floor of Pioneer Hall looking through a bay window during the dormitory's renovation on Thursday, June 14.

University of Minnesota students said they will remember Pioneer Hall’s quirks. It had a tub, rooms that were only accessible by multiple staircases and misshapen dorm rooms. Some students saw bats, cockroaches and many say they believed the dorm was haunted by a ghost.

The 88-year-old residential hall closed in spring 2017 for a two-year, $104.5 million renovation project. Construction is currently at the halfway point and is expected to be completed on time and on budget, with the goal to resume housing first-year students in fall 2019.

Residents took the room numbers off their doors as mementos to remember the infamous dorm.

Renovations aim to address concerns with the outdated building, including a lack of air conditioning, elevators and handicap accessibility.

“[The previous dorm] just does not meet today’s standards for residence halls,” Kevin Ross, a senior project manager with the University’s Capital Planning and Project Management, said of the building’s lack of accessibility.

Pioneer is the last University dorm to become handicap accessible, and Sanford Hall will now be the only without air conditioning.

Katelynn Mischler, a chemical engineering and chemistry junior who lived in Pioneer the year before renovations began, said the building’s interior was similar to a maze.

Mischler said she met all of her college friends living in Pioneer in part because of its structure.

“There was one way out of the building that … you always had to go back [out to leave],” Mischler said. “So even people that I passed every day, if their doors were open, you’d stop and say ‘hi.’” Several students said they got lost trying to navigate the dorm during the days following move in.

“Because Pioneer was the kind of building it was, it was just so quirky, it felt a little like the perfect place to film a college sitcom,” said Ben Philbin, a journalism junior.

Before becoming a residential hall, the building was a complex of townhomes, Ross said, explaining why room sizes and hallway width varied in the dorm’s original structure. Rooms in the renovated hall will be similarly sized with improved navigability.

“If someone had a larger room in Pioneer, it’s a really good chance it used to be a living room for the townhome,” Ross said.

The original townhome structure made it difficult to travel from one side of the residential hall to the other because each individual unit had its own entrance, Ross said.

“Everyone is familiar with Pioneer Hall, the iconic building – how it looked and how are we retaining that,” Ross said.

The housing portion of the renovations costs over $81.7 million, with the biggest expense being the restoration and preservation of the original building’s historic details, he said.

“Frankly, [tearing down the building] would have been more cost effective but probably not the right thing to do,” Ross said.

When completed, the building’s exterior appearance will retain its original look, including its gabled roof and paneled windows.

The dorm has not undergone any major reconstruction since it was built in 1930, which was a driving reason behind rumors that circulated among residents about the residence hall’s history.

“I heard that it used to be an… asylum,” Mischler said. “There were a lot of stories about that place.”

Many students claimed to have heard the resident ghost, Emily Rose, named after a character from a horror movie that was rumored to have been filmed at Pioneer Hall.

“We would always joke that [late night disturbances] were Emily coming into our room,” Mischler said.

Renovations will also move the dining hall out of the basement, creating a ground-level space to accommodate all Superblock students. The neighboring Centennial Hall’s dining hall will close once Pioneer opens.

The new dining hall will cost over $22.7 million and resemble the newer 17th Avenue Residence Hall’s dining facility, with multiple food stations that include pre-portioned food.

During the construction process, workers are taking students’ schedules into account, Ross said.

Many of the road closures around the construction site are intentionally scheduled for this summer.

Jaeger Kolstad, a sophomore and Frontier Hall employee, said numerous students complained about the noise of the construction during the academic year.

“Work times would start early in the school year, especially around finals week there were a lot of complaints about it, with students trying to deal with that noise while also dealing with finals,” Kolstad said.

To Kolstad, construction work has gotten louder and more noticeable since summer started.