Minnesota counting on its big men tonight against Purdue 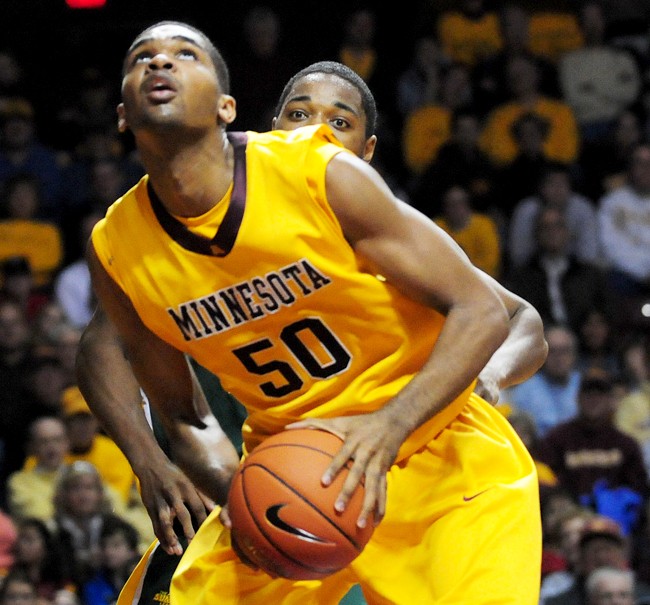 There was a question in the back of many Gophers fansâÄô minds, though it was hushed by the teamâÄôs winning. After a disappointing loss to unranked Northwestern on Sunday, itâÄôs more pertinent. What happened to the big guys? In SundayâÄôs upset, true freshman Colton Iverson scored twice in the first five minutes of the game and didnâÄôt score again the rest of the way. Fellow freshman Ralph Sampson III finished with two points. With No. 18 Purdue coming to Williams Arena tonight, at 6 p.m., the Gophers will have a size advantage in the post and a need to use it. âÄúWe really have to look to get the ball to the big guys,âÄù forward Damian Johnson said. âÄúTheyâÄôll have a height advantage. Colton hasnâÄôt been as involved as he used to, but I think heâÄôs going to get out of it.âÄù Against PurdueâÄôs man-to-man defense, Iverson and Sampson should have the chance to get some looks inside. TheyâÄôll go against Purdue sophomore JaJuan Johnson , who gives up size to both Iverson and Sampson. ItâÄôll be especially important for the two freshmen to contribute with senior center Jonathan Williams limited by a strained calf muscle. Head coach Tubby Smith said heâÄôll try to avoid having Iverson and Sampson on the floor at the same time. âÄúWe have to get the ball inside more, but âÄ¦ weâÄôre probably going to change our lineup some,âÄù Smith said. Since his 14-point game against Virginia on Dec. 2, Iverson has averaged less than four points per game. His rebounding has dwindled, too, with an average of less than two over the past five games. SampsonâÄôs scoring has been a little better, but not much. The problem, it appears, has as much to do with the offense as Iverson and Sampson individually. Against the zone defenses of Wisconsin and Northwestern, the team focused more on outside jump shooting, as Iverson had just one shot against Wisconsin in 17 minutes of play. âÄúOn any team, you need great guards to win,âÄù junior guard Lawrence Westbrook said. âÄúIf we have good guard play, itâÄôll be easier for them to get open down low.âÄù It worked against Wisconsin, but was their downfall against Northwestern, when they shot just 34.5 percent from the field in the second half and lost a three-point halftime lead. âÄúThe main reason we struggled is we werenâÄôt getting the ball to them as much as we shouldâÄôve been,âÄù Johnson said. âÄúColton scored a little bit in the first half, but we didnâÄôt get the ball back to him or Ralph in the paint, and that hurt us on the perimeter.âÄù Payton Suspended Smith announced Wednesday that the team suspended junior guard Kevin Payton indefinitely due to academic reasons. Payton has played in eight of the teamâÄôs 18 games and hasnâÄôt scored. âÄúItâÄôs very disappointing. But life is like that. You make your own bed and have to make some decisions,âÄù Smith said. âÄúBut hopefully heâÄôll get what he has to get done, done.âÄù