The ceremony was held Thursday at Ted Mann Concert Hall. 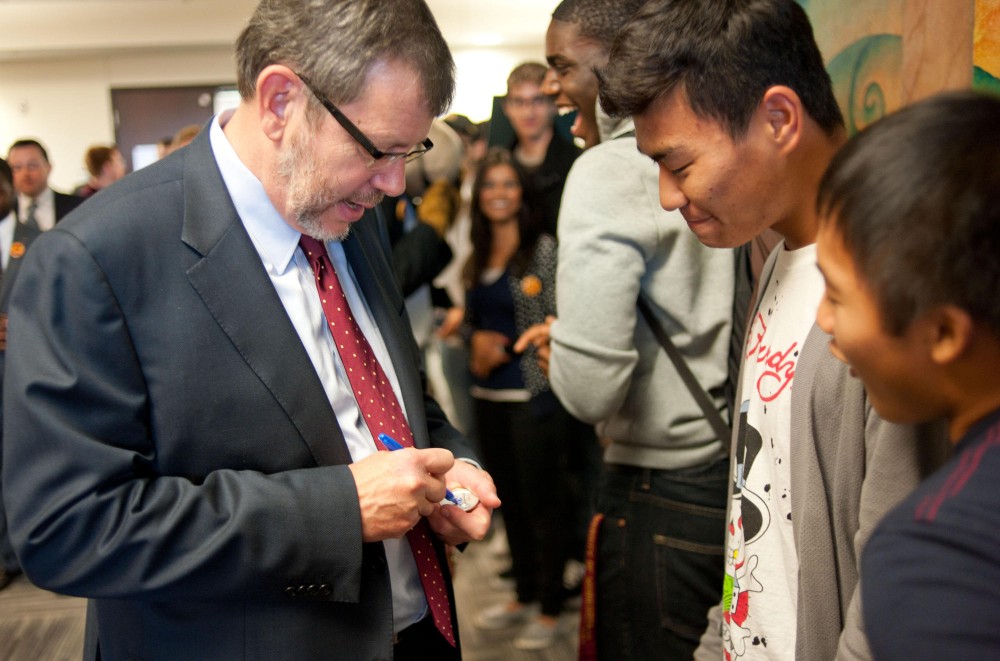 Kaler smiled, surveying the faces of faculty, staff, students, alumni and community members in the audience. He was about to be inaugurated as the 16th president of the University of Minnesota.

KalerâÄôs job technically started July 1. In the ensuing months, heâÄôs acquainted himself with the UniversityâÄôs coordinate campuses in Crookston, Morris, Duluth and Rochester, and allocated $50 million in unexpected special session funding from the Legislature âÄì- a third to tuition and the rest to hire faculty and revamp research programs.

Both Board of Regents Chair Linda Cohen and Gov. Mark Dayton praised Kaler for his commitment to the University from such an early point in his tenure.

âÄúDr. Kaler knows how crucial the University of Minnesota is to our stateâÄôs educational, social and economic vitality,âÄù Dayton said, stressing the importance of upholding MinnesotaâÄôs traditional investment in education.

âÄúIf you have all your eggs in one basket, youâÄôd better take mighty good care of that basket,âÄù Dayton said, recounting a favorite phrase of his father.

With that, Dayton handed Kaler the University mace, a symbol of leadership.

âÄúMay you lead it to greatness,âÄù he said. The crowd gave a standing ovation as Cohen presented Kaler with the medallion of the president.

Now officially at the helm of the University, Kaler faces years of diminished state funding and the pressing need to do more with less.

Kaler outlined his plan: Convince the Legislature, the citizens and the Minnesota business community that investment in the University is worthwhile.

âÄúFrom the pacemaker to the black box, from open heart surgery to Honeycrisp apples, the UniversityâÄôs history is rich and profound,âÄù Kaler said. âÄúIf we donâÄôt investâÄ¦we absolutely will not discover new things. Instead, we will wither as a university, and we will decline as a state.âÄù

Amid accusations of administrative bloat, Kaler promised to cut the size of the administration each year heâÄôs president. But that doesnâÄôt mean faculty gets a free ride âÄì efficiency among and within departments will also be evaluated.

âÄúIf your research is stale, if your classroom is boring, if your community engagement is ineffective, you must reinvent yourself, or, frankly, you must step aside,âÄù Kaler said. âÄúAs you expect me to deliver on my job, I expect you to deliver on yours.”

Furthermore, Kaler wants to make the University of Minnesota one of the top three publicresearch institutions in the country âÄì a point former president Bob Bruininks stressed throughout his presidency.

âÄúHe seems to have a beautiful vision for how to carry (the University) forward,âÄù said Stanley Sandler a University of Delaware faculty member who worked closely with Kaler at that institution. As a researcher and Minnesota alumnus, Sandler praised KalerâÄôs commitment to streamlining administration and focusing on faculty research. âÄúHe faces a challenging time.âÄù

Ifrah Esse couldnâÄôt speak English when she immigrated from Somalia at age 11. That didnâÄôt stop her from graduating from the University in 2008 with a bachelorâÄôs in sociology. Now, sheâÄôs a sourcing specialist at Target.

The University must take advantage of this diversity, Kaler said. By 2035, about half of the Twin Cities population will be minorities.

âÄúI was really pleased when he talked about the importance of diversity,âÄù said Njeri Githire, a professor of African American and African studies at the University, after KalerâÄôs speech.

Githire tries to emphasize diversity in the Twin Cities community in her classroom. Many of her students are elementary education majors who need to be prepared for MinnesotaâÄôs future, she said.

âÄúI can think of no community, no challenge, no classroom that is not enhanced by diversity,âÄù Kaler said.

That also means supporting Minnesota students âÄì part of the mission of the land grant university. Kaler introduced Kenny Deutz, who grew up on a farm in Marshall and is now studying to become a veterinarian.

The University should support a range of academic programs, too. Kaler has voiced strong support for the health sciences since his term began, but his inaugural speech also spoke for the liberal arts.

âÄúAmerican public education is the envy of the world because students get a core in the humanities,âÄù Kaler said. âÄúThe ability to reason and criticize is essential to our democracy and civil society.âÄù

KalerâÄôs inauguration cost $170,500, including everything from campus crawls, decor, events, facility rental and meals.BruininksâÄô 2002 inauguration was scaled back to $100,000 in comparison to his predecessor, Mark YudofâÄôs at $185,000. Inaugurations have traditionally been privately financed, said Jeff Falk, assistant director of University News Service.

The ceremony was live tweeted by 16 âÄúsocial media ambassadors,âÄù students chosen to tweet along with KalerâÄôs inaugural week. The University estimates it was the most watched presidential inauguration in the schoolâÄôs history.

To date, Malcolm Moos (1967-1974) and Kaler are the only twoalumnito have served as president.

âÄúWhat am I doing today to improve the lives of our students and our stateâÄù is a question every person connected to the University should be asking themselves daily, Kaler said. To underscore that commitment, Kaler announced the establishment of the Kaler family scholarship, which will support four University undergraduates each year.

Bells on the West Bank rang as KalerâÄôs inaugural ceremony let out.

“Together, we can re-invent the land grant vision of the 19th century to meet the global needs of the 21st century,âÄù Kaler said