Minnesota came in third as a team and narrowly missed out on the NCAAs. 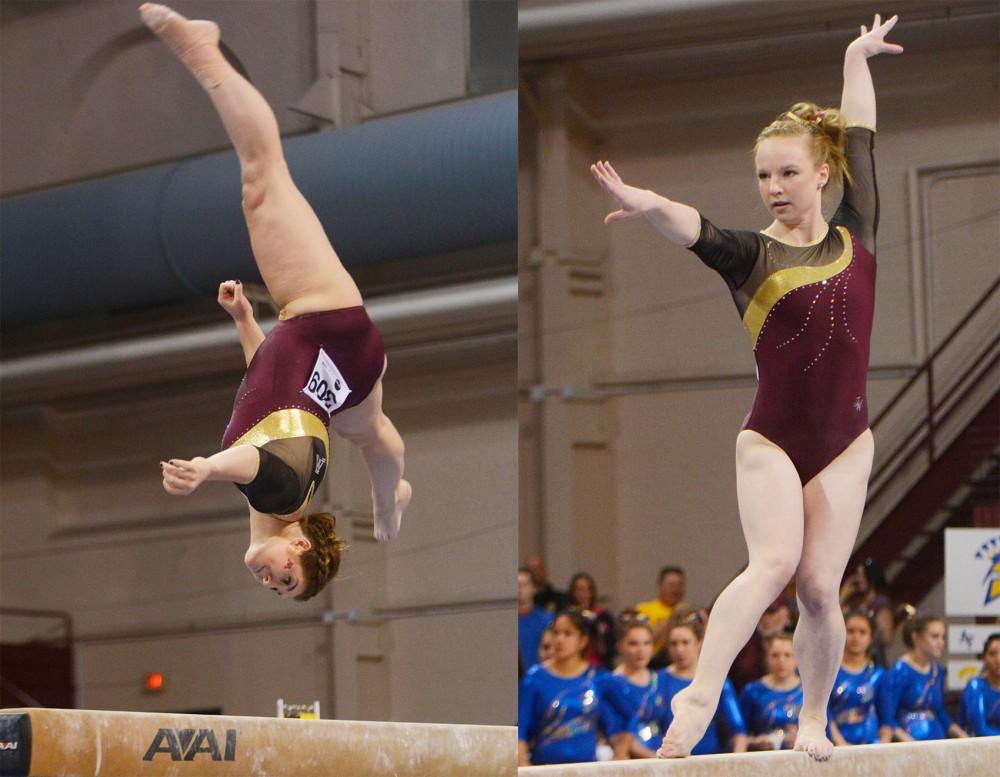 Hanna Nordquist, left, and Lindsay Mable, right, execute their beam routines at the NCAA Regional competition at the Sports Pavilion on Sunday. Nordquist tied for first on the balance beam with teammate Lindsay Mable and both qualified for the NCAA Individual Event Finals.

On the biggest stage of the season, the Gophers women’s gymnastics team fell just short in its attempt to reach the NCAA championships.

Minnesota couldn’t match performances from Oklahoma and Illinois on Saturday as it finished third at the regional meet, one spot short of advancing as a team.

“We gave it 100 percent effort, and we came up a little bit short,” head coach Meg Stephenson said.

Though the team failed to advance, sophomores Lindsay Mable and Hanna Nordquist both qualified for the individual portion of the NCAA meet.

Mable won the all-around title, and Nordquist tied for first on balance beam.

“It’s a big honor for us to both go and represent the University in the best way we can,” Mable said.

Mable’s 39.4 in the all-around exceeded her season average.

“I just enjoyed every moment that I could,” Mable said. “It was about loving that we were back here in the [Sports Pavilion] and that we had all of our fans behind us. We just came together and did what we could.”

While Mable’s success may not come as a surprise, Nordquist’s performance was remarkable.

Nordquist hadn’t competed since late February due to an undisclosed illness. The road to recovery was difficult, she said.

“I did a lot of mental training on my own,” she said. “I really only did about three routines in the last month on beam, so that was a little bit more challenging.”

Though she said she was nervous before her beam routine, Nordquist looked collected as she dismounted and scored a 9.9.

“She’s been incredibly strong, both mentally and physically,” Mable said. “She did exactly what she needed to help the team.”

Junior Cierra Tomson’s return from an upper-back injury proved to be equally important.

After senior Kayla Slechta helped the team get off to a hot start on vault with a 9.9 score, the team faltered a bit on uneven bars.

“You get one chance, and sometimes it’s not what you hope for it to be,” Mable said, “but I’m extremely proud of the whole bar team. We pushed through.”

Tomson closed out the event on a high note for her squad. She delivered an impressive performance as the final member of the uneven bars lineup, and her 9.875 kept the group’s chances alive until the very end.

“That was a very big pressure situation for her, and she handled it like a champ,” Stephenson said. “I was incredibly proud of her on every event tonight.”

In the end, the Gophers couldn’t score high enough throughout the rest of the regional meet and missed out on the NCAA meet by 0.25 points.

“We knew we were up against some great competition, and we needed to have a stellar performance,” Stephenson said. “We just didn’t have as good of a performance as Oklahoma or Illinois.”