Roadwork may paint over U tradition

Recent construction on the Washington Avenue Bridge may affect the September Paint the Bridge event. 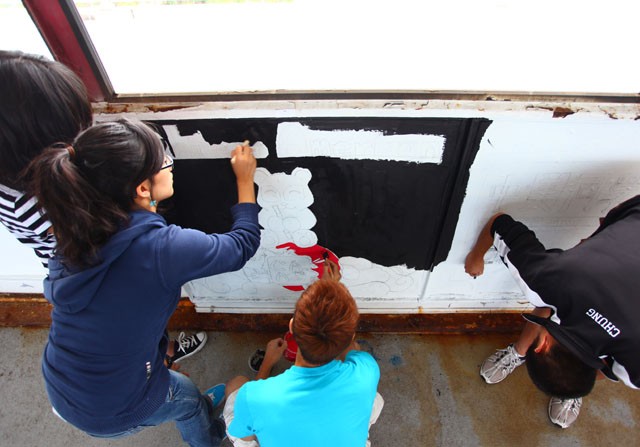 Members of the Chinese American Student Association paint a mural on the Washington Avenue Bridge on September 9th. Due to the safety conditions of light rail construction, the famous Paint the Bridge may not happen next fall.

Recent construction on the Washington Avenue Bridge has not just affected traffic, it may also bring an end to a colorful University of Minnesota tradition.
As light-rail construction continues, the annual Paint the Bridge event in September âÄî when student groups join to paint their designated section of panels on the bridgeâÄôs inside walls âÄî is in jeopardy, chiefly due to safety concerns.
Debra Anderson, program director for Student Unions and Activities, said the department is still determining the traditionâÄôs status.
Currently, half of the bridge is open for pedestrian traffic. ItâÄôs the same half that is available for vehicle traffic as construction continues on the eastbound lanes.
âÄúBecause of that, we donâÄôt know if weâÄôll have access to both sides of the bridge,âÄù Anderson said.
Sandy Cullen, the light rail project manager for University Parking and Transportation Services, said construction on each half of the bridge is expected to last about a year. Once construction on the south side is complete next year, it will move to the north side.
There will always be one side of the bridge open for both vehicle traffic and pedestrian traffic, Cullen said.
But if construction limits access to one side of the bridge, there will only be half as many panels available for student groups to use.
Both Cullen and Anderson said that in an ideal world, both sides would be available for students to paint, but groups may have to prepare for the canvas to be halved.
âÄúItâÄôs better than nothing,âÄù Cullen said.
She said she has yet to ask the contractors about the matter.
Cullen said weather and progress made could affect safety conditions, so itâÄôs difficult to predict what the status of construction will be come September. Safety will play a big role in the process, Anderson said, but student groupsâÄô views will âÄúcertainly affectâÄù the decision.
For special interest groups, the wall painting means easy publicity.
Andrew Graham, president of Minnesota Association of Zombie Enthusiasts, said his group was planning to paint a panel next year.
âÄúFor us personally, I donâÄôt know if itâÄôs our number one way of getting people, but it definitely helps,âÄù he said.
Paintball Club President Caleigh Souhan said her group gets about 15 people a year interested in the club because of the panel. Even while painting, the club benefits from Paint the Bridge.
âÄúWe have a lot of people come up and start asking questions,âÄù Souhan said. âÄúItâÄôs a good way to get interest going on a personal basis.âÄù
The Paintball Club depends heavily on membership participation, especially to fund trips to regional and national competitions. Souhan said the free exposure Paint the Bridge provides would be missed.
âÄúAt a school like the U, you canâÄôt possibly contact everyone,âÄù she said. âÄúItâÄôs just a big way we get publicity.âÄù
Paint the Bridge also serves as a fun member activity, both Graham and Souhan said.
âÄúItâÄôs just a fun thing to do with your group,âÄù Graham said.
âÄúWe have a lot of people that always come out and help out, so itâÄôs a collaborative effort,âÄù Souhan said. âÄúItâÄôs kind of like the way we start off our season and the next year.âÄù
Student groups can paint a panel for free after registering for a spot with SUA. But next yearâÄôs registration date isnâÄôt set because a decision on Paint the BridgeâÄôs fate is yet to be made.
Anderson said she anticipates SUA will follow the first-come, first-served procedure as it has in the past, even if the panels are limited. Groups have been allowed up to three panels.
Either way, Graham said he hopes the University is able to keep the event alive.
âÄúItâÄôs a good tool,âÄù he said. âÄúMost people at the U go across that bridge, and itâÄôs a long bridge, so you look at the pretty things painted on the wall, and something will catch your eye.âÄù