Researchers say it could help people with disabilities. 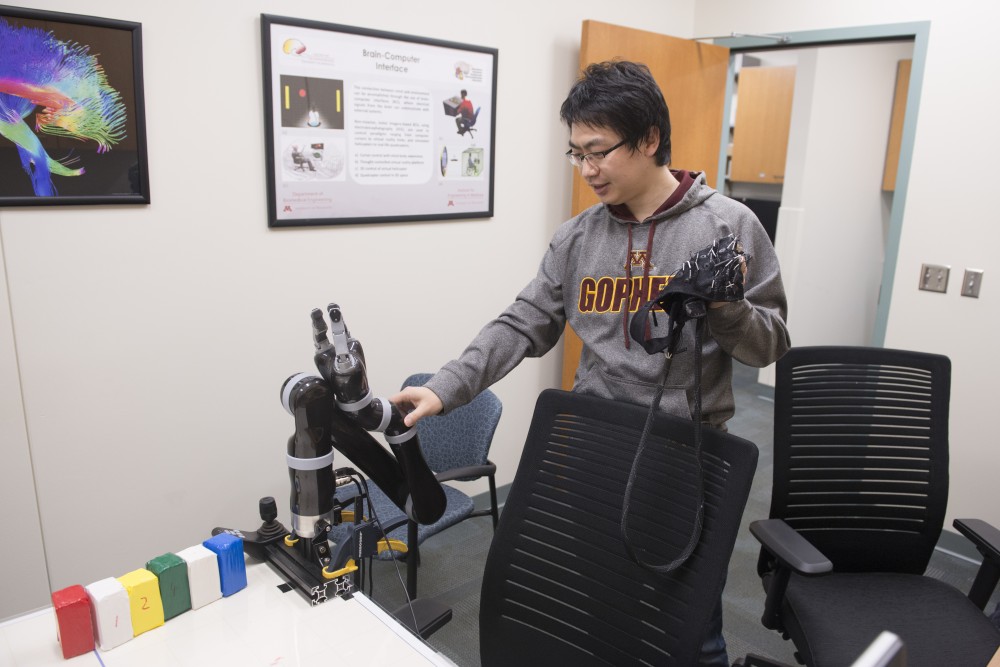 University of Minnesota researchers have developed a non-invasive method that allows users to control a robotic arm with their minds.

The technology could allow people with spinal cord injuries or other disabilities to be more independent. In the future, the lab behind the research hopes to expand the project to include more parts of the body.

To use the device, a user has to imagine the movement they want to perform. The brain generates electrical activity, which is recorded through an electroencephalography cap, which maps brains signals.

“Imagine a left hand or right hand moving and then translating it to an arm,” said Bin He, principle investigator and biomedical engineering professor at the University.

After a computer program analyzes and decodes the generated signals, the robotic hand moves accordingly in any direction.

The research is an accumulation of decades of He’s research, which focuses on brain computer interface. He has also done research using MRI technology.

More than 70 percent of the study’s subjects — volunteers from the University — succeeded in moving a cup from a table to a shelf about four feet away. Eventually, all the volunteers were able to accomplish the task but not necessarily within the time constraint, He said.

This isn’t the first effort to control an object through brain signals, but it is the first to be non-invasive, He said.

Other devices require drilling holes in a subject’s skull, said Jianjun Meng, a University postdoctoral researcher and lead author of the December study about the arm.

Invasive methods have their own advantages, like cleaner signals, Meng said. Only about 10 patients have used the implantation method, he said.

All implantation methods use brain surgery to place a chip into the brain. There are risks involved in putting in and removing the implant because of the complex procedures, Meng said.

Other studies have focused on moving in a 2D plane. He’s research focuses on movements in a 3D space, making it more effective for its users.

The scientists say they hope to make the arm’s movement more fluid with further research.