Because behind every good bar is a bathroom where all the dirty work gets done. 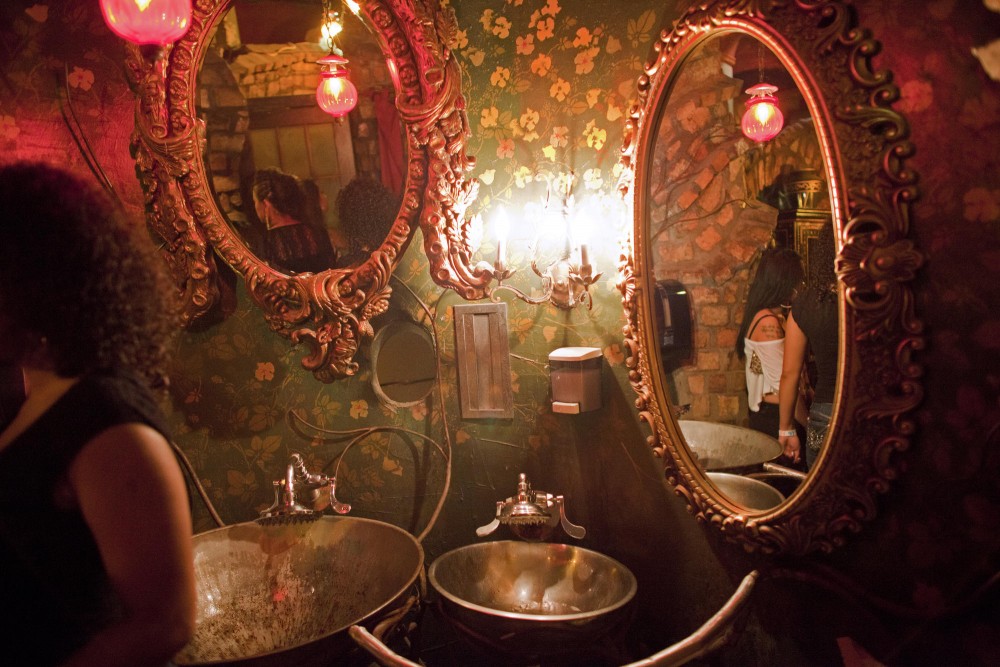 The mirrors enhance the rich ambience of the women's bathroom at Loring Pasta Bar Saturday evening.

George Costanza may know where the best public toilet is anywhere in New York City, but when you’re wasted and miles away from any place where Seinfeld references can save you, it’s time to familiarize yourself with a couple local watering holes’ watering holes. Yes. Those kind of holes.

Because after a night spent poundin’ Jack & Cokes and filling your bladder with the best damn poison in town, you’re going to need some serious serenity, and you’re definitely going to need it now.

The Nomad’s bathroom âÄî with its shiny black walls and glaring fluorescent lights âÄî has graffiti, but it’s confined to the toilet paper, soap and paper towel dispensers. It’s as if to say, âÄúTonight, we’ll get rowdy. But not too rowdy,âÄù despite the fact that both the menâÄôs and womenâÄôs bathrooms give you the feeling that you have been transported from the easy and pleasant atmosphere of the pub into the back room of True Blood’s âÄúFangtasia.âÄù

However, the toilets with tanks and lids are a nice nod toward domestic coziness if you can ignore the circa 1923 destitute boarding house-styled porcelain trough in the men’s room.

Rest assured that the extended version of grandma’s sink is full of ice, and also may serve as a decent place to curl up into a moaning, sweaty ball of inebriation until your friends peek in and tell you it’s bar close.

The bathrooms at the Triple Rock feel as though they were constructed and decorated by your hard-boiled and guarded yet sentimental uncle. He wants to provide you with all the amenities of the life you were forced to leave behind, but decades of hardship, constant drinking, smoking and stained muscle shirt-wearing fogs his vision of what an accurate picture of comfort would look like.

With pink and gray tile flooring, pink tiled walls, messy blue-gray wall paint and blood-red stalls, the women’s bathroom is a thrown-together affair. The detached tampon bins on top of the toilet tanks seem to capture the image of the uncle saying, as if to get it over with already, âÄúHere. For your âÄ¦ stuff.âÄù

The men’s bathroom is similar, with gray floor and wall tiles, urinals and a complete toilet paper roll holder thatâÄôs been pried from the wall and placed on top of the toilet. It’s a distinct but effective message to you fellas to just, y’know, wipe yer ass when you’re done. For all its grittiness, however, the bathrooms are fully stocked (thanks uncle). Also, all the toilets have lids in case you want to cover up the last bits of vomit that just won’t flush down anymore.

Don’t be fooled by this burrito establishment and beer hall’s playfully decorated exterior. Its water closets are a slapdash hybrid of restaurant-barroom amenities in tandem with pathological commitment problems.

The men’s room is awash in the default choice of black paint, and the posters that dot the walls include one above the urinal that combines beer and football, as if to boost confidence while you drunkenly pump yourself back up and prepare for the next phase of your stage show.

It might be hard to stay in there long, however, seeing as it has an unidentifiable lingering odor that is most like the smell of uncooked corn dough and urine. If these walls could talk, they’d probably say, âÄúStop pissing all over me, bros.âÄù

The faux-overwrought mirror frame and upper-lower-end light fixture in the women’s room signify Loco’s sparse attempts to class it up and lend themselves to a look that can be described as freshly-looted Menard’s chic.

The eatery-drinkery should really take the bathrooms up top to the bar crowd, however. The prospect of stumbling all the way down a full flight of stairs before making it to the toilet can muck up what could otherwise be a quick sojourn to urination.

In an economical but stylistic twist, there are no gender-specific bathrooms in the Kitty Cat Klub, save the urinal room. The toilet stalls are set against one wall of the basement like dressing rooms to be shared among all, hopefully attractive, patrons. U-N-I-sex, am I right?

With dim red lighting, embellished wooden mirror frames and black and red slatwall stall partitions, the bathroom is more like a wild west brothel with Wonderland’s Alice as its madame. The reverse black bowl and white lid toilets offer a touch of class and confirm that goin’ to let ‘er fly is no reason to shed your pretensions.

Against all odds, the Klub has made the semi-public restroom an aesthetically pleasing affair. It’s totally not the place to stick your chewed gum under the seat or scrawl your name on the door, but its ample mirror selection gives you a chance to reassess your appearance, albeit in front of everyone else.