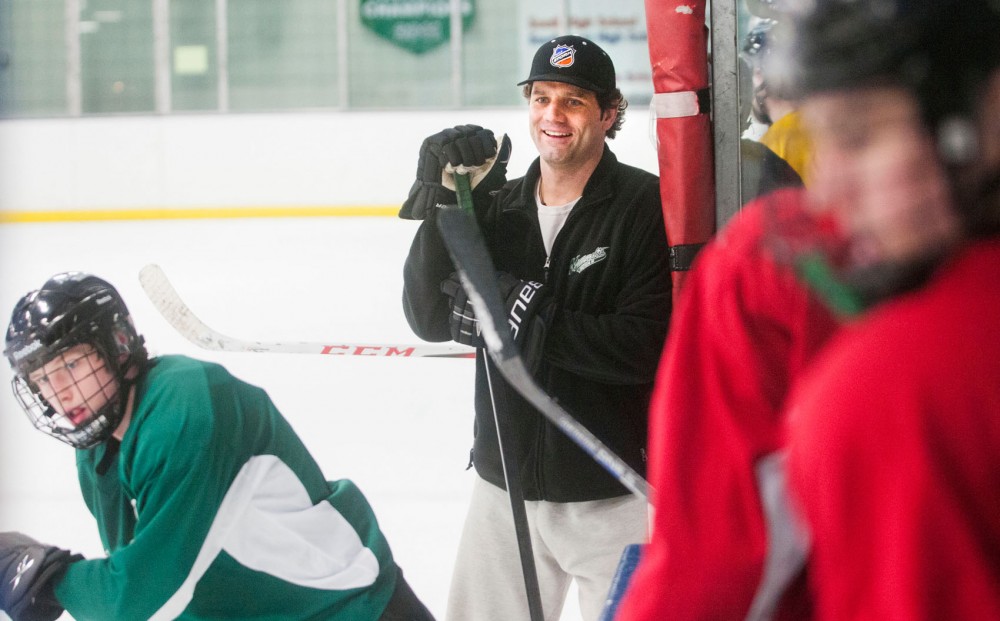 Joe Dziedzic is the last Minneapolis public high school graduate to play hockey for the Gophers.

If there’s another one, he’ll likely have something to do with it.

He grew up in Minneapolis, and his family has long been involved in the city’s politics. His father Walt was a longtime city council member, and his sister Kari is a state senator.

Dziedzic was a blue-chip football and hockey player at Minneapolis Edison High School. He played four years at the University of Minnesota and three seasons in the National Hockey League.

Now, Dziedzic is trying to revive hockey’s popularity and the high school program in his hometown.

Minneapolis once had a rich hockey culture, but the sport’s popularity tailed off when the programs in the city’s schools began to fail.

Only 36 kids from the city’s seven schools tried out for the Novas this season.

“Minneapolis probably had its heyday in the mid-to-late ’70s,” Dziedzic said. “The slide probably started after 1990. That’s when it really started to go downhill.”

This year, Dziedzic’s first as head coach, the Novas won their conference with a 20-4-1 record. They’ll play Minnetonka in the first round of their section playoffs Thursday.

Rebuilding Minneapolis hockey is a long-term project, and Dziedzic plans on seeing it through. Right now, the Novas play in the Two Rivers Conference, one of the weakest in the state.

They’ll be switching to the more competitive Tri-Metro Conference next season.

“It’s not a quick fix,” Dziedzic said. “If we can make it through the next two or three years here, we’re going to turn the corner.”

Low numbers are one of several problems Dziedzic and his staff face. Top hockey players leave Minneapolis to play at the top suburban and private schools, which typically have more talent and better facilities.

“You still find families that want to live in Minneapolis — they like that quality of living,” Novas assistant coach Tom Chorske said. “But then they’ll also have the means to maybe send their kids to private schools.”

Chorske graduated from Minneapolis Southwest, played for the Gophers and spent 11 years in the NHL. He said an influx of minorities has also affected the growth of Minneapolis’ high school hockey program.

But the city’s youth program, the Minneapolis Storm, is thriving. Dziedzic said numbers for the Storm are at an all-time high.

If young players stay in the program, Dziedzic said the future is bright.

“We have some good kids,” he said. “They just need an opportunity.”

Novas star winger Henry Christman is getting plenty of chances. The Novas captain finished the regular season ranked second in the state with 79 points.

Christman was talented enough to leave for a suburban school, but he opted to stay and play for the city. He said Chorske and Dziedzic’s status as Minneapolis natives resonates with the players.

“In 10 years, if I look back and see that they won a state championship, I’m going to feel that I was kind of a part of that, and that I helped build this program,” Christman said.

Minneapolis athletic administrators had been recruiting Chorske to coach the Novas for years.

Chorske said he wasn’t ready to lead the operation solo, but when Dziedzic accepted the job, he joined him.

“When [Dziedzic] took the reins, it felt like an opportunity where I could support him and I could assist him,” Chorske said. “We’re confident that, together, he and I would have a pretty strong impact on preserving the state of city hockey and hopefully moving forward.”

Dziedzic played nearly every sport as a kid, but he made a name for himself by tearing up the rinks and gridirons in Minneapolis.

A two-sport star at Edison High School in the city’s Northeast neighborhood, he began receiving attention from major college programs as early as his sophomore year.

Though he was gifted athletically, Dziedzic said he never considered transferring to another school.

“I always wanted to play with my buddies that I grew up with,” he said. “We had some good teams.”

Michigan, Southern California, and California-Los Angeles were a few of the big-name programs that recruited him to play football.

By his senior year, the 6-foot-3, 215-pound Dziedzic was the state’s top football and hockey player and had to make a difficult decision about which sport to play in college.

“The football practices are brutal. Hockey was so much more fun to practice,” he said. “I wanted to be a bigger hockey player rather than an average-sized football player.”

He said his goal was to play hockey for the Gophers and when they came-a-knockin’, he couldn’t pass it up.

He was named Star Tribune Metro Player of the Year his senior season, and months later he won the prestigious Mr. Hockey award.

Both teams finished a game away from the state tournament.

“It’s more special when you do it with the guys you grow up with your whole life. I knew them all since I was 6 or 7,” he said, “It was a tight-knit group.”

A few months before Dziedzic was set to join the Gophers, he was drafted by the Pittsburgh Penguins in the third round of the 1990 NHL Draft.

The adjustment to college wasn’t easy. Dziedzic played in only 20 games as a freshman and finished with 10 points.

He said in hindsight, a year of junior hockey would have benefited him.

But he adjusted to the college game by his sophomore year and played in 37 and 41 games in his sophomore and junior seasons, respectively.

He was poised to break out as a senior, but he fractured his wrist the second game of the season. He returned eight weeks later, only to break it again.

“I was finally hitting my stride as a player,” he said, “Kind of a bittersweet finish to my career.”

Dziedzic had to have a nine-inch titanium rod inserted into his arm to hold the fracture in place. The injury took about a year to recover, and for a while he thought it would jeopardize his pro career.

But the injury didn’t discourage the Penguins from signing Dziedzic, and by 1995 he was on the roster alongside his boyhood idol Mario Lemieux

“It’s kind of a surreal deal,” Dziedzic said. “You got a job to do and it’s intense, but you’re also trying to enjoy the moment a little bit. It was basically a dream come true”.

He played in the Penguins organization for four years before signing with the Phoenix Coyotes in 1998.

But midway through the 1998-99 season, he got into a fight that changed his life.

“A guy’s finger went in my eye,” he said. “My retina had collapsed.”

Dziedzic had surgery to repair the injury, and it forced him to retire. Doctors told Dziedzic that he could risk further vision loss if he played again.

Now, he wears a powerful contact lens over the injured eye.

“I still had some hockey left in me,” he said. “It was a tough one to get over.”

Dziedzic returned to the University of Minnesota after his playing career and finished his degree in speech communications with hopes of becoming a TV analyst.

While finishing his degree, Dziedzic started helping out with local hockey camps. Soon after, Dziedzic opened up his own training center, JDHockey Camps.

“More than anything, it’s just my passion and love for hockey that keeps me doing what I’m doing,” he said.

“[Dziedzic] has all the skills. He knows the game really well,” Bjugstad said. “He’s been through it all.”

In 2010, Dziedzic accepted the head coach position at St. Paul Academy, where he coached for two seasons before accepting the job with the Novas.

“I’ve kind of come full circle. I grew up playing in the city. I made the climb up the ladder to play college and pro,” he said. “To come back in the city where it started … it means more.”