Gov.’s mansion open for the holidays

Open for tours seasonally, the Summit Avenue home is richly decorated for Christmas. 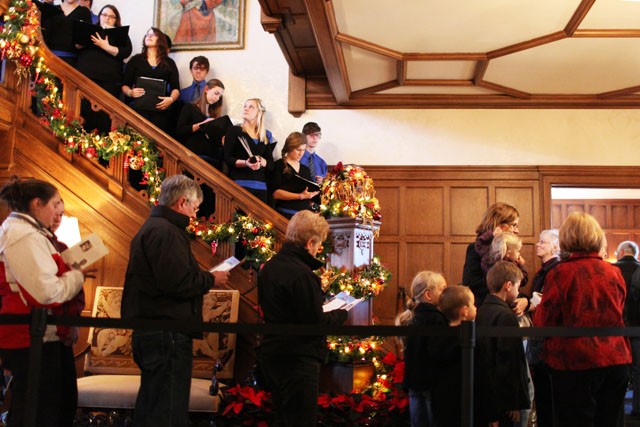 Members of the public attend the open house held Tuesday at the governor's mansion in St. Paul. Visitors toured the nearly 100-year-old landmark for their recently opened holiday open house.

Gazing at a âÄúgleaming bowlâÄù situated on the dining room table of the Minnesota GovernorâÄôs residence, Burnsville resident Lou Swedeen exclaimed, âÄúOooh, now I want to go home and decorate!âÄù
âÄúIâÄôm psyched,âÄù she said, explaining she had come with her boyfriend to tour the house.
A line trailed out the door of the Summit Avenue residence in St. Paul as visitors waited to see the holiday decorations and experience a historic state treasure.
The GovernorâÄôs residence will be open to visitors the next two Tuesdays. Annually, more than 15,000 visitors pass through the nearly century-old mansion. On average, between 300 and 400 visitors travel to the residence daily for the holiday open house.
âÄúI wanted to see it in December for Christmas,âÄù said Catherine Enderlin, a University of Minnesota nursing student who visited the mansion on Tuesday with her sister.
The home serves a dual purpose, said Andrea Hart Kajer, chairwoman of the GovernorâÄôs Residence Council. ItâÄôs not only a state building, but also the âÄúpeopleâÄôs homeâÄù for all Minnesotans to enjoy.
Legislators created the Council to advise state officials on the residenceâÄôs âÄúpreservation, renovation and maintenance.âÄù
âÄúIt is a beautiful historic building and I think itâÄôs important for Minnesotans to preserve the pieces of history that are entrusted to the citizens,âÄù Kajer said.
Currently, Gov. Tim Pawlenty occupies the house.
Since the building is turning 100 next year, Mary Shaffer, an American Institute of ArchitectâÄôs representative to the Council, has been working for nine months on a plan to make the mansion more environmentally friendly.
The roughly 16,000-square foot residence is in good shape, according to current analysis, Shaffer said. Temperature-sensitive photos taken by volunteers show very little heat escaping from the building. The heavy masonry walls trap heat in the winter and keep it cool in the summer, she said.
ShafferâÄôs committee, which features LEED-accredited professionals and historical experts, is focusing on small changes that can be made without significantly altering the buildingâÄôs structure.
ItâÄôs designation by the National Register of Historic Places in 1974 makes the residence much harder to alter.
âÄúIt is a historic building, it was donated to the state,âÄù Shaffer said, âÄúThe whole story is a nice story, so we donâÄôt really want to change that.âÄù
The committee produced a report detailing changes in heating and cooling, appliances and material use to make the building more sustainable.
The team is looking to reduce the buildingâÄôs roughly $40,000 yearly energy costs, cut water consumption and reduce waste.
Shaffer said they consulted other states when compiling recommendations, which canâÄôt be acted on until the next governor reviews them.
Likewise, cost estimates for the improvements, which would appear gradually, canâÄôt be made until the new governor orders more detailed building assessments.
The current gubernatorial recount between Republican Tom Emmer and Democrat Mark Dayton obscures the future of the renovations.
But the holiday tradition continues.
âÄúItâÄôs a great community thing,âÄù Residence Manager Amanda Simpson said. âÄúI love for everybody to see the house and appreciate it.âÄù
About two months of planning goes into readying the mansion for holiday open house, Simpson said. ItâÄôs also open in June, July and August for guided tours by the Minnesota Historical Society.
Staff âÄúdecks the hallsâÄù for about two weeks straight and floral decorators from around the state converge on a Saturday to put on the finishing touches for the holidays.
The donated decorations include a Christmas tree that nearly scrapes the âÄúdrawing roomâÄôsâÄù ceiling.
The mansion, donated to the state in 1965 by the Horace Hills Irvine family, has hosted nine governors. DFLer Karl Rolvaag was the first to move in during his only term in 1966.
Irvine commissioned the house in the early 1900s. Designed by Minneapolis architect William Channing Whitney for the St. Paul lumberman, construction on the house finished in 1912. It cost an estimated $50,000.
The residence âÄúis a magnificent 20-room English Tudor home with seven
bedrooms, nine bathrooms, two sleeping porches and eight fireplaces,âÄù according to the 1006 Summit Avenue Society, a nonprofit organization dedicated to preserving the home.