Freshmen liberos Lindsey Lawmaster and Kalysta White use their lively personalities on and off the court. 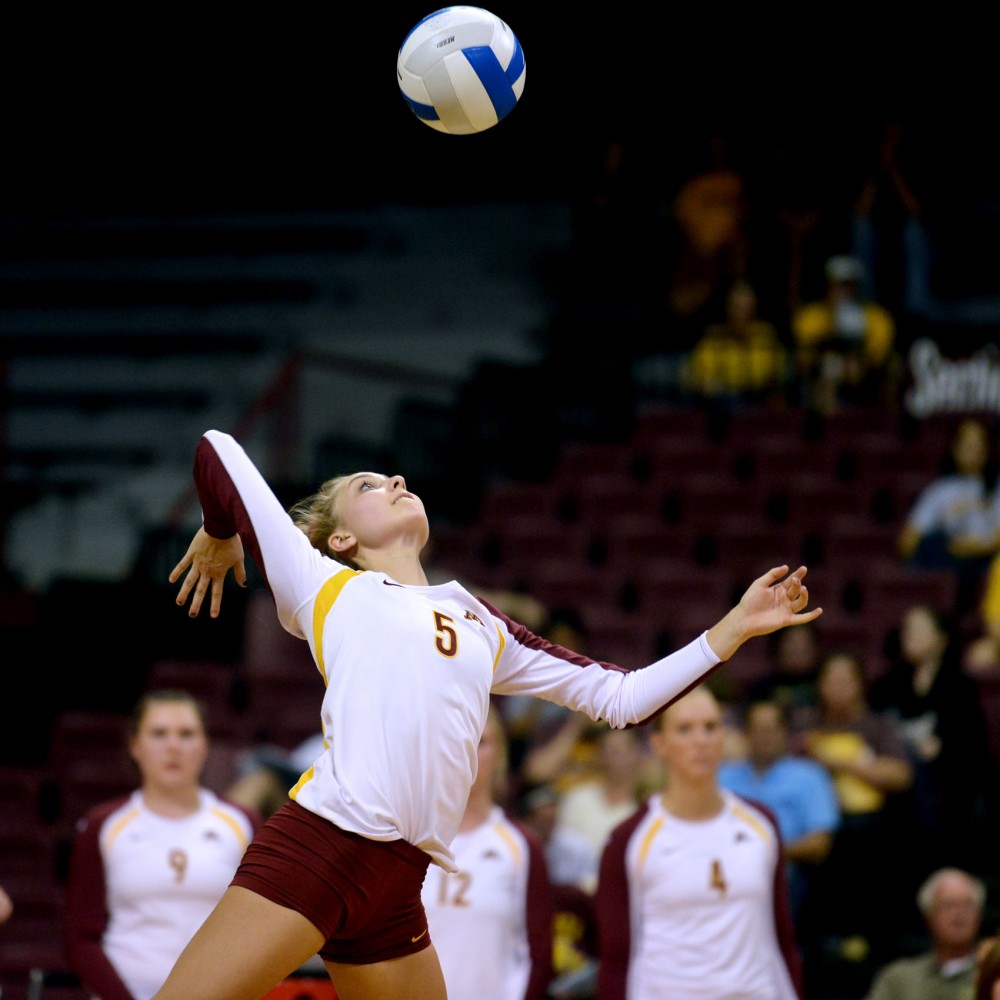 Minnesota libero Kalysta White serves during a match against North Dakota State on Sept. 10 at the Sports Pavilion. White started her volleyball career in eighth grade and is mainly a serving and defensive specialist for the Gophers.

At any given practice for the Gophers volleyball team, two chickens might be racing.

The two teammates earned the nickname from the team’s weightlifting coach because they do all of their exercises in unison.

“Two chickens on a farm,” senior setter Mia Tabberson said. “They just run around, and they chase each other. No one really leads the other, and they just keep on following. It is just this aimless circle.”

As for the racing, if neither of the two meets the team’s drill requirements that day, they have to run sprints. The two make it fun by competing against each other.

“Nearly every day that I have been here they have had a race, and Kalysta has won every one of them,” assistant coach Laura Bush said. “They just keep doing it.”

Lawmaster and White don’t just share a position — they are also the shortest players on the team at 5 feet, 5 inches. They both hail from cities in Southern California less than an hour away from each other. And they are roommates.

In fact, the two knew of each other before they came to the Gophers — even though they had never officially met.

“We knew of each other when we came from California, but we didn’t really know each other,” White said. “I just feel like I’ve known her my entire life.”

Lawmaster started her volleyball career in fourth grade when she joined a club team for which her sister played in middle school. Lawmaster’s mother had told her she needed to wait until she was older, but when the team needed another player, Lawmaster convinced her otherwise.

“I ran around the court in big floppy shoes, and I shanked balls into the wall,” Lawmaster said. “And I made the team.”

Lawmaster didn’t get serious about volleyball until middle school, which was around the same time she took on the defensive specialist position.

“I was an outside hitter in my first two years, but then I got outgrown really quickly,” Lawmaster said.

White had a similar experience. She began playing volleyball in eighth grade and noticed that her short stature wasn’t typical of a volleyball player.

“I always wanted to play a front position because it was so cool to hit the ball straight down,” White said. “But my dad would always tell me, height doesn’t matter. … Now I realize it definitely doesn’t matter, because for my position at least, you want to be small so you can move around and go fast.”

Lawmaster also said she wished she could slam a ball on the 10-foot line, but she knows her position is just as important.

“They couldn’t even hit the ball if we didn’t pass it first,” Lawmaster said. “We are a less glorified position on the court … but no one could play the game without us.”

Both Lawmaster and White played on their high school teams in Los Alamitos, Calif., and Laguna Beach, Calif., respectively. They also competed on club teams that faced international competition.

Bush was a part of recruiting the two to Minnesota and said she noticed many good traits in the upcoming collegiate players.

“As a coach, I think you can see who is a good volleyball player and who has potential,” Bush said. “But what they also brought was a work ethic. They brought a lot of fun personality to the team.”

Bush said they provide a “really fun dynamic between the two of them and for the rest of the team.”

The defenders’ native California is a hub for volleyball, yet the two decided to move to the Midwest for college. They both attributed their decision to new head coach and former U.S. volleyball coach Hugh McCutcheon.

A big question mark surrounded the Gophers’ libero position coming into the fall. Lawmaster and White are the only true liberos listed on Minnesota’s 2012 roster.

“Getting this position is great, but I compete every day,” Lawmaster said. “It’s a day-to-day position. It is a game-to-game position. Every single defensive specialist works really hard in practice, and it’s just a battle every day.”

Bush said Lawmaster exudes the confidence to hold down the Gophers’ backline. Tabberson said she thinks both women contribute to the team.

“Lindsey is very vocal on the court and doesn’t play like a freshman,” Tabberson said. “And Kalysta has a great serve, and she’s able to come in and hit her serve every time and then play a couple defensive points for Katherine [Harms].”

White said she takes the opportunity to learn from Lawmaster, who has played all 38 sets this season.

“If she’s doing something and she keeps doing it right and I can’t get it, I watch her do it,” White said. “It helps me improve my game, and I think that pushes me to want to get better.”

Even with her starting position, Lawmaster said she and White still make freshmen mistakes.

“We still get scolded for some rules here and there,” Lawmaster said.

Tabberson said that she enjoys the entertainment Lawmaster and White provide and that their outspoken personalities fit well with the team. Lawmaster makes funny voices and impressions, and both helped the freshmen create a Minnesota theme song sung in a Borat accent.

Lawmaster said it was easy to be herself when she had a very similar teammate with whom to share the college experience.

“We just clicked,” Lawmaster said. “I’ve always had girlfriends but never like Kalysta. She is one of my best friends.”

“I can’t live without my chicken,” Lawmaster said. “There always has to be two of us.”