Prof. Erin Carlson received a presidential award for her work on antibiotic resistance. 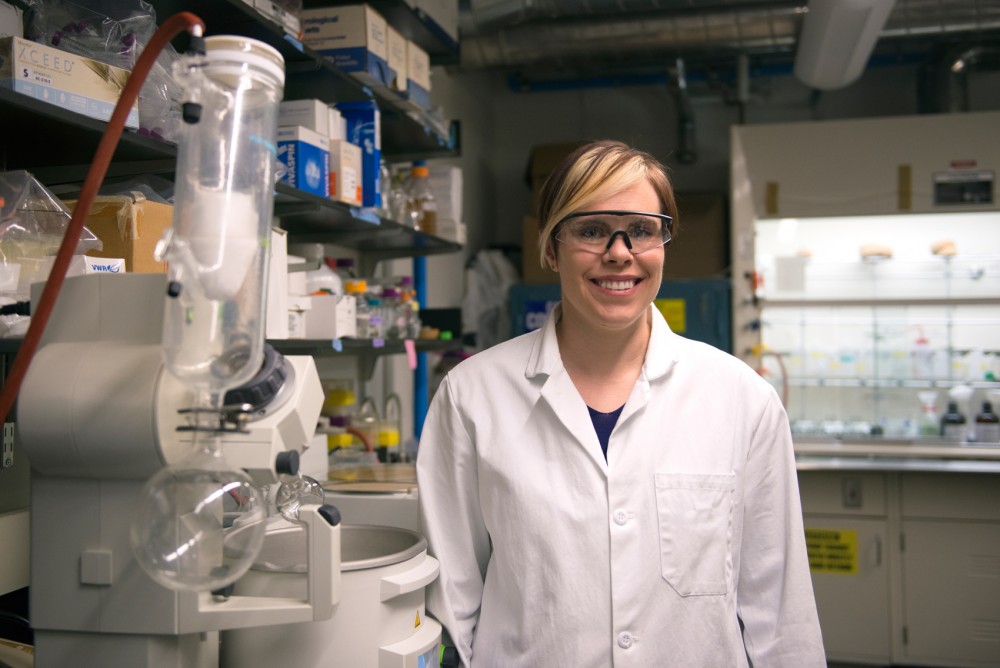 Chemistry professor Dr. Erin Carlson poses for a portrait in her lab on Friday. Carlson was recently awarded the Presidential Early Career Awards for Scientists and Engineers by President Barak Obama.

Annalise Gall
Associate professor Erin Carlson is barely into her thirties and has already received a nod from President Barack Obama for her research — but with a childhood spent roaming laboratories, her thriving early career in chemistry isn’t all that surprising.
Her father, chemist Robert Carlson, encouraged her to explore his lab, even as a child.
“I always tried to take the time to explain to her what I was doing, what I was trying to accomplish and why it was important,” he said.
Erin Carlson currently focuses on how to use natural products derived from microorganisms as antibacterial agents. In February, she was awarded with a Presidential Early Career Award for Scientists and Engineers for her research, which catalogues how old antibiotics work and identifies new antibacterial agents.
Over the course of decades, organisms have adapted to the drugs commonly used to reduce illness and diseases caused by infectious diseases. Antibiotic resistance has now become so alarming the White House has put out a call to action, Carlson said.
“Antibiotic resistance is a huge threat to human health,” she said. “There have been some reports now that postulate that deaths in the United States from antimicrobial resistance will outpace cancer in our lifetime.”
The pertinence and urgency of Carlson’s work draws many students to her lab, including fifth-year chemistry Ph.D. candidate Andy Johnson, who followed her to the University from her previous post at Indiana University.
Carlson’s open-ended approach to research combines chemistry and biology to find creative solutions to problems, he said, which makes her an attractive collaborator.
Last spring, for example, Johnson said Carlson developed an advanced undergraduate laboratory course Foundations of Chemical Biology to fill an interdisciplinary gap in the curriculum.
“She allows us to explore things that are more out-there ideas,” he said.
Nikki Niewold, a chemistry senior, took the course in its inaugural semester. She has since joined Erin Carlson’s research team.
“Other labs that are offered in the chemistry department are a lot more traditional,” Niewold said, “So to be doing something that was much more modern and innovative made us feel like these were all things that we could be doing in a job or in our future careers versus just learning basic techniques.”
Darci Trader, Carlson’s first doctoral student at Indiana University, said the chemistry professor has served as a female mentor.
“That was really important to me — that I was allowed to do any kind of the research, any kind of the teaching, any kind of the outreach that you may have wanted to — and never felt any of the biases you may have being a woman in science,” Trader said.
Despite the serious nature of her research, Carlson said she likes to keep her labs lighthearted as much as she can.
Every time a student accomplishes something notable, such as getting their papers published in an academic journal, Carlson bakes a cake for her lab.
The treats always have a scientific theme, be it a string of cupcakes modeled into a molecule or lion-shaped cake pops complete with butterscotch chip manes.
“So far we have eaten everything but one of them – a sweet potato pie thing that was not great,” Trader said. “But we did eat the marshmallows off the top.”
Even when baking, Carlson draws on her scientific work to ensure success.
“I almost never use a recipe; I just make it up,” she said, “In that way, it is sort of like chemistry.”
Delete Image
Align Left
Align Center
Align Right
Align Left
Align Center
Delete Heading