Coyle on football team: ‘P.J. has come in and has brought a sense of urgency to our program’

Coyle discussed the football program under Fleck, Athletes Village with the Minnesota Daily on Sept. 21. 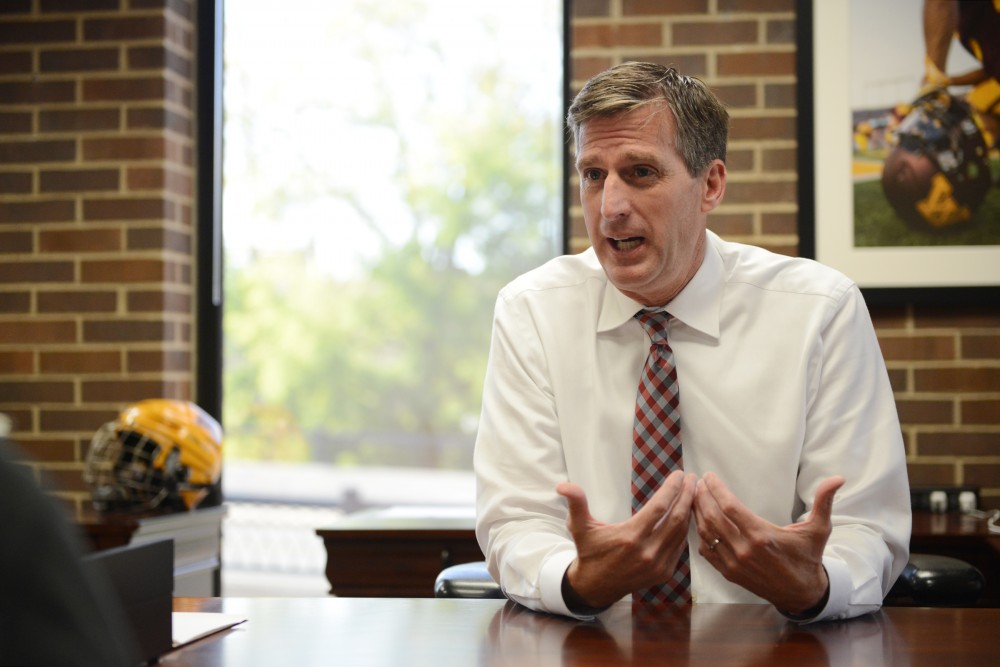 Athletics Director Mark Coyle sits down to talk with the Minnesota Daily to field questions on Friday, Sept. 30, 2016 at Bierman Field Athletic Building.

The Minnesota Daily sat down with Athletics Director Mark Coyle on Sept. 21 for the first question and answer segment of the school year. Topics included the new leadership of the football program, changes within Gopher athletics and what the school should expect from the Athletes Village project.

How was the offseason for you and the athletic department?

I think it was a great off-season, as I finished up my first year it gave us a chance to reflect on everything we’ve done over the past year and how we want to try to move our department forward. It was a great summer. A lot of our student-athletes stick around, so it was great to see them around the building and see them active with the summer school, [and] for training.

Mariucci Arena was renamed to 3M Arena at Mariucci this summer, can you talk a little about how that came to be, and are there any other stadium naming rights deals planned in the near future?

Lou Nanne, a former Gopher-great, in his 60 years, has done so much for this institution. [He] helped us with our partnership with 3M and it was very important to us that we found a partner that recognized the importance of the Mariucci name and what it means to our campus and our hockey program, and our tradition of our program. TCF [Bank]… made a gift to our program. We admitted a sponsorship agreement with them with an $8 million payment to put the TCF Bank print on our field. We are not having any other active conversations at this time with other naming partners, but we’re always looking as we continue to build our program.

You hired P.J. Fleck nearly 10 months ago, now he is off to a 3-0 start, how do you feel about the current state of the football program?

First off, I’m very thankful for our football student-athletes. Those young men have had three coaches in three years and they’ve been through an awful lot and I am so grateful for how they have handled everything. P.J. has come in and has brought a sense of urgency to our program, but again, our football students have responded so positively, and obviously we’re excited about the 3-0 start. I’m equally excited about the academic success of our football program, they went out and had their highest grade point average semester ever at Minnesota, their first semester under P.J.

What do you think the future holds for this program especially in conference play this season, but also in future seasons?

I know they’re excited to open up Big Ten play, and my job as athletic director, not only for football, but for all of our sports, is to make sure we do everything we can to give our coaches and our students the stuff they need to compete at that high level.

What are your thoughts on the culture around the football program, and what have you seen so far as public reception to the culture change?

You also hired another head coach this summer, Catrina Thompson, for women’s tennis, what does she bring to that program?

What I think Catrina’s strongest traits are [that] she is going to bring consistency, and she’s very intentional. She brings, in my opinion, a lot of credibility to our program, because she’s done at a high level, not only as a student-athlete, but as a coach, and giving her her first chance to be a head coach here, our student athletes on that team have responded to her.

The volleyball team is off to a hot start … how do you feel about the state of that program?

Athletes Village is nearing completion, how close is it to being done, and what do you think it will bring specifically to the athletics department?

It’s on time and on budget, which as an athletic director, you love to hear that. I can tell you the project will be done in January of [2018], the great thing about the Athletes Village is that it’s going to impact all 25 programs, [and] all 750 student athletes.

Is there any other major project planned beyond next year once Athletes Village is completed?

Our outdoor track and field. We’re going to be building a new outdoor track that will be completed in fall of [2018]. That will obviously impact our men’s and women’s [track and field] program, and we’re very excited about that, we’re going to break ground later in the fall for that facility, and we’ll get that in place, and it will be good to get that set up with Athletes Village and have us all in one central location.

Right at the beginning of this school year, you renamed the Sports Pavilion after Joel Maturi, one of your predecessors here, how did it feel to go through with that dedication?

I had a chance to work with Joel for a few years when I was here before. What I learned from Joel … was he was a phenomenal connector. He can connect people, and when he became the athletic director when the [men’s and women’s] departments merged, he did such a phenomenal job of being that merger, leading the departments together, and bringing one voice for Minnesota. Every time you see him when you mention Maturi Pavilion, his eyes tear up, that tells you how humbled he is by it and how excited he is.

Editor’s note: This Q&A has been edited for length and clarity.