Around 40 students attended the event, where they learned how to use blocks, strikes, pepper spray and other everyday items — like keys and laptops — for self-defense. 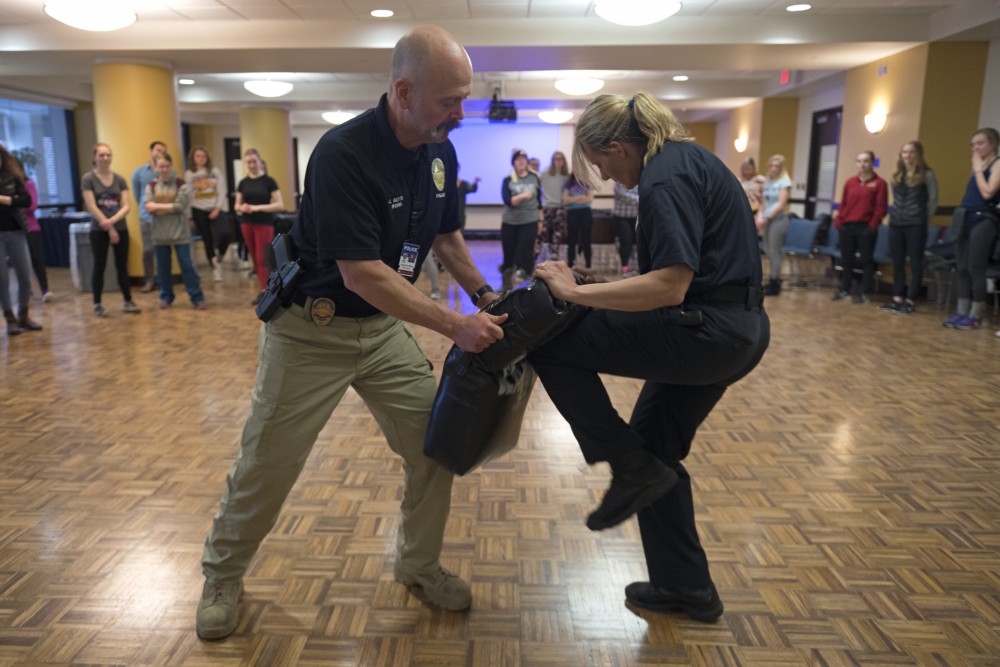 Around 40 students attended the Self Defense Workshop hosted by Student Unions and Activities in Coffman Union. Event coordinators hosted the event after noticing that many students are unsure what to do if their safety is threatened.

The one-and-a-half hour “rundown” of self-defense gave proactive tips to prevent being in a threatening situation. It also taught physical maneuvers to use when situations escalate as well as campus safety resources.

“We really wanted to go … because we thought it would be a cool opportunity to learn some effective [and] good skills,” Doi, a marketing sophomore, said. After the workshop, Doi said she realized she’s often focused on her phone when she is out and about.

“I think I need to be more mindful of my surroundings. I definitely walk around … with my head down sometimes looking at my phone,” she said.

Sedivy said she hopefully won’t have to use the physical maneuvers, but she’s glad she had the opportunity to get a better understanding of safety strategies and available campus resources like 624-WALK.

Event partner University of Minnesota Police Department led an informational presentation and safety skills training at the workshop. UMPD officer Lara Bauer taught physical maneuvers like blocks, strikes and the use of pepper spray or other everyday items — like keys and laptops — for self-defense.

“What we … wanted [students] to get out of this was to have some extra tools to use if they’re caught in a situation where they might have to defend themselves,” she said. Students also practiced moves on pads, which Bauer said “empowers people” because “they know what it’s like to actually hit something.”

Logan Sweeney, campus events chair for SUA, organized the event because she realized through conversations with friends that they didn’t know how to handle threatening situations. Ideally, she wants the University to offer a self-defense session for all incoming freshmen during Welcome Week, she said.

Although the University offers a class for a cost, Sweeney said all students should have the opportunity to learn safety techniques.

Sweeney said she understands why many students, like those who aren’t from the Twin Cities area, might feel uncomfortable around the metro — especially international students.

She said SUA’s marketing data shows the “threat of safety” is something international students least look forward to when they come to campus, which was another motivation to put on the event.

“When you’re coming to a foreign place, you’re first thought is, ‘how can I stay safe?’” Sweeney said.