Gophers advance out of NCAA first round 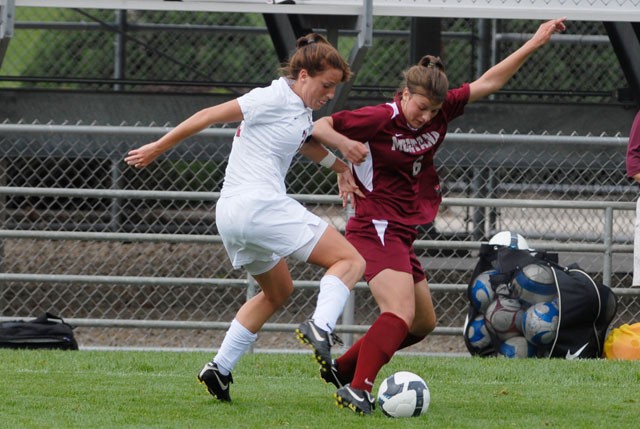 The senior scored the equalizer and game-winner in the second half and the Minnesota womenâÄôs soccer team advanced out of the first round of the NCAA tournament with a 4-2 win over Creighton.

Facing a 2-1 halftime deficit despite a 16-5 shot advantage and plagued by inconveniently placed goalposts, the Gophers needed a quick spark after the break.

âÄúWe felt a bit unlucky not to finish more goals,âÄù head coach Mikki Denney Wright said of the first half. At halftime, âÄúwe really just challenged [our team] to continue to believe and to fight and thatâÄôs exactly what they did.âÄù

Bethke obliged by scoring her fourth and fifth goals of the year in the 54th and 71st minutes. SheâÄôs still well shy of the 11 she scored in 2009, which was tops on the team by a wide margin. But thatâÄôs because BethkeâÄôs role for much of 2010 has been as a creator in the midfield. SheâÄôs adapted well and has a Big Ten-leading 13 assists to show for it, even though itâÄôs also meant a goal total that understates her true finishing prowess.

Lest everyone had forgotten, she decided to show off.

Not quite nine minutes after the break and trailing 2-1, senior Julie Rezac split two defenders near the left sideline and swung a cross into the 6-yard box. Redshirt freshman Steph Brandt deflected it back toward Bethke and, without taking a touch, she hit a left-footed shot to the far post past Bluejays goalkeeper Alicia Montgomery.

After the equalizer, it was all Gophers âÄì and more Bethke. Just as the clock ticked under 20 minutes, she gathered a header from junior midfielder Shari Eckstrom, took a touch toward goal, and fired a hopeful shot from 30 yards out. It fooled Montgomery, who took a step the wrong direction and could do nothing as it knuckled into the side netting.

Like so many games this season, the Gophers hogged the ball and the scoring chances. Their 31 shots were the most it has taken all season, and the 13 on goal were barely shy of the 15 they took against Belmont in a 7-0 win.

But most importantly, the Gophers brought to the postseason the scoring touch they found in their final two regular season games, wins of 2-1 and 3-0 over Northwestern and Indiana.

Even though the crossbar denied at least three golden chances, Minnesota pressured Creighton almost immediately from both kickoffs, and the goals seemed destined to follow. In the ninth minute, senior Molly Rouse tied Eckstrom for the team lead in goals with a low shot from a yard inside inside the box that nicked the far post and went in.

Creighton, however, would not go quietly. First, Lauren Cingoranelli beat Cat Parkhill with a high shot that the sophomore goalkeeper didnâÄôt get enough of a hand on to save. Then in the 40th minute, Andrea Zuniga scored her team-best ninth goal of the season with a stunning shot from just outside the 18-yard line that looped over Parkhill and under the bar.

Brandt scored an insurance goal five minutes after BethkeâÄôs game-winner, on a play that again started with Rezac and ended with a simple redirection off of senior midfiedler Angie OlsonâÄôs low cross.

Minnesota now faces Texas A&M âÄì possibly in the snow âÄì at 1 p.m. on Sunday. The Aggies needed penalty kicks to beat North Dakota State and advance to the second round.