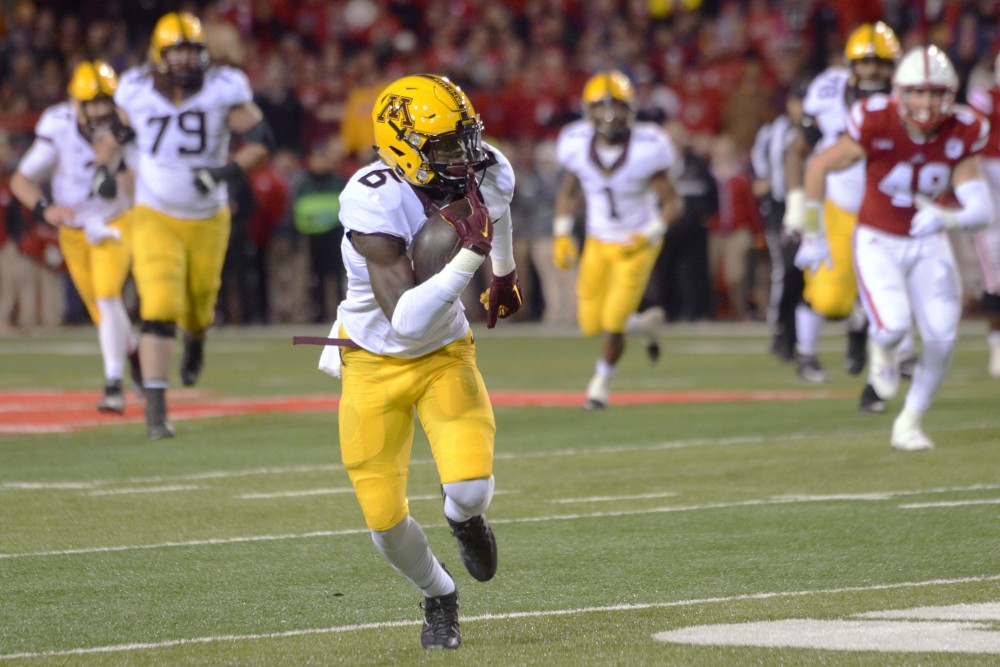 Gophers wide receiver Tyler Johnson runs the ball down the field against the Cornhuskers at Memorial Stadium in Lincoln, Nebraska on Saturday, Nov. 12, 2016.

In its first spring game under head coach P.J. Fleck, Minnesota’s Team Maroon came away with a 42-40 victory in an entertaining matchup at this year’s spring football game.

Five healthy offensive linemen proved to be no problem for Minnesota during Saturday’s game.

“We’ve got some bumps and bruises, and we have a dislocated finger here or there,” Fleck said. “I was really pleased with the way we came out.”

The game had four 15-minute quarters with a non-stop running clock. The kick return team had two players, and quarterbacks could not be tackled. Fans also took punts in the fourth quarter of the game.

Quarterback Demry Croft led two scoring drives to start the first half. Croft threw for 109 yards with no interceptions or touchdown passes in the game.

Quarterback Conor Rhoda struggled on his first drives as the offense went three-and-out twice. He finished 8-12 with 70 yards through the air.

“[We have] a ton of learning to do,” Rhoda said. “Due to the lack of our O-line, we weren’t really able to scrimmage [this spring].”

Running back Rodney Smith started the scoring for the Gophers in the first quarter.

Smith, last year’s leading rusher, went up the middle for a 17-yard rush and the first touchdown of the game.

Running back Jonathan Femi-Cole also scored on a touchdown up the middle. Femi-Cole broke two tackles before he was hit into the end zone for the second rushing score.

Femi-Cole finished with two rushing touchdowns and ran for 75 yards on eight carries, which were both game highs.

Wide receiver Rashad Still caught a 60-yard pass the first time the offense had the ball. Still led the team with 66 receiving yards.

Johnson also attempted a pass on a trick play. The wide receiver got the ball on a reverse and threw it to Croft, but the pass fell incomplete.

“That was my fault,” Croft said. “He told me to keep running, and I didn’t trust him. I kind of slowed down, stopped running.”

The defense forced two turnovers, both on interceptions, in the game.

Cornerback Duke McGhee forced the first turnover of the game. Green threw a ball that tipped off his intended receiver and went to McGhee.

“We have incredible twitch to the ball from the defensive backfield,” Fleck said. “We always have our hands on the ball.”

Linebacker Carter Coughlin led the defense in sacks with two, both times getting to Rhoda.