Gophers soar over Thunderbirds in 3-1 win 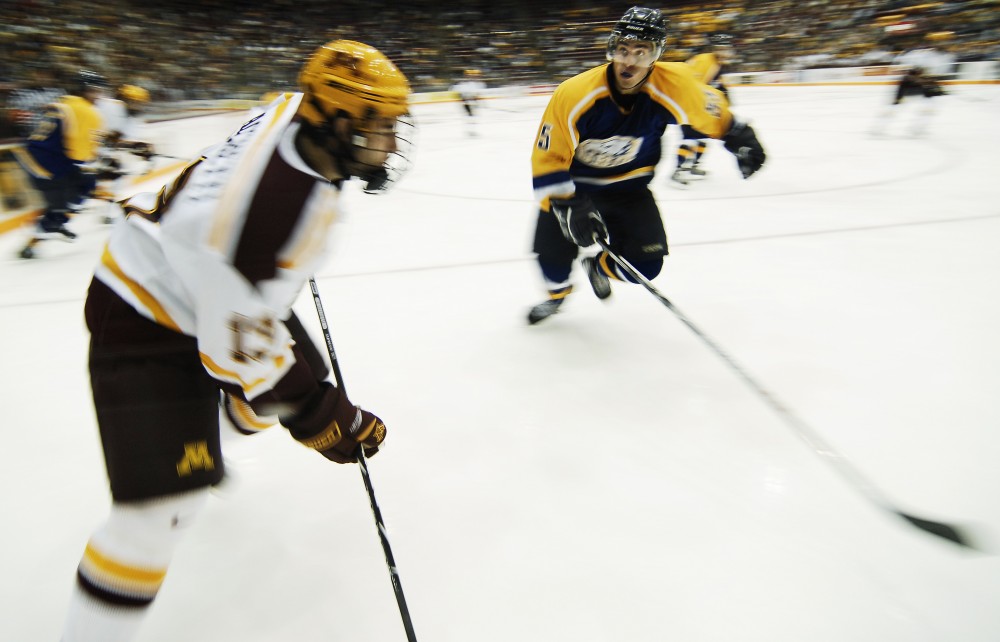 Mike Carman was feeling good Friday night after the Minnesota menâÄôs hockey teamâÄôs 3-1 exhibition win over British Columbia âÄî the junior forward got to see the game from the best seat in the house. The ice. Carman was in uniform for the Gophers season opener for the first time since his freshmen year after sitting out the entire first half of last year due to academic ineligibility. âÄúIâÄôve been talking about it for the last week or two now,âÄù Carman said of FridayâÄôs game against the Thunderbirds. âÄúObviously [in] the first game of the year, you want to get out to a good start.âÄù A good start is exactly what the Apple Valley native had, tallying a pair of assists to help the Gophers slide past British Columbia. Carman and the upperclassmen put an early end to any thought theyâÄôd be outshined by the Gophers freshmen this season. Senior defenseman R.J. Anderson chalked up a goal and earned an assist on another, while junior forward Ryan Flynn and sophomore forward Patrick White each notched a goal of their own. Flynn said although the freshmen didnâÄôt make it onto the score sheet, the 12 fresh faces still added to MinnesotaâÄôs edge over the Thunderbirds. âÄúThey provide a lot of speed for us, a lot of jump, a lot of energy,âÄù Speed and energy were aplenty Friday night, especially early when the Gophers outshot British Columbia 34-11 over the first two periods. The Gophers talent pool is what carried them âÄî the Thunderbirds simply couldnâÄôt keep in stride with a team that has 17 NHL Draft picks despite being the more practiced squad with six games already under their belt. However, FridayâÄôs exhibition contest was also British ColumbiaâÄôs fourth game in eight days and its second-straight against a nationally ranked team. Minnesota appeared to successfully transfer its sound defensive play from last season despite losing both Stu Bickel and Derek Peltier . The blue-liners allowed just 16 total shots; sophomore goalie Alex Kangas stopped all ten of those that he faced in the first 30 minutes of play. In relief, freshman netminder Kent Patterson stopped all but the first attempt he faced âÄî a short-handed blast that beat the keeper high on the glove side. All around, the exhibition gave Gophers coach Don Lucia an opportunity to see his squad in a real game situation; something Lucia definitely needed as his new bench was nearly half full of new players. After the game, Lucia was pleased with what he saw. âÄúIt was a good exhibition for us,âÄù the tenth-year coach said. âÄúI thought we did a lot of good things.âÄù Lucia knows next weekendâÄôs Western Collegiate Hockey Association opener with St. Cloud State likely wonâÄôt be as easy as FridayâÄôs matchup. âÄúNext weekend, the speed limit goes up.âÄù