The Minnesota Daily • May 2, 2011 • https://mndaily.com/217178/uncategorized/historically-black-sorority-returns-u/

Historically black sorority returns to U

When six students joined Zeta Phi Beta in April, they welcomed the sorority back to campus. 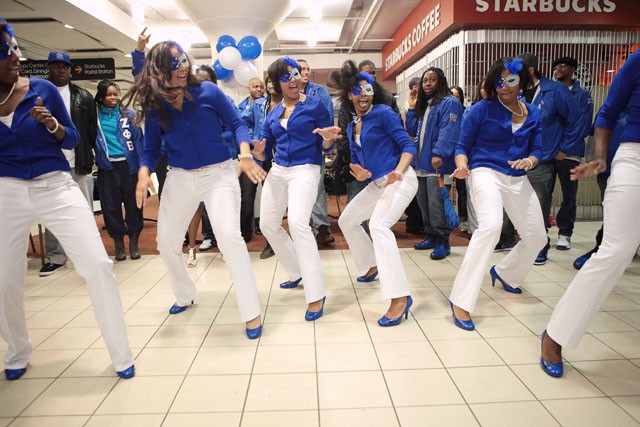 For Ma Eyongerie Frambo, the path to becoming a member of Zeta Phi Beta Sorority Inc. began in her sixth grade homeroom class.
She said her teacher, a Zeta, taught her more than what could be found in her middle school textbooks.
âÄúAt that time of trying to find yourself and figure out where you fit in,âÄù Frambo said, âÄúShe challenged me to think of carrying myself as a woman.âÄù
Frambo joined six other masked women who stomped into The Cube at Coffman Union on Friday, April 22 in a way that has not been witnessed on the University of Minnesota campus in nearly 10 years.
The women became the only undergraduate members of a historically black sorority at the University when they were officially welcomed into Zeta Phi Beta during their probate, or official âÄúcoming outâÄù ceremony, last week.
âÄúIt feels good to be the first to make this move,âÄù said Leila Shuler, who was the first in line to be unmasked at the ceremony. âÄúBut itâÄôs a lot of work and a lot of responsibility.âÄù
At the probate, women used song, dance, traditional stepping, poetry and spoken word to announce their new status as Zeta women with the encouragement of a crowd of family, friends and fellow multicultural greeks.
Five of the new members are University students, and one is enrolled at Augsburg College. For two of the women, who will graduate in a few weeks, the opportunity came just in time.
Zeta Phi Beta is a member of the Divine Nine historically black greek letter organizations founded between 1906 and 1963.
Though there has been a consistent presence of historically black male fraternities on campus, the black sorority presence has been absent from campus for a decade.
The new line of women said they wanted to take the opportunity to be part of a historic moment.
âÄúWeâÄôre part of history now,âÄù Kristian King said. âÄúWeâÄôre filling a void on campus.âÄù
Zeta Phi Beta members must go through a lengthy membership intake process, which determines how well the women will carry on the legacy of the group, according to Joycelyn Oppong, president of the local graduate chapter of the group.
For the six new members, the process began last semester with two informational sessions that attracted 30 women each.
The opportunity to join a historically black sorority has been much awaited.
Tahirah Whitelaw was part of an auxiliary sorority branch at her Milwaukee high school, while Shuler first learned about sorority life from her older sister.
âÄúWithout [black sororities on campus,] a part of our culture was missing,âÄù Whitelaw said.
The women say that the biggest part of the process was determining if the group was the âÄúright fit.âÄù
Oppong said she hopes this culture will grow in Minnesota to match that of her own undergraduate experience in New Jersey.
The St. MaryâÄôs University of Minnesota graduate students said black greek unity and love was a big part of her satisfaction with her undergraduate campus life.
Over the past week, the women said they have begun to feel the sense of community Oppong has tried to relate to them.
They made their first group appearance April 23 at the Midwest Step Show and attended a regional Zeta Phi Beta conference Saturday.
The women said other historically black sororities plan to revive their undergraduate chapters in the coming year.
The new Zeta Phi Beta members already have big plans for the fall semester.
âÄúThis hasnâÄôt been easy,âÄù Shuler said. âÄúIt probably never will be easy. But we canâÄôt rest. WeâÄôre ready to do this right.âÄù