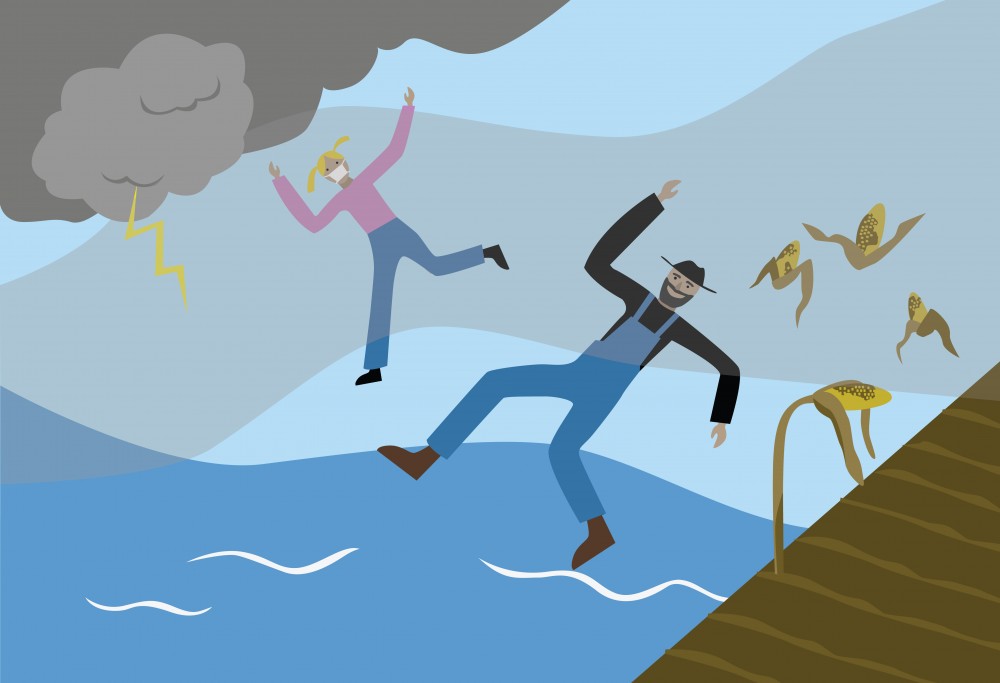 A climate report recently released by the federal government emphasizes the substantial damages to the economy, environment and human health happening because of climate change, including the effects on the Midwest.

The final installment of the Fourth National Climate Assessment was released late last month and evaluates the human welfare, societal and environmental elements of climate change. The report also describes the changes happening in specific regions of the U.S., including the Midwest. The largest impacts for states such as Minnesota will be in the agricultural sector, but ripples will also be felt in the forestry, infrastructure and human health areas.

Because of the temperature increases, productivity is expected to decline in crops like wheat, soybeans and corn.

“If we don’t do anything to adapt, the agricultural productivity will decline to what it was in the 1980s,” said Katherine Browne, a postdoctoral student at the University of Michigan and a contributor to the report. “All the progress that we’ve made in the past 30 or 40 years, in terms of making crops more productive, will be lost if we fail to adapt.”

The temperature increases are expected to be the largest contributing factor to declines in the productivity of agriculture, the report says.

“One of the ways we’re impacting the environment through agriculture is … by using up some resources,” said James Gerber, the co-director of the Global Landscapes Initiative at the Institute on the Environment at the University of Minnesota.

Humans are affecting the environment and now climate change is exacerbating those issues, he said. “It’s almost a double-edged sword.”

In addition to temperatures, precipitation is increasing as well, which can erode soils, create favorable conditions for pests and pathogens and degrade the quality of stored grain.

“Soil doesn’t absorb as much during these high rainfall events as it used to,” said Madeline Magee, who worked on the report as a doctoral researcher at the University of Wisconsin-Madison.

In urban areas, much of the infrastructure related to stormwater management is unsuitable or old, and unable to deal with that volume of water, according to Magee. This results in floods, which can cause property damage in urban areas.

“But flooding events that occur in rural areas, especially those dominated by farmland, can also cause issues because you can have lots of crop loss,” she said.

With the increased flooding and severe storms, the report estimates it will cost the Midwest over $500 million per year by 2050 to adapt infrastructure. This puts another expense on top of the already deteriorating infrastructure in the Midwest, Browne said.

“You put the stressor of climate change on top of that and it becomes really expensive,” she added.

The effects of climate change are already happening, but the intensity and severity of the impacts will differ depending on how the U.S. responds, according to the report.

“This isn’t an issue that is going to wait 50 years to be a problem, it’s a problem now,” said Magee. “And we’re seeing consequences, so we need to do something about it now.”

The continued warming is projected to cause substantial damages to the economy, and the potential for losses could reach hundreds of billions of dollars per year by the end of the century, according to the report.

The effects happening in the natural world are more troubling. Droughts will intensify and downpours will get heavier. Air quality will decline and extreme weather will threaten people’s health. Climate change is also connected to the spread of invasive species, which significantly contributes to biodiversity loss and economic costs.

The report details dozens of more ongoing issues that are projected to intensify, spreading from Hawaii to Alaska. However, it also highlights how the U.S. is currently attempting to mitigate climate change and what needs to be done to reduce the risks and harms that come with it.

Since 2014, a growing number of states, cities and businesses have developed plans for reducing greenhouse gas emissions, the report says.But without significant reductions in emissions, there will be significant and far-reaching changes over the course of the 21st century, according to the assessment.