Minnesota defeated Arkansas before losing to No. 13 Florida State and USF. 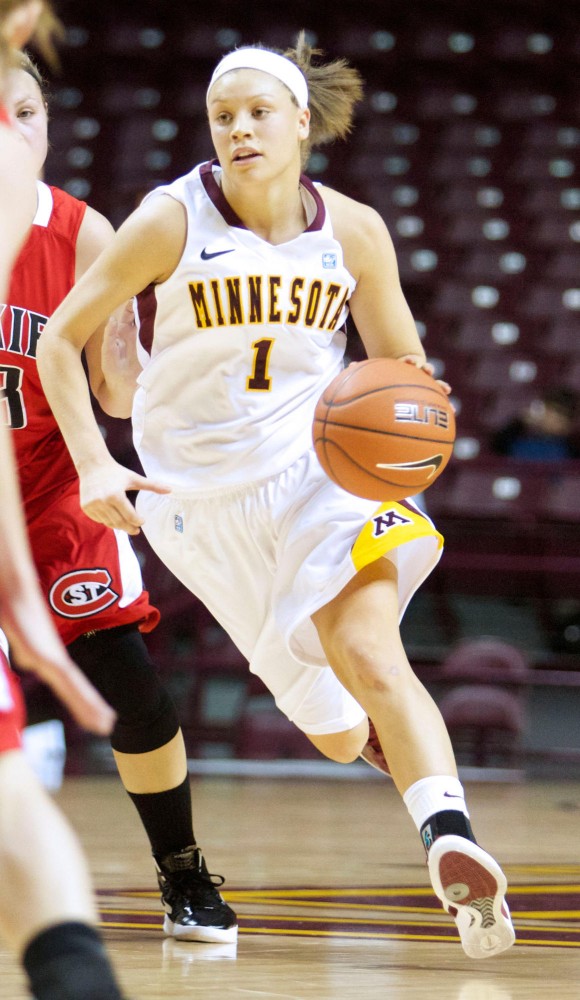 The Gophers womenâÄôs basketball team won its regular season opener, but finished with a 1-2 record at the WomenâÄôs Basketball Invitational Tipoff on Nov. 11-13 in Daytona Beach, Fla.

Minnesota defeated Arkansas on Friday and then lost to No. 13 Florida State on Saturday and South Florida on Sunday.

âÄúWeâÄôre going to get better from this,âÄù assistant coach Curtis Loyd told ESPN1500 radio Sunday. âÄúWe got to give our younger kids some experience on the floor.âÄù

Minnesota fought admirably against a tough Florida State team Saturday, but ran out of steam in the second half and fell to the Seminoles 68-56.

Rachel Banham had 10 points in the loss, but shot just 4-for-16 and had six turnovers. The freshman point guard made her only 3-point shot to cut Florida StateâÄôs lead to 51-50 with 6:39 left, but the Seminoles went on a 12-0 run thereafter.

Alexa Deluzio led Florida State with 17 points, including two three-point shots following BanhamâÄôs triple to give the Seminoles a 57-50 lead.

âÄúWe have big goals, so, although we have a lot of work to do, I thought our team put up a great fight today,âÄù Gophers head coach Pam Borton said in a release after SaturdayâÄôs loss.

On Sunday, the Gophers looked as though they were running on tired legs as Southern Florida defeated them 60-52.

The Gophers shot just 27 percent from the field and had 17 points at the half. They ended the game on a 13-2 run to make it competitive.

Buford again led the Gophers with 16 points, but also had four turnovers.

Banham missed her first eight shots and didnâÄôt score until one minute remained in the first half. She finished the game with six points on 2-for-15 shooting.

Banham led the team to a 68-60 victory in its opener against Arkansas, scoring 15 points on 6-for-14 shooting. She had just two turnovers and four assists.

Minnesota committed 18 turnovers as a team, but Arkansas had 24. Gophers forward Kionna Kellogg had six steals, and Banham and junior guard Leah Cotton each added two.

The Gophers took a 29-23 lead into the intermission and trailed only briefly in the second half. Down 44-42, they went on a 15-2 run to take an 11-point lead that they would not relinquish.

Buford added 13 points and six rebounds, and Loberg had 12 points and a team-high seven rebounds.

Buford showed her leadership by filling up the stat sheet in each game. She finished the weekend with a team-high 42 points, 15 rebounds, 10 assists, three steals, and four blocks.

Banham, on the other hand, showed inconsistency as a freshman still learning the ropes. She had 31 points on the weekend, but shot just 6-for-31 in the GophersâÄô two losses.

Minnesota will try to rebound from back-to-back losses when it returns to Williams Arena for the Subway Classic tournament on Nov. 19-20.