Ethan Lizak primed for another NCAA run at a different position

Lizak is 11-3 and ranked eighth in the nation since shifting weight classes this year. 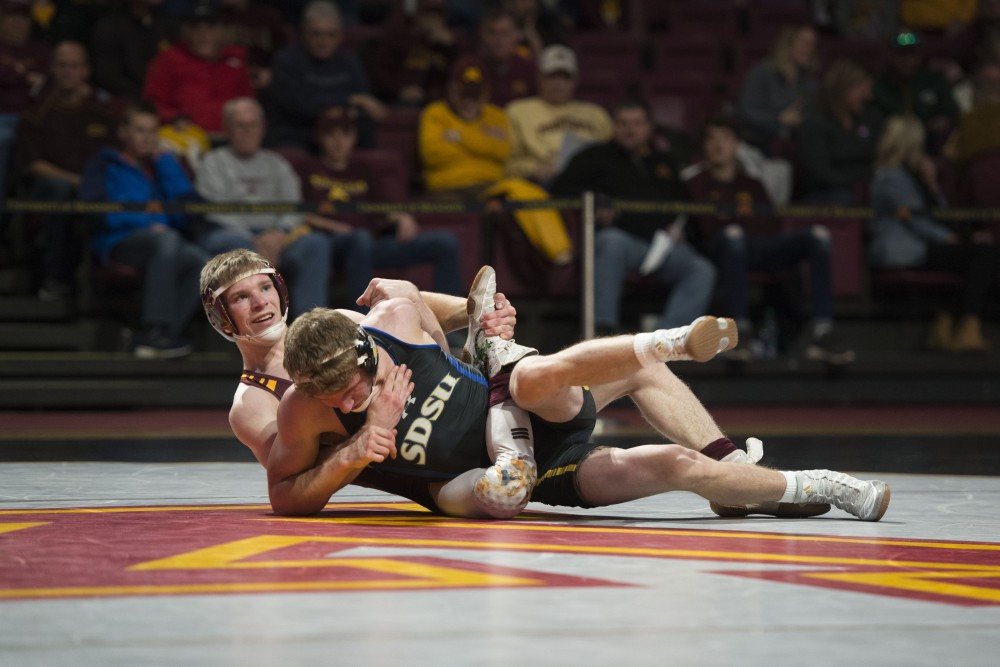 Redshirt senior Ethan Lizak at 133 competes during the match against South Dakota State on Sunday, Nov. 25 at Maturi Pavilion.

There isn’t much Ethan Lizak hasn’t achieved in his first four years as a Gophers wrestler. The redshirt senior is a two-time All-American and a three-time NCAA qualified — earning a fourth place finish in 2018 and finished second in 2017.

However, this year presents a new challenge as he shifts from the 125 weight class to the 133 weight class. He’s wrestled in the 125 class for his first four years. The change comes after head coach Brandon Eggum noticed a dip in Lizak’s energy level.

“He was a big 125 and that was difficult [to make weight],” Eggum said. “It was better from that standpoint, allowing him to go up, and he focused more on wrestling and not making weight. … We believe he could handle the weight well, and he’s proved that.”

Lizak’s shift was part of a larger decision that saw multiple people move up weight classes to make it easier on the wrestlers to make weight.

The decision came as relief to Lizak, who had struggled to make weight, which was affecting his overall performance.

“I have a lot more energy going into matches,” Lizak said. “Last year, going into the 3rd period, I’d be dying a little bit — holding on trying to get the win. But this year, I think I have juice to wrestle in the 3rd period and do good.”

Since making the move before the season, Lizak is 11-3 this year and is ranked as the No. 8 133-pounder in the nation.

“I think [the shift] was pretty easy, obviously making weight at the first open, you could see the difference. He had a big smile on his face versus the painful look that was on his face last year, so that was great,” Eggum said.

Lizak finished fourth at the Cliff Keen Invitational last week, and believes he still has room to improve.

“I think through the losses I’ve had, I’ve learned a lot [from],” said Lizak. “That’s kind of what happened in all four years of my career so far. I’ve taken some decent losses at the beginning of the year, and then I learn from them. … By the end, I’m wrestling at my best and usually do really good at NCAAs.”

The senior is a key component of the Gophers locker room, providing advice to the younger guys around him.

“He understands wrestling. His wrestling IQ is very high, so you see him spending a lot of time helping and teaching wrestlers — especially if he sees things that they can do that are similar to him,” said Eggum. “The success he has on the mat is contagious … it helps build the confidence of the other guys on the squad.”

Lizak remains focused on his ultimate goal, winning an NCAA title. If he achieves, it he would become the 18th Gophers’ wrestler to win an NCAA title.

“Being the last year, it’s exciting. Every year I make it to the postseason but I kinda of treat it differently because this is it, this is the last tournament,” said Lizak. “This is all I got, so I put everything into it.”

Lizak ranks 47th in Gopher history with 98 wins, and has a chance to surpass head coach Eggum with 115 wins before the end of the season.