A handful of journalism students and professors gathered to watch the debate and discuss the impacts of media during an election. 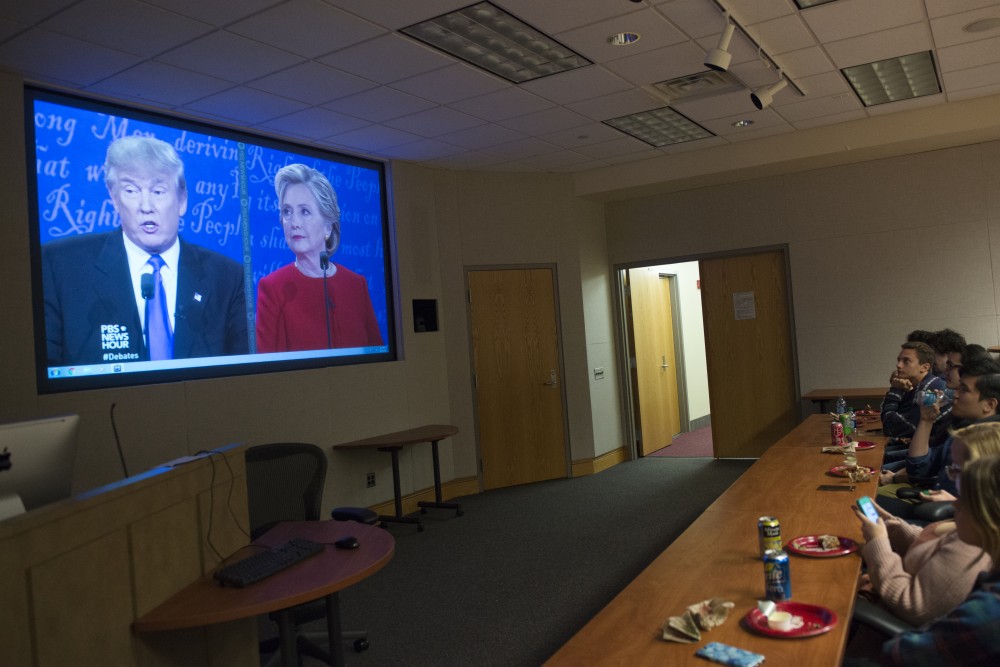 A group of journalism students watch the first presidential debate in Murphy Hall on Sept. 26, 2016. The students gathered to watch and discuss the debates while enjoying pizza and beverages.

As Donald Trump praised the efficacy of stop-and-frisk methods in the U.S., a student at the University of Minnesota couldn’t help but speak up.

Robb was watching Monday’s debate on a projector screen in the University of Minnesota’s Murphy Hall with a handful of journalism students and professors, including professor Chris Terry, who organized the viewing.

Hesaid he wanted to cut out the “mainstream view” and focus on a learning experience for journalism students.

“To me, I don’t think the journalists are doing a very good job of covering the election … its become sort of a popularity contest,” he said.

Monday’s debate was the first time Hillary Clinton and Donald Trump duked it out on the same stage which some news organizations reported could help decide the election.

Terry was joined by professor Chris Ison, who said there have been instances of poor journalism this election season.

“If potential voters really care, they can go out and find really good journalism with all these key issues,” he said. “Being informed means you can’t just be a passive news consumer.”

To Nash Meeker, a journalism junior, the debate was a turning point in his voting decision because he was unsure who to support after Bernie Sanders left the race.

“It was still really reassuring some of the issues got raised and resolved to some extent,” he said.

Nash said after the debate he was swayed to vote for Hillary Clinton in November.

The viewing party was put together last minute by Terry, who said he came up with the idea last Friday.

“It seemed like a great opportunity to share in a collective experience,” he said. “We’re journalism people. These are things we should talk about.”

After the debate was over, Terry and Ison led some group discussion about the debate.

Terry felt it was cut-and-dry that Clinton had won the debate and questioned Trump’s coaching.

Toward the end of the night, Ison asked if anyone felt they learned anything about the candidates’ positions during the debate.

No one raised their hand.