Caroline Ryba sets a high standard on the court, in the classroom for Gophers tennis

The junior came out high school with a 4.25 GPA and five academic awards. 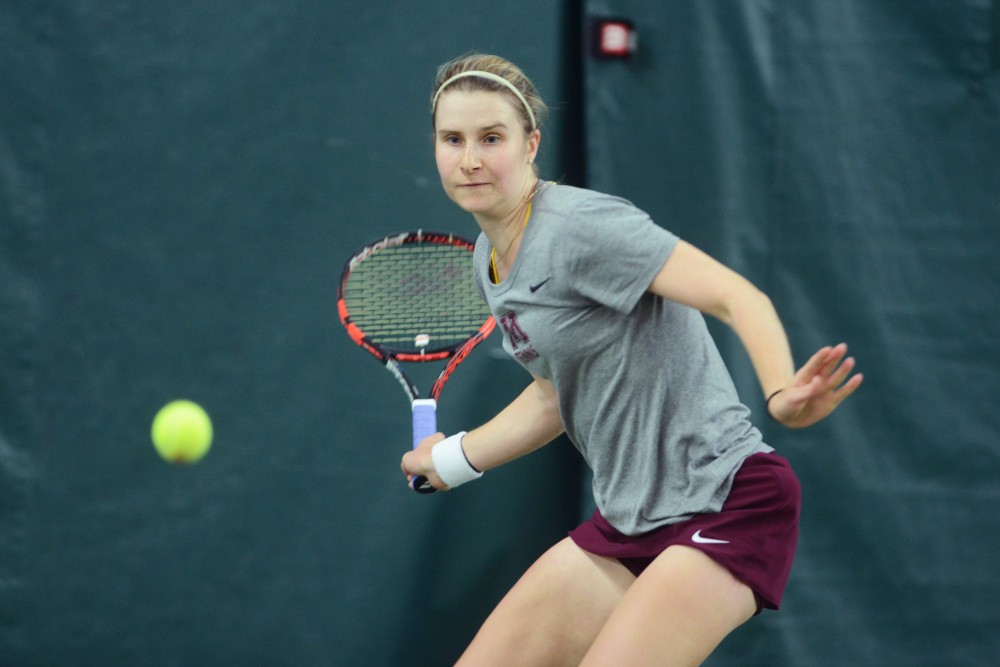 Junior Caroline Ryba returns the ball during a match against Ohio State on Friday, April 14, 2017.

Junior Caroline Ryba has demonstrated her high-scoring abilities on the tennis court and in the classroom.

Ryba, achemical engineering major, maintains one of the highest grade point averages on the entire tennis and dominates the No. 1 spot on the court.

“There have been tough times,” Ryba said. “But it’s all worth it, and it’s all really rewarding in the end. I don’t think I’m going to regret working hard and taking a difficult major.”

The reality of being a Division I athlete and a successful student may prove a challenge, but it has been no match for Ryba, who traces her interest in science back to high school.

Ryba said that she was always more attuned to the math and science realm of school and was good at problem-solving in those areas.

“You tend to like the things that you’re good at.” Ryba said.

Ryba has been able to strike a balance between school and sport, and the work ethic is not lost on her teammates.

“Off the court, everyone knows she’s always studying,” said junior Mehvish Safdar, who was Ryba’s doubles partner their freshman season. “I’ve lived with her for the past two years. [She’s] always getting to sleep at the right time … It’s those little things that can catch up to you, and she doesn’t let them catch up to her.”

On the court, Ryba’s path to tennis comes through her family, specifically her brother, Konrad.

“My older brother played before me,” Ryba said. “He still loves the game, and he still plays, and we will practice, he is definitely someone I look up to, and he just understands the game … he takes everything a little more lightly than I do.”

The native of Glenview, Illinois said she was also a gymnast when she was younger before she transitioned to tennis, and her brother served as an inspiration to that.

Ryba said her parents were very supportive of her, and they helped through the rigors of traveling to matches in juniors.

Still, Ryba’s success on the court is well-established: from being the most valuable player at Glenbrook South High School for three consecutive years, to solidifying the No. 1 in the Gophers’ playbook in her junior season and winning records in both her career singles and doubles competition.

Safdar said Ryba is a good role model for the younger players, who comprise most of the team. Safdar said she never misbehaves, is always a fair player and embodies drive and a solid notion of what she wants to do in life.

“All around, Caroline is a very put-together person,” Safdar said. “On the court, honestly, it’s really admirable how focused she is, and she’s always focused on the task at hand, and she’s always someone who is very composed.”

Ryba likes to stay focused and busy, so it is no wonder why she has the success she does in two challenging areas of life.

“I always go into practice with a purpose,” Ryba said. “Focus on my goals, and what I kind of want to work on, or what I think I need to improve on.”