Rodney Williams did not play with a sore left shoulder as the Gophers lost to Illinois. 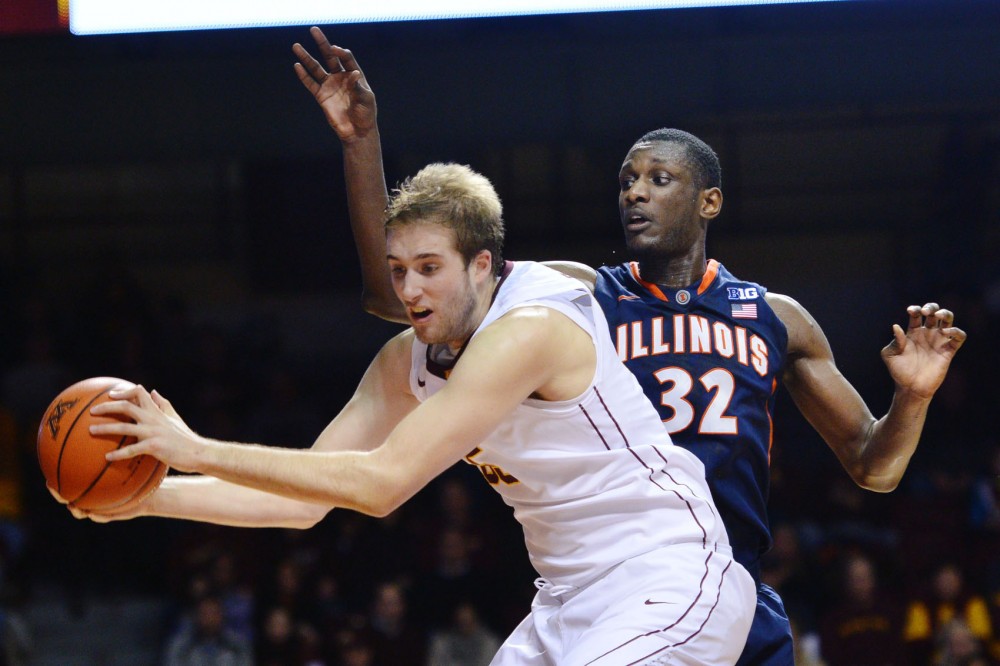 Coach Tubby Smith shook his head at the podium Sunday after the Gophers’ 57-53 home loss to Illinois, looking for answers to explain his team’s struggles.

No. 18 Minnesota lost its sixth game of its past eight in front of an announced sellout crowd of 14,625 at Williams Arena.

Junior Austin Hollins led the Gophers with 16 points, four steals and no turnovers, but it wasn’t enough to overcome the mistakes and the absence of senior Rodney Williams.

Williams, the Gophers’ co-captain, missed his first game since March 12, 2010, with a sore left shoulder.

“It felt a little strange,” Williams said about not playing. “But we have a lot of guys that can step up.”

“It’s a long season,” senior Trevor Mbakwe said. “But it’s a hard loss for us. We know we’re right there — we just have to stop hurting ourselves, and we’ll be fine.”

Williams said he hurt his shoulder in a collision at the end of Saturday’s practice, but he insisted he will play Thursday against Wisconsin.

“It definitely hurts not having Rodney,” Mbakwe said. “But it’s not an excuse. We still felt we were a good enough team to beat them.”

Mbakwe drew double teams all night from the Illini, as the Gophers made it a priority to go to their sixth-year senior.

But with 50 seconds left and Minnesota down one point, Mbakwe was doubled and threw the ball out of bounds, intended for Joe Coleman.

“It was a bad pass, I guess,” Mbakwe said. “Couple bad mistakes down the stretch, and that’s the game.”

Mbakwe finished with 13 points and 10 rebounds, his eighth double-double of the season.

Fresh off an emotional victory over No. 1 Indiana on Thursday, the Illini didn’t hit a field goal in the first nine minutes of the game.

But that didn’t stop the Big Ten’s most frequent three-point shooting team from staging a comeback.

The Gophers sprung out to a 26-14 lead, but they failed to hit a field goal in the last five-and-a-half minutes of the first half.

Minnesota was outscored 43-27 the rest of the game.

“The main thing was getting out on the threes,” Hollins said. “They hit a ton of threes, and that’s what they do.”

The Illini shot 48 percent from deep, including the game-sealing shot from Tracy Abrams with 18 seconds remaining.

Minnesota has struggled to defend the perimeter and handle the basketball throughout this season.

Illinois is the third team in the Gophers’ last four games to shoot nearly 50 percent from beyond the arc. Michigan State hit 50 percent last Wednesday and Nebraska went 64 percent from deep Jan. 29.

“It’s the same issues as we’ve had before,” Smith said. “Taking care of the basketball. It’s something that’s still happening, and it’s a real concern.”

The Gophers forced four Illini turnovers in the first seven minutes, but Illinois had three in the last 33 minutes.

—Elliott Eliason made his first start of the Big Ten season in place of Williams. He had four points, 10 rebounds and two blocks in 28 minutes.

—Andre Hollins and Coleman struggled all night, combining to shoot 3-for-18 from the field.