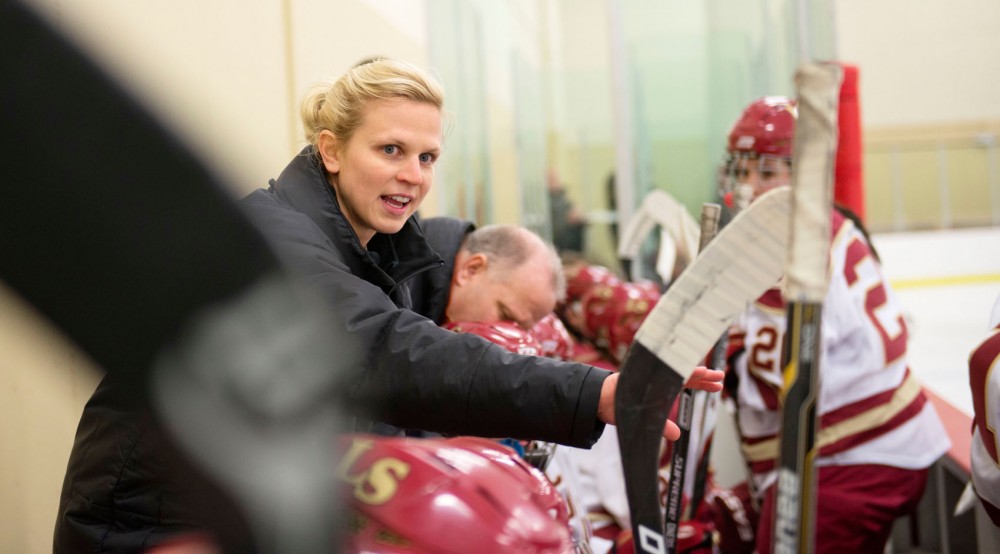 When the 2014 Winter Olympics roll around, Natalie Darwitz will be a spectator.

Though the three-time Olympian and former Gophers women’s hockey star is enjoying the next chapter in her life, she said it will hit her hard when the games begin in Sochi, Russia.

“I miss the competition. I miss the big games,” said Darwitz, 29.

But in her second year as head coach of the girls’ hockey team at Lakeville South High School, Darwitz is less stressed, more laid back and more carefree.

She has a dog, she has time for her family and friends and she doesn’t have to turn people away because of hockey.

“I think those intangible things in life are the things I appreciate the most now,” she said.

Her mom was hesitant at first and tried to deter Darwitz by putting her in a tap dancing class.

“She knew my passion, what made me excited,” Darwitz said.

Her father, Scott Darwitz, who coached at Eagan High School for 15 years, said he knew she was elite right away.

That’s not to say she didn’t work at it.

“She would call me up at work and say, ‘Dad, I shot a thousand pucks out in the driveway,’” Scott Darwitz said. “And it would be 90 degrees in the middle of July.”

Darwitz played four years of high school hockey, but they were anything but typical.

She racked up 487 points in 102 games from her seventh-grade to sophomore seasons.

Scott Darwitz said his daughter didn’t have enough good players to play with while in high school. He also said she took a beating from opposing teams.

“Coaches from the other bench would literally tell their players to check her or hit her,” Scott Darwitz said. “The more teams were all over her, the more hungry [she was].”

At age 15, she was the youngest player to ever be named to the U.S. national team.

Letting his daughter go at such a young age was tough for Scott Darwitz.

He remembers the day she left for Lake Placid, N.Y.

“It broke my heart, but if she wanted to pursue her dreams, she had to skate at the elite level,” he said.

Darwitz spent most of her junior and senior years of high school outside of the classroom.

“My first two trimesters [each year], I wasn’t a high schooler,” she said. “I was training and waking up to play hockey every day, which was pretty neat.”

She missed out on certain social aspects while she was training, but she said she probably wouldn’t trade her Olympic experience for sitting in class all day.

Darwitz competed in her first Olympic Games as a senior in 2002.

She tallied a hat trick in her first game and had a team-high seven goals. Despite her efforts, the U.S. lost to Canada 3-2 in the gold-medal game.

She still thinks about the loss when she lies in bed at night and can’t fall asleep.

“We were 9-0 against Canada that year, and we picked the wrong time to lose,” she said.

Darwitz said 2002 was her best Olympic experience, though, because it was her first time, it was in the U.S. and many of her friends and family members attended.

Eagan had a pep fest for her when she returned, but after a week, she was back to being “regular old Natalie.”

The adjustment back to high school was a hard one. In one of her first couple of days, she tried to leave class to go to the bathroom. Her teacher told her she had to raise her hand to ask for permission and get a pass.

Darwitz estimated that four or five colleges looked at her. She told them to leave her alone so she could focus on the Olympics.

“My goal, my dream, my aspirations were to play in the Olympics and win a gold medal,” Darwitz said. “That was the present moment, and I wanted to be in the present.”

But ultimately, she couldn’t pass up a chance to play for her hometown team.

Playing at Minnesota offered Darwitz, a self-described homebody, a break after living out of a suitcase during the Olympic year.

Hockey was the primary factor in her decision, not school.

“As a Minnesotan, as a hockey player, you’re kind of born to be a Gopher, and that was hard to turn down,” she said. “I went to college to play hockey and get an education. I’m not going to lie … and say it was the other way around.”

Her teammate from the Olympic team, Krissy Pohl (perhaps better known by her maiden name, Wendell), had already committed to Minnesota. Darwitz said she knew other players on the roster from her national team experience.

“They [knew] where each other [was] going to be, and they kind of fed off of each other’s play,” Frost said.

The names “Darwitz” and “Wendell” are often intertwined in women’s hockey history because the two shared so many experiences. They played together in two Olympics and won two collegiate national championships.

The duo sit atop Minnesota’s scoring charts although each played only three seasons for the Gophers. Darwitz ranks first with 246 points; Pohl is second with 237 points.

“I think somebody referenced us one time as salt and pepper,” Pohl said. “We mesh well together, but we’re so very different.”

Frost described Pohl as a natural goal scorer and a powerful skater. Off the ice, she was more outgoing and vocal.

Frost said Darwitz was quick on the ice and had excellent vision. She was more reserved off the ice.

“She was more of a pass-first, score-second [player],” Frost said. “I think she loved a good assist versus a good goal.”

Darwitz recorded 68 points in her freshman season. She jumped from 64 points to 114 from her sophomore to junior season, setting an NCAA single-season points record in the process.

Darwitz was a three-time All-American and three-time finalist for the Patty Kazmaier Award, the honor given to the nation’s best player.

But her most significant hockey experiences came during her sophomore and junior seasons in 2004 and 2005, when she helped lead the Gophers to back-to-back national championships.

She said those were her two best hockey experiences — even better than her three Olympic medals.

“When you get to a very high level where you’re elite … you train to win. You train to be the best,” Darwitz said. “Those two teams we had were special.”

Frost said Darwitz was “one of the best, if not the best” he’s ever coached.

While Darwitz was training for the 2006 Olympics, she reached a crossroad. She said she wanted to prepare for the Olympics and then take a break.

But the Olympics didn’t turn out as planned. The U.S. won the bronze medal, which Darwitz said was a disappointment.

Looking back, she said she thought Canada had a better team, but the U.S. should have made the gold-medal game.

“That’s the one I [would] want to redo because a lot of things went a little haywire that year for our team,” she said.

Darwitz decided not to return for her senior season for the Gophers women’s hockey team after the Olympics. Instead, she returned as a student.

She didn’t like living out of a suitcase and wanted to step back and be a “normal, everyday student at the U,” she said.

“After the ’06 Olympics, I didn’t know if I wanted to play hockey anymore,” she said. “I was just kind of burned and mentally drained.”

Darwitz said she didn’t skate for about eight months after the Olympics ended. She said taking time off was a blessing in disguise.

“Do I have regrets about … not playing my senior season? Yeah,” she said. “But at the same time, it gave me the perspective that I loved hockey, and I wanted to go back and give it a shot.”

Between the 2006 and 2010 Olympics, Scott Darwitz convinced his daughter to join him on the bench at Eagan.

She was hesitant at first.

“I said, ‘I’m not coaching. I would hate coaching,’” Darwitz said.

But as time passed, she grew to look forward to her position because she loved watching kids grow and evolve as hockey players.

She helped Eagan earn its first state championship berth in four years, but she left after one season for her other alma mater.

She said it was an opportunity she couldn’t pass up.

“You could tell just by her head for the game and the way she played that she sees things that others don’t,” Frost said, “and that’s often times what makes a very good coach.”

Darwitz coached while she trained for the 2010 Olympics. She said she learned a lot about playing from coaching at the same time.

She practiced in the morning and coached in the evening, which she said was exhausting. But she met the challenge and competed in the 2010 Olympics as a captain, marking the steady evolution of her career with the national team.

Pohl said many people would say Darwitz was quieter, but when she talked, people listened.

The U.S. took home the silver medal in 2010. Darwitz said never winning a gold will always tug at her.

With the Olympics behind her, Darwitz returned to the Gophers for her second season as an assistant coach.

She knew she was transitioning from playing to coaching, but she didn’t jump immediately when Lakeville South offered her its head coaching position.

“As I thought about it more, it appealed to me more that it’d be a lot of fun,” Darwitz said. “So I took a risk and said, ‘Alright, I’ll leave a paying job with benefits to go back to school and not make much money a year.’”

She said she wanted to tackle the challenge of building the program from the ground up.

“I wanted to grow, and I think the best way for me to grow was for me to take ownership and run my own team and learn from those experiences,” she said.

Scott Darwitz, who joined Natalie as an assistant coach, described his daughter’s coaching style as intense.

Kelsey Olsen, a sophomore hockey player at Lakeville South, said Natalie Darwitz is “someone you can take advice from easily.”

Callen Naasz, a senior on the team, said nobody believed it when Lakeville South announced Darwitz as its new head coach.

“It kind of sunk in the first day of practice,” Naasz said. “At first you’re like, ‘She’s telling me what to do. This is such an honor.’ And then you realize she is a normal person.”