The defenseman is out on the ice again after transferring to Minnesota last year. 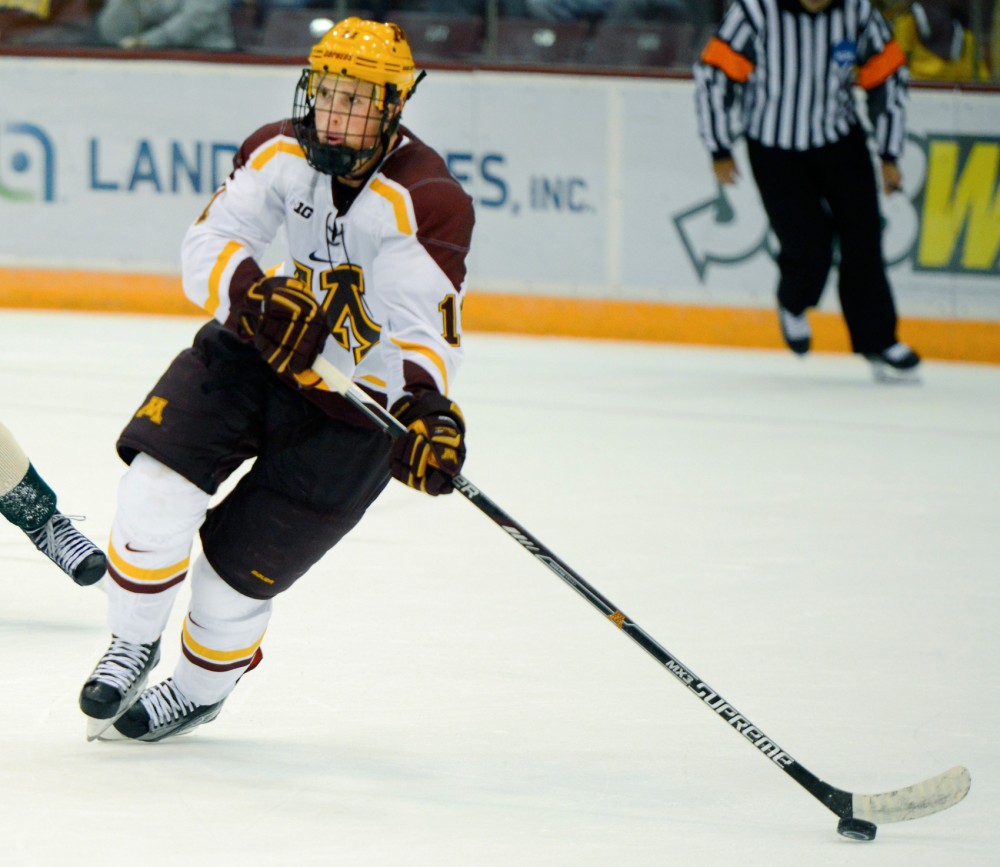 Gophers defender Nick Seeler skates during the first game of the 2015-16 season at Mariucci Arena on Oct. 10, when the Gophers fell to the University of Vermont, ending with a final score of 3-0.

Mike Hendrickson
Junior defenseman Nick Seeler prides himself on his ability to check opponents.
“I’ve always liked the physical part of the game,” Seeler said. “It’s something that a team needs. Every once in a while a big hit can get the boys going and turn the momentum of a game. If I’m able to do that, that’s great.”
Seeler started the Gophers season opener and is playing on Minnesota’s top defensive line after sitting out last season due to transferring from the University of Nebraska-Omaha.
Seeler said he’s just happy he doesn’t have to check his own teammates in practice anymore.
“It’s good to finally hit someone other than [my teammate],” Seeler said.
Head coach Don Lucia said Seeler is one of the players who has exceeded his expectations this year and brings an attitude on the ice that the team needs right now.
“I think he’s done a nice job for having sat out a year,” Lucia said. “He’s kept his composure. He’s kept his discipline. He brings that hard-nose element to our team that you need.”
Seeler already has a lot of history with Minnesota, despite transferring from another university last year.
He has two sisters, Ashley and Kelly Seeler, who both played different sports for the Gophers.
Ashley Seeler played for the school’s soccer team starting in 2005, while Kelly Seeler played for the women’s hockey team from 2008 to 2012, winning a national title her final year with the team.
Nick Seeler also skated with former Minnesota men’s hockey players in high school at Eden Prairie, including Kyle Rau and Nick Leddy.
Nick Seeler never got to play with Rau last season, and he said watching from the stands was hard at times. He said he learned a lot, though, watching the game from a
different perspective.
“Being able to sit up on the concourse and watch the games, I had never been able to do that, so you get a better feel of the game,” Nick Seeler said. “You kind of learn how much space you have, how much patience you can have.”
Now he is back on the ice, and his defensive partner sophomore Ryan Collins said he appreciates the physicality Nick Seeler brings.
“He plays very aggressive, he plays strong,” Collins said. “I like to play with a player like that to try to shut other players down and be tough to play against.”
Even though Nick Seeler can now let out his urge to be physical in games, he said he still likes to be aggressive with his own teammates during practice.
“I try not to [check players] in practice, but I like to play physical,” Nick Seeler said. “If anything I just want to help my teammates play a little tougher, play a little better. It’s going to benefit them in the future, so might as well play a little tougher on them.”
Delete Image
Align Left
Align Center
Align Right
Align Left
Align Center
Delete Heading