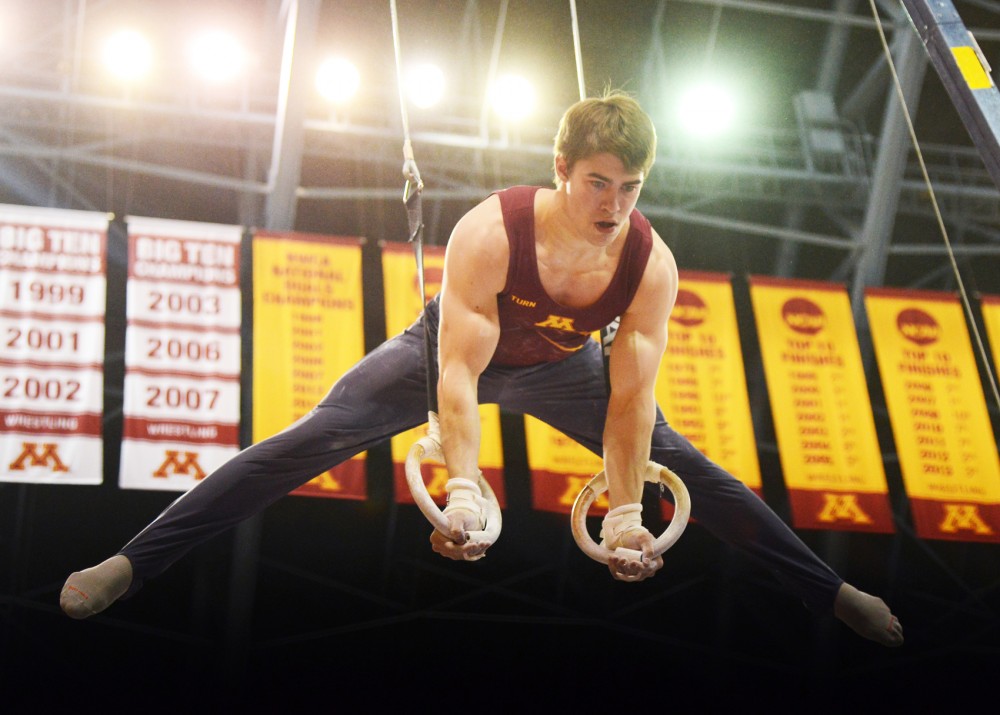 Sophomore Yaroslav Pochinka competes on the still rings at the Sports Pavillion on Saturday, Feb 13.

Thomas Jaakola
The Gophers are ranked No. 4 in the nation this season thanks to the young players on the roster.
Minnesota has only two seniors and one junior in a sport that stresses team depth and instead relies on many of its 10 sophomores, one redshirt sophomore and six freshmen to contribute.
The mostly inexperienced team posted a score of 424.500 at the Windy City Invitational, its first meet of the season, but the Gophers haven’t posted a score under 430 since.
Minnesota had its highest team score in program history on Feb. 6 against Air Force with a 438.500.
“Usually it takes us a few meets in the early part of the season to get to the hit percentage level that we’ve been at,” head coach Mike Burns said. “We got there pretty quick, and that’s been a real pleasure. We were able to put together a really good meet together [at] the second meet, and we’ve done the same thing ever since.”
The Gophers had a lot of underclassmen last year, when the team finished 0.2 short of a berth to NCAA team finals. This season, the team is on pace to go to the finals for the first time since 2007.
“I knew the team had the potential that we’re showing right now,” sophomore Jack Kramer said. “There is so much talent on this team; it’s unbelievable, especially from the freshman class. They’ve really surprised me as far as how well they’re performing this soon in the year.”
Many of Minnesota’s younger gymnasts are already among the best in their events.
Sophomore Yaroslav Pochinka is the top-ranked gymnast in the NCAA on vault with an average score of 15.383.
Fellow sophomore Alex Wittenberg is ranked eighth in the floor exercise with an average of 15.400.
Tristan Duran, also a sophomore, is No. 7 in the parallel bars with an average score of 14.983.
Freshman Justin Karstadt is ranked eighth in the all-around with an average total of 84.550, and he’s also ninth in the pommel horse with an average of 14.967.
“We said it from the start that we wanted to win Big Tens, and that’s not something that we’re just throwing out there but something we’ve firmly believed since the start,” Karstadt said.
The Gophers also have a bigger goal in mind this year, competing as a team for one more day at the NCAA Championships.
“I think these guys are bound and determined to do it,” Burns said. “It’s one of our team goals this year. When we got back from the finals from the NCAA’s last year, that was the first thing we wrote on the dry eraser board over by the pommel horse. We’re committed to that, and we’re going to do what it takes to get there.”
Delete Image
Align Left
Align Center
Align Right
Align Left
Align Center
Delete Heading