Literature and the prison system: art for change and justice 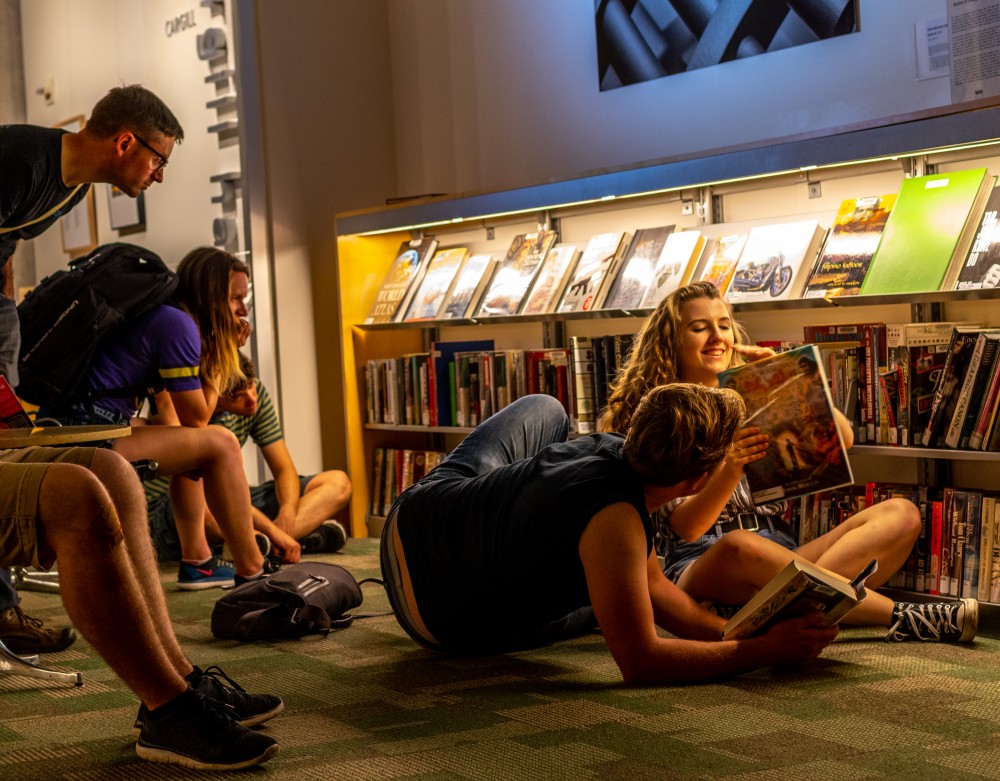 Viewers of the exhibit, "The Section of Disapproved Books," interact at the Weisman Art Museum.

It started with an edgy prison humor zine.

“The Inmate Activity Book,” created by recent University of Minnesota MFA graduate Daniel McCarthy Clifford and a partner, followed all necessary federal prison guidelines and regulations, but was ultimately labeled as “a threat to the security of the institution.”

The zine, a type of small magazine, eventually grew to become a list of more than 400 pieces of banned literature from prisons across the country.

The project that followed became “The Section of Disapproved Books,” an exhibit opening at the Weisman Art Museum on Sept. 8. The exhibit’s shelves house the banned books and attendees are invited to flip through them.

Previously displayed at the Northern Spark festival this past summer, the exhibit focuses on issues of justice reform, a subject that McCarthy Clifford has tackled in previous projects as well.

“I came out for the grad program [at the University] and started making this work about the justice system. I sort of hit my stride,” McCarthy Clifford said. “People are responding to it … which I think is now letting me know that I can actually do this. It’s kind of happening before my eyes.”

“[McCarthy Clifford] came up with this very clear idea and people reacted. People tried to understand what the hell is going on, why this book is next to that book, how they are related,” Oicherman said. “There is this … clear language that communicates a very complex idea and very clear sculptural way of going about that.”

“The Section of Disapproved Books” acts as an interactive catalyst for conversation about subjects that don’t seem relatable to viewers on the surface.

“[McCarthy Clifford] is not just looking at books that aren’t allowed in prison,” said Weisman marketing and communications director Erin Lauderman. “He’s also challenging the way those structures are in place and how he can bring awareness to those systems and bring change.”

Numerous classic and popular titles can be found in the exhibit. McCarthy Clifford believes these titles can act as a point of entry for folks to reconsider how they may relate to issues of censorship, among other things.

The project’s physical location also carries significance to its agenda.

“I’m working to disrupt these systems … and I think the most effective way to do that is from [the inside],” McCarthy Clifford said. “Being a grad student, being able to show this work in the Weisman is kind of perfect because we’re not in a gallery somewhere in Northeast that’s removed from the institutions. We’re in the institutions. And I think that’s super important.”

The project encourages open dialogue about injustices within the federal prison system, McCarthy Clifford said. Eventually, he said he hopes it may lead to action in some capacity.

“The goal would be to affect these regulations,” McCarthy Clifford said. “[Banning these books] is a pretty arbitrary process, and I think bringing awareness to it could affect some policy change.”

The collaborative nature of “The Section of Disapproved Books” creates a memorable experience that the audience can take with them. They can bring their own perspective, which may not otherwise be there.

“[There aren’t going to be] measurable outcomes in three months, or even a year,” Oicherman said. “It will be all of these thousands of people that come [away] from [McCarthy Clifford’s] work, affected by it in some way. And we still don’t know which way [that will be].”

What: “The Section of Disapproved Books”