College Kitchen goes behind the scenes of the hit new ramen restaurant in the area. 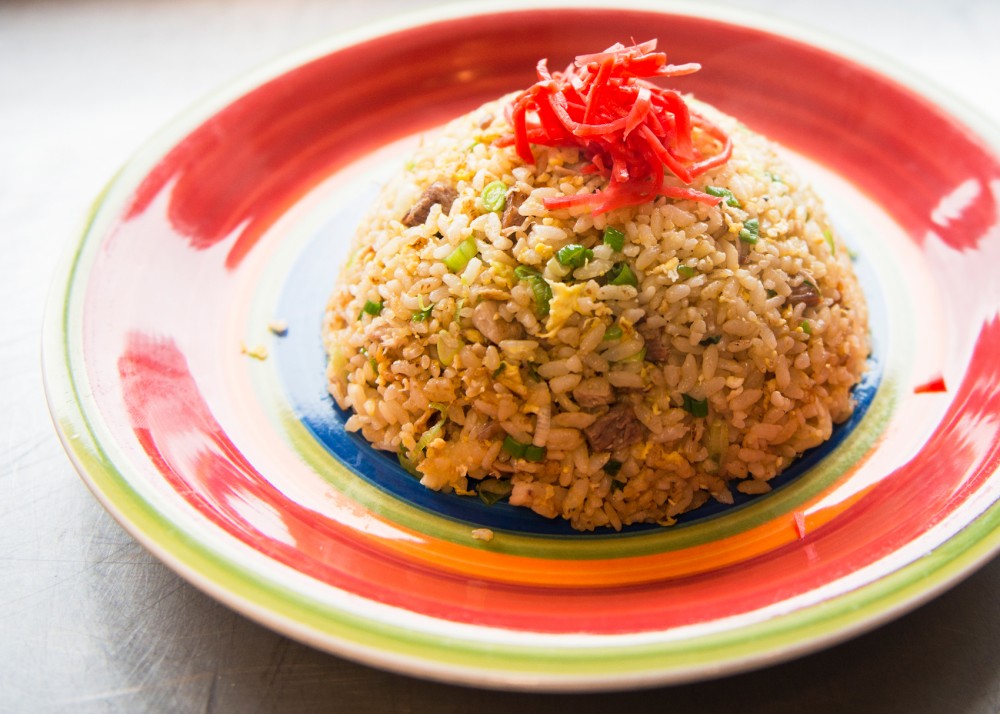 Chahan, a japanese fried rice dish, sits waiting to be eaten at Ramen Kazama in Minneapolis on Friday, March 18.

Yena Lee
At last, there is a specialty ramen house in Minneapolis. Although Ramen Kazama opened its doors in late 2015, the buzz (and the lines) won’t stop.
Even though there are notable restaurants with ramen on their menus around town, Ramen Kazama is the first real-deal ramen shop in the Twin Cities.
Hawaiian-born, Japan-raised owner Matthew Kazama says ramen is his comfort food — it’s the stuff he grew up with.
A&E chats with chef Kazama and general manager and co-founder Josh Floring.
How did Ramen Kazama start in the Twin Cities?
Matthew Kazama: I was doing ramen at Fuji Ya; it was going really well. Then I thought I could do my own business. I was looking for space and all that, [and] I [knew] Josh from a long time ago, and I [knew] that he was a commercial realtor, [so] I asked him [for] his opinion.
When we were looking for spaces, he was interested in this concept. Then we became partners.
Josh Floring: We met at Kabuki out in Eden Prairie, one of oldest Japanese restaurants in Minnesota, [although] it closed down a couple years ago. We’ve known each other for over a decade.
He was getting super passionate about ramen, and he needed to get a direction going, so we created the concept [and] did all the homework to find the spot.
What is your ramen background like?
MK: I learned on my own. I had a chance to make ramen at Nick and Eddie about five [to] six years ago. Right after that opportunity, I had the chance to make ramen on Wednesdays at Fuji Ya. That’s it. I learned on my own and researched on my own.
Is the menu going to change at all?
JF: The concept was to keep the menu very simple and do a few things well with the opportunity to add specials going forward. In the summer, we’ll add a summer ramen.
Broth is a main component to any good ramen, how does Ramen Kazama do broth?
MK: It usually [takes] seven to eight hours or more.
I sometimes add stuff or take out stuff. We’re still trying to figure it out but always researching and learning [during the] process.
What sets Ramen Kazama apart from the other ramen places around town?
MK: We try to make the best ramen. I don’t know if it’s going to be any different than any other places because they’re trying to do their best, too.
But we try to [cook] from scratch as much as possible and [be as] authentic as possible.
I’m trying to make it as similar to what I’ve been eating, trying to make something that I grew up on.
Did you expect the restaurant to be the hit it is today?
JF: We were going off of what [Kazama’s] clientele was like at Fuji Ya. We knew that there was an appetite for ramen.
We knew there wasn’t anybody in town doing a specialty ramen restaurant, so that was, “Hey, we should look into this.”
Recipe: Pork belly fried rice
This dish is on the current menu at Ramen Kazama.
3-4 tablespoons oil (make sure it’s high smoke point oil like grapeseed oil)
2 eggs, cracked and mixed
Handful of pork belly
Handful of green onions (chopped)
2 cups cooked rice
Pinch of shredded pickled ginger (for garnish)
Salt and soy sauce to taste
1. Heat up the oil in a pan. A wok is preferable, but a regular saute pan will work, too.
2. Wait until the oil starts to smoke, then pour in the eggs.
3. Using a wooden spoon or a spatula, mix the egg around in the pan. Because the pan and the oil is very hot, the egg will cook very fast.
4. Once the egg is cooked, add the rice.
5. Toss the egg and rice together in the pan. Chef Kazama says to try to cook each grain of rice.
6. Add in the pork belly to the rice and egg.
7. Add in some soy sauce and salt to season.
8. Once the dish is seasoned to your liking, add in the green onions. Make sure it is mixed in well.
9. Taste for seasoning again.
10. Plate the fried rice, and garnish with shredded pickled ginger.
Delete Image
Align Left
Align Center
Align Right
Align Left
Align Center
Delete Heading