U students to bring film noir to Fringe Festival 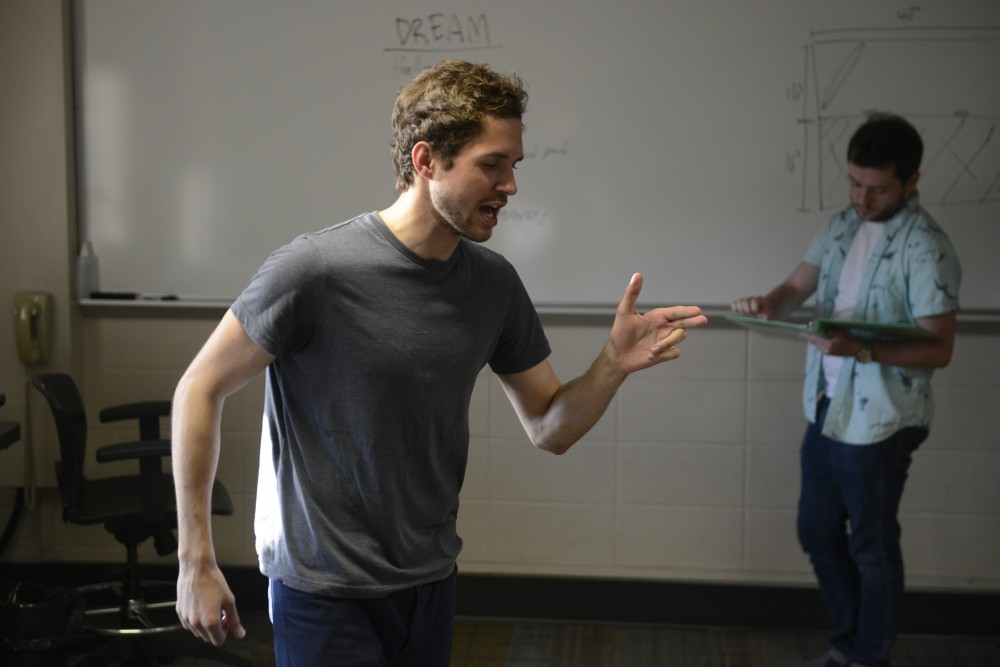 Andrew Friedman delivers a monologue during a rehearsal in Blegen Hall on Tuesday, July 11, for the upcoming Fringe Festival production Hot Air.

Some say the best ideas begin as sketches on napkins. That’s exactly how “Hot Air,” a film noir-inspired play created by University of Minnesota students, got its start.

Art junior Fletcher Wolfe had written “Hot Air” as a short story when English and theater junior Nick Saxton, came to him wanting to write a play. The two juniors started their research and never looked back.

The play will debut at the Nolte Xperimental Theatre on West Bank during the Minnesota Fringe Festival on Aug. 3 and will run on Aug. 6, 8, 11 and 13.

Starting in January, the pair — armed with plenty of coffee — would watch a few film noirs every Friday. They’d take notes, gathering what they liked and disliked about the style.

“I feel like you have to learn the system before you can break it,” Saxton said. “We can’t make fun of film noir unless we know every single detail and intimacy involved in it.”

This genre of “dark film” usually features crime dramas that are dark in subject matter, lighting and social morality.

“Once we got the skeleton of what a film noir is, we could just have fun with that,” Saxton said.

And fun they had.

The resulting murder mystery has gunshots made from balloons, flashlights with google-y eyes and even a re-enactment of Pearl Harbor with shadow puppets.

“I think you can respect something and also think it’s really dumb,” Saxton said. “It’s a tricky line, but it’s one worth exploring.”

The production is not trying to make fun of or parody film noir; Wolfe and Saxton are taking their appreciation for the style and having fun with it.

While Wolfe was responsible for the lines themselves, he and Saxton collaborated to develop the plot and characters. In the end, Wolfe said writing the play, while initially intimidating and unexpected, combined his two loves: art and writing.

After seven months of hard work — and slightly lower grades — the two had put together a play that brought their voices and vision to the stage.

While they may be college students, they made it a point to not create “college theater”; they just created “theater.”

Now, looking forward to next month’s festival, they both said the countless hours of research and work have paid off.

“We’re two dudes who are very passionate about what we’re doing,” Wolfe said. “It’s going to be the best that we have the physical capability of doing.”

“I think we’ve really just tried to construct a play that’s just a series of things that are all connected,” Saxton said. “It’s going to be a unique, dumb experience.”