Hear this: World Listening Day at the Walker

Celebrate World Listening Day on Thursday by opening your ears to the environment, one talking plant or sound scavenger hunt at a time. 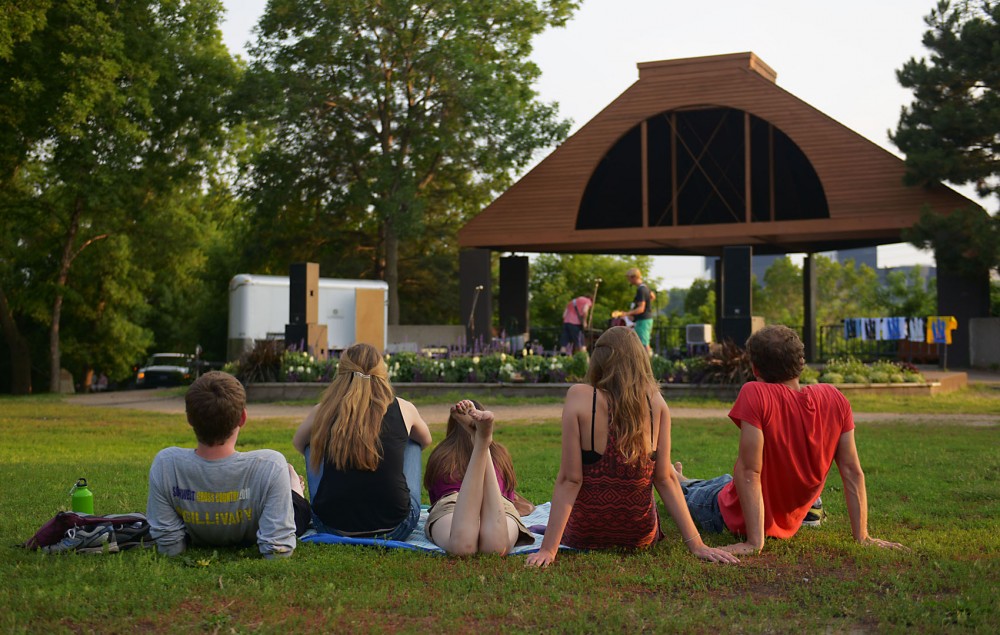 Minneapolis residents gather round the pavilion near the Stone Arch Bridge to listen to local band Silent Agency on July 15th, 2013.

Sometimes the vegetables give off a reedy low-pitched tone. Other times, Philip Blackburn’s talking plants emit a set of seemingly random percussive beats.

“Some of them have more emotive qualities than others,” Blackburn said. “If you can imagine a crying plant.”

“Suddenly it becomes a heuristic problem of using all your human ingenuity to get a rise out of this plant,” Blackburn said.

At the heart (or cochlea) of Blackburn’s installations is an appreciation for deep listening, a philosophy first outlined by composer Pauline Oliveros.   World Listening Day celebrates a sonic meditation, appreciating everything from birdsong to the hum of an air conditioner.

“It’s a practice rather than, ‘Here’s another piece, here’s another song — download it, buy it,’”**** Blackburn said.

Deep listening promotes newfound awareness to the acoustic ecology, the complex layers of sounds in the environment. While Blackburn’s talking plant experiment yields no scientific data, the artist hopes to inspire thoughtful investigation.

“You may wonder what it is and you may research that or you may be a little more appreciative the next time you have a salad,” Blackburn said.

Listening here lies in appreciating the guts beneath the greenery. Under the fleshy stems, a network of xylem and phloem shuttle water and food across the plant. Blackburn’s art encourages occasions to interact with the plant’s hidden life.

“It’s so interactive that you don’t know if it’s the plant performing or the user,” he said.

A high-tech medical device and a MacBook Pro power Blackburn’s installation, but World Listening Day pushes listeners to tune in to the environment anywhere.

Vocalist Viv Corringham sees the international holiday as simply a chance to walk. The British vocalist wants listeners to silently enjoy sounds they’d normally ignore. One of her prompts for the Soniferous Garden tour at the Walker’s Sculpture Garden captures this spirit of creativity.

“Imagine this is a garden full of sounds, rather than sculpture. What would you like to hear in it?” she said.

Corringham also stresses that World Listening Day is not about identifying sounds as harmonious or discordant. Instead, the practice of her “soundwalks” opens up the world of unappreciated sounds in the same vein as John Cage’s “4’33,”” the avant-garde composition performed without any deliberate noise.

“Listening is a way of opening up to the world and being in the present moment,” she said.

Recognizing the landscape of noise around the Walker also forces listeners to contemplate how human intervention has altered the environment, Blackburn noted.

“Our soundscape is always changing about us,” he said. “The sounds of old industries or the sounds of certain birds — our ecology is changing all the time.”

Blackburn and Corringham’s work forces passersby to pay attention to their surroundings. This simple tenant of World Listening Day might seem obvious, but at least it’s a chance to escape the endless cycle of images on the Internet or TV.

“Television is so powerful and visuals are so powerful in our culture that we often have our aural imagination stifled,” Blackburn said.

Nearing the end of one of the talking plants’ “performance” at a children’s festival in St. Paul, a woman summed up the piece’s potential to breed imagination, however lame her joke.

“Now vegetarians may not even eat vegetables,” she laughed.