The Gophers play Wisconsin, North Dakota and Duluth before the playoffs. 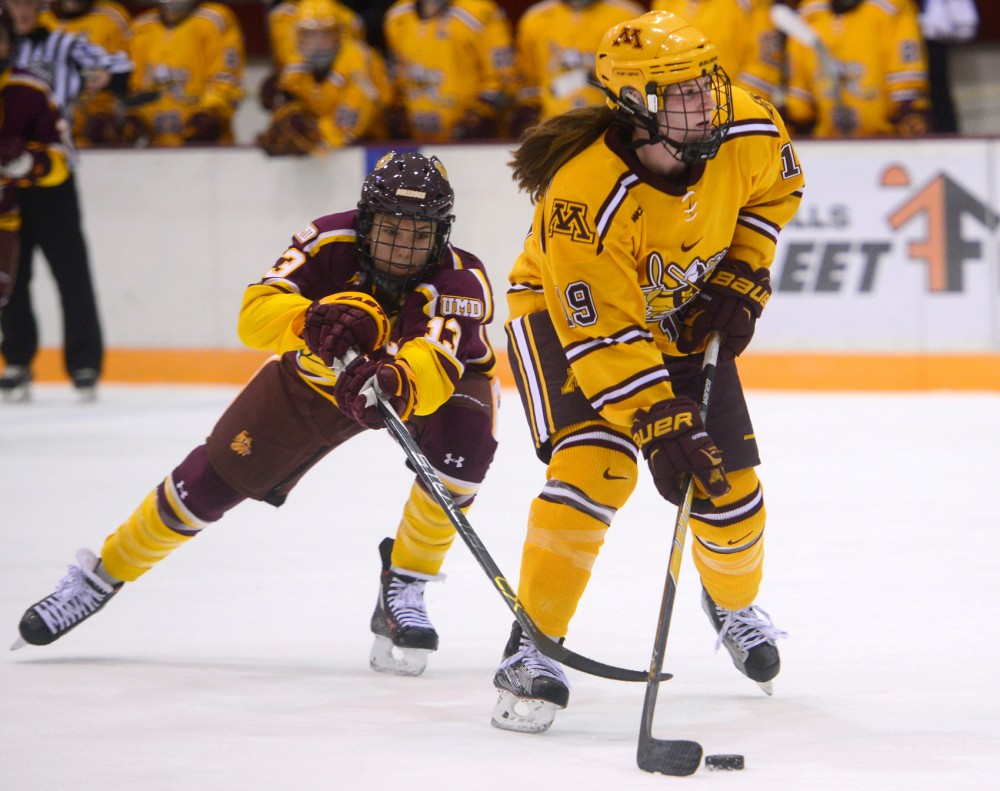 Gophers forward Kelly Pannek drives the puck, seconds before her second-period goal against the University of Minnesota- Duluth at Ridder Arena on Oct. 24.

Emily Polglaze
The Gophers have played a tough schedule, but the team’s toughest stretch may come in the final games of the regular season.
No. 3 Minnesota has six games left before the WCHA playoffs, two against in-state rival Duluth, two with No. 8 North Dakota and two facing No. 2 Wisconsin.
“We’re playing two of the top teams in the country, and Duluth is just on the outside looking in,” head coach Brad Frost said. “You want to have those tough games down the stretch because you learn how to win. It does nothing but build character for your team.”
The Gophers start with North Dakota this weekend at home, one of only two teams to hand Minnesota a loss this year. The two teams split in Grand Forks earlier this year, with the Gophers winning 5-1 in the series opener, but losing the next game 4-3.
The rivalry between the two teams has hit a new high in recent years, Frost said, after twin standouts Jocelyne and Monique Lamoureux transferred to North Dakota after their freshmen years with the Gophers in 2009.
The sisters were Minnesota’s two leading scorers in the 2008-09 season, and Monique Lamoureux was a Second Team All-American and a Patty Kazmaier Award finalist her freshman year.
Fans also give the rivalry more energy since the Gophers men’s hockey no longer plays North Dakota on a regular basis due to conference realignment in 2013, Frost said.
“It’s fun playing them. They always give us their best game, and we give them ours,” senior captain Hannah Brandt said. “There should be some good games this weekend, and we’re looking forward to it.”
The Gophers play Duluth the following weekend, and they haven’t lost to the Bulldogs since 2012. Minnesota swept the teams’ earlier series this year at Ridder Arena in October, with 5-2 and 6-1 victories.
The team will then close out its regular season against border rival Wisconsin at home. No. 2 Wisconsin currently sits atop the WCHA holding a 20-1-1 conference record, with two victories coming from a home sweep against Minnesota in December.
Both games of the series were close, with Minnesota losing 3-2 in overtime the first game and 3-1 after a late empty-net goal the second.
Wisconsin currently has the top penalty kill and defense in the country, and goaltender Ann-Renee Desbiens boasts a .966 save percentage and has 14 shutouts in 26 games.
The Badgers cap off a difficult ending slate for the Gophers in the regular season, but the late challenges could help the team prepare for another potentially long playoff run.
“I think it’s definitely been a ramp-up,” junior captain Lee Stecklein said. “[The rivalry games are] the right thing we need.”
Delete Image
Align Left
Align Center
Align Right
Align Left
Align Center
Delete Heading