Lawmakers are considering $1.4M in funding for research to increase crop yields. 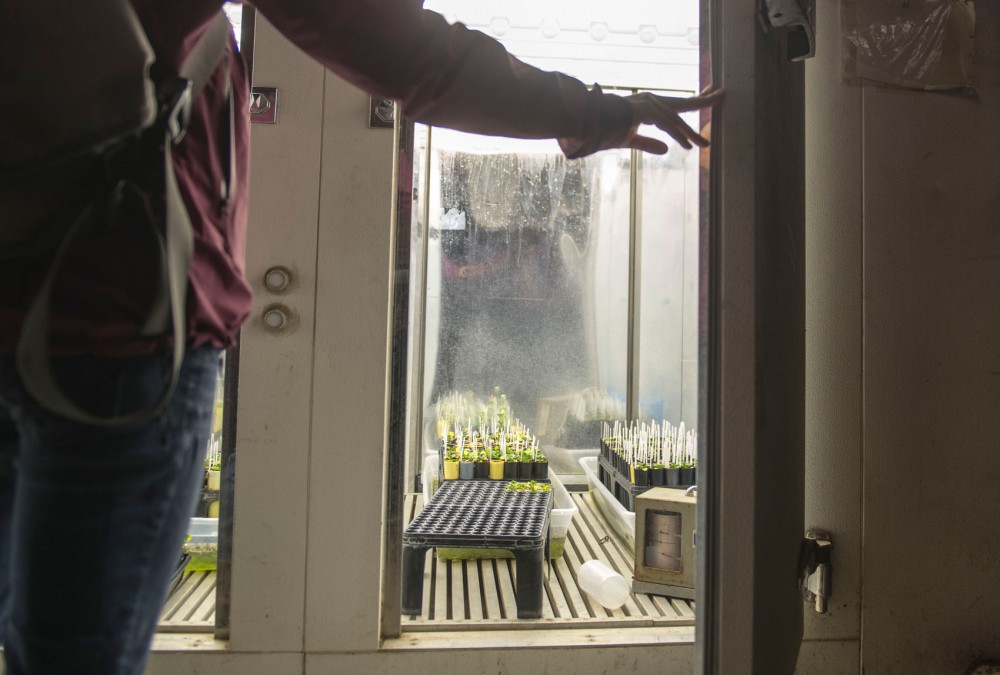 Kayla Altendorf, graduate student in the department of agronomy and plant genetics, opens the door to her experimental growth chamber on St. Paul campus on Saturday. The plants within the chamber are crosses predicted to optimize favorable crop traits such as winter hardiness. Projects such as Kayla's would benefit from funding through the Forever Green initiative.

Nestled under the snow, Kayla Altendorf’s pennycress plants were green and nearly ready for harvest when she tended to them Saturday afternoon.

University of Minnesota researchers like Altendorf, a graduate student in the Department of Agronomy and Plant Genetics, want to prove how plants like pennycress could thrive in the offseason, benefitting farmers and the state’s economy.

Legislators are on board with the proposal, saying it will benefit the state’s agricultural economy, and University researchers are hopeful that the measure will pass. A Senate finance committee discussed the proposal  Friday and could make a decision in the coming weeks.

Because soybeans and corn crops dominate farmland in Minnesota, fields are barren during the winter. This sometimes leads to soil erosion and water pollution, said Don Wyse, University professor and co-director of the Center for Integrated Natural Resources and Agricultural Management. Farmers can alleviate those issues, while making additional revenue, by planting and harvesting more perennial crops on the same land outside the traditional growing season, he said.

The initiative is cost-effective and puts more money in the pockets of Minnesota farmers, Wyse said.

With the funding boost, the University would have resources to help farmers change existing vegetation rotations without displacing cash crops like corn and soybeans. Planting additional winter and perennial crops would mean more state farmland would have vegetation throughout the year.

The College of Food, Agricultural and Natural Resource Sciences, the College of Biological Sciences, University Extension and Minnesota Agricultural Experiment Station are behind the plan, which Wyse said has been in the works for at least a decade.

“I think if we’re going to address the environmental challenges associated with our farming today, this is the general approach we have to take,” said Rep. Clark Johnson, DFL-North Mankato, noting the large agricultural community in his home district.

If the Legislature approves additional funding for the initiative, Wyse said, it would pay to hire more University staff members — like scientists and postdoctoral, graduate and undergraduate students — as well as help cover research expenses.

Wyse said the initiative would allow Minnesota companies a new supply of crops they currently have to import from
overseas.

“We’ve got companies right in our own backyard that are clamoring for these [crops],” said Sen. Kevin Dahle, DFL-Northfield.

He said General Mills and cosmetic companies like EstÃ©e Lauder and Aveda have taken interest in the research.

Altendorf said the state money would help expand her program and give her experience she can’t get elsewhere.

“It makes a big difference for people like me, and farmers, too,” she said.

Altendorf said pennycross, along with other crops, is being bred on the St. Paul campus to produce better seeds and withstand inclement weather. After attaining the most desired strain of the crop, Altendorf said farmers would have something to grow during the “brown months.”

“This is just the very beginning,” she said.