The Minnesota Daily • May 6, 2013 • https://mndaily.com/217675/sports/softball/clutch-bats-moulton-help-team-secure-top-four-seed/

The Gophers swept Indiana, the last-place team in the Big Ten. 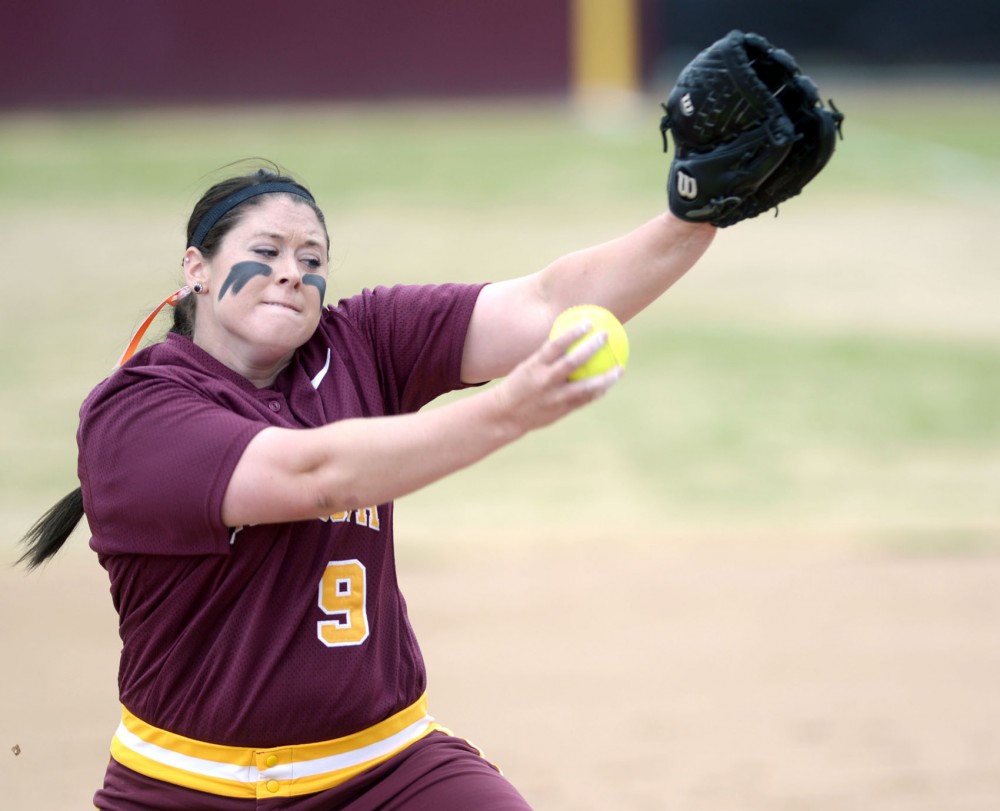 Minnesota pitcher Sara Moulton winds up to throw a pitch against Indiana on Saturday, May 4, 2013, at Jane Sage Cowles Stadium.

Needing wins to secure a top seed in the Big Ten tournament, the Gophers took care of business this weekend against lowly Indiana.

Minnesota swept the Hoosiers with an 8-0 and a 1-0 win in a doubleheader Saturday and 5-4 win Sunday afternoon.

The wins secured a top-four seed in the single-elimination Big Ten tournament, which means the Gophers will receive a first-round bye.

Indiana erased a one-run deficit in the top of the seventh inning of Sunday’s game and took a 4-3 lead. Minnesota came back in the bottom of the seventh and won it thanks to some shaky Hoosiers defense. Senior catcher Kari Dorle scored the winning run in her final home game for the Gophers.

“We all knew that we were going to win,” sophomore third baseman Kaitlyn Richardson said. “They made one or two errors that last inning, but we didn’t care. We scored, and we won and we made it happen.”

Richardson hit a two-run home run in the bottom of the fifth inning to break a 1-1 tie. Richardson’s shot, which hugged the left-field foul pole, was her 10th of the season.

Junior ace Sara Moulton pitched around a leadoff triple in the top of the fourth inning to keep the game scoreless Sunday.

The Gophers scored the first run of the game in the bottom of the fourth when senior Alex Davis hit an infield single with two outs that plated sophomore Erica Meyer. Freshman Paige Palkovich followed with a line drive to the left-center field gap, but Davis was thrown out at the plate trying to score.

After busting out the bats in the first game of Saturday’s doubleheader, the Gophers needed just one clutch hit from sophomore shortstop Tyler Walker in the second game.

Walker launched a solo home run to right-center field in a scoreless bottom of the eighth inning for the walk-off win.

The Gophers didn’t need late-inning heroics in Saturday’s first game. Minnesota had six extra-base hits and scored eight runs, which was more than enough for Moulton, who threw a two-hit shutout.

Moulton picked up the win in all three games for Minnesota.

“She pitched every inning of every game,” Richardson said. “She really just put her heart out there.”