Gophers defense will spend the rest of the season facing a gauntlet of talented running backs in the Big Ten. 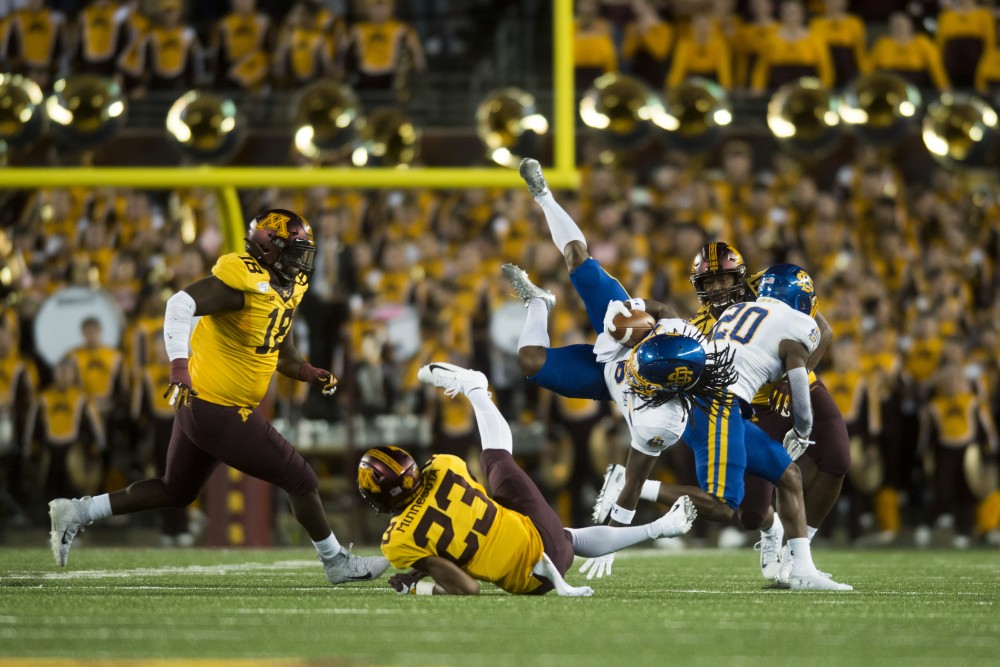 It’s not going to be an easy road for the Gophers as they resume play after a much-needed bye week. The final nine games of the season come against Big Ten opponents, and with Big Ten West title aspirations, their defense will have to key in on stopping the run game.

The Gophers have the 43rd ranked run defense in the country, only allowing opposing teams to average 118 yards per game on the ground and 3.77 yards per carry. However, if you take out quarterback sacks and rushing attempts, the stats depict a different story.

However, the run defense started showing significant improvement in the second half of the Georgia Southern game. In the last half of the game, the Gophers held the Eagles to only five yards rushing.

“Those guys were playing at really high level in terms of their technique, their hands and their tackling and that carries over into other teams,” said Rossi about the second half play against Georgia Southern.

After senior linebacker Thomas Barber, the next three leading tacklers for the Gophers are all defensive backs. The linebacker corps has been hampered by senior Kamal Martin’s suspension and injury. In his only game, Martin amassed 13 tackles.

“On the defensive line, we have to improve the [tackles for loss] and sacks, in terms of being more disruptive and getting off blocks,” said redshirt senior defensive lineman Sam Renner. “We can’t just be in your gap. You have to play through the block, get off the block and end up making the play.”

Despite the struggles stopping the run, the Gophers still stand at 3-0. However, Big Ten play will present a new challenge. While the Boilermakers have struggled to run the ball — Purdue’s top rushers Zander Horvath and King Doerue are averaging less than three yards per carry — it only gets tougher for the Gophers defense after the game in West Lafayette. The Big Ten is full of some of the best rushers in the country.

In the next nine weeks, the Gophers face Illinois running back Reggie Corbin, who is averaging 7.1 yards per carry and is the fourth-leading rusher in the Big Ten.

Iowa and Northwestern boast tough running offenses, and perhaps the Gophers’ toughest test will come in the final game of the regular season against Wisconsin and Heisman hopeful Jonathan Taylor, who is averaging 7.6 yards per carry and has scored seven touchdowns this season.

“The Big Ten is definitely a different beast,” said Renner. “Once you get into Big Ten play, anybody can beat anybody. Nobody is going to hand you anything in the Big Ten.”