Art — on the rocks, please

With a whole lot of wool sweaters, the Art Shanty project takes over a tiny corner of a frozen suburban lake. 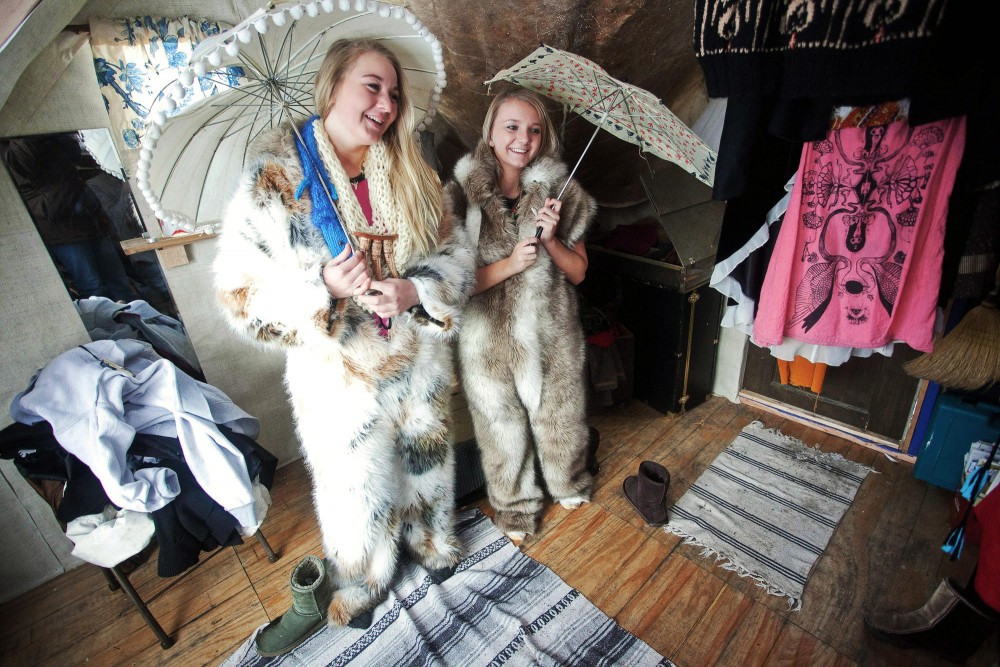 Elisabeth Stengaardsbakken and friend Kimmie Thelen pose for a photo inside Sashy Shanty Saturday morning on Medicin Lake. The art shanties are part of a four week exhibition inspired by the ice fishing house that are a tradition on frozen lakes.

What: The Art Shanty Project

Where: Medicine Lake in Plymouth, Minn.

A one-room schoolhouse, a basketball court and a working letterpress sit atop the frozen lake.

Over the next few weekends, the surprisingly cozy community of slipshod shacks that have sprung up on Medicine Lake in Plymouth will play host to marriage ceremonies, dance parties, fashion shows and sling shot lessons.

âÄúI had an idea to do a fashion photo booth for an Art Shanty,âÄù said Danielle Everine, a Minneapolis fashion designer and Project Runway alum.

From the outside, the resulting Sashay Shantay Shanty looks like the attic of a grandmotherâÄôs house. And the inside is outfitted with the homespun eccentricities of a rugged grandmaâÄôs house âÄî a real wildebeest hide hangs in a corner, and treasure chests are packed with homemade winter wear. Wood stoves burn in almost all of the shanties, but the feature feels especially appropriate in this one.

âÄúA lot of people donâÄôt know about the local fashion scene,âÄù Everine said. So along with the artists who have helped her create the shanty, sheâÄôs stocking it with locally designed garments and allowing people to play around with their own looks.

The other 19 shanties are interactive too. At the Nordic Village Bridge, kids and adults alike take on Danish names, throw on goat headdresses and play out the story of the âÄúThree Billy Goats Gruff.âÄù

The Letterpress Shanty will document the whole shebang with a broadside newspaper composed of tweets hashtagged #shantyQ.

âÄúThe audience is really participating in what theyâÄôre doing. ItâÄôs not something that you come in and look at passively,âÄù said co-founder and director Peter Haakon Thompson.

As they walk from shanty to shanty, rubbing their hands together and hiking up their long johns, visitors pick and choose which shanties strike their fancy âÄî there are no defined paths or time limits. That is, until the bell of the One Room Schoolhouse rings and itâÄôs class time.

The shantiesâÄô themes range from the educational (the folks at the ICE-Cycles shanty will teach you how to ride your bike in the winter) to the purely silly (in the family-friendly Naughty Shanty, visitors can steal cookies from the cookie jar and deface the Mona Lisa).

The idea is that people will have so much fun that they never realize theyâÄôre interacting with art.

And people didnâÄôt have to be trained visual artists in order to build a shanty.

For Thompson, ideas outweigh credentials âÄî he didnâÄôt ask for rÃ©sumÃ©s or exhibition histories during the application process.

Anyone can be a shanty-builder. This year, a group of adjunct professors in the University of MinnesotaâÄôs architecture program created a shanty in which you lay in a hammock and observe the sun through prisms.

âÄúThere was a knitting shanty that my mom and her friends had for a couple of years,âÄù he said.

Thompson wants his patrons to re-evaluate where art belongs. HeâÄôs been fighting the good fight since 2004, when the project was born out of admiration for ice fishing shanties and fascination with unregulated public spaces.

After going on hiatus in 2011, the Art Shanty project is now a biennial affair.

âÄúThe project has grown much faster than our capacity as an organization has,âÄù Thompson said.

In the off years, he wants artists to break out their shanties in more unexpected places, like parking lots and backyards.

The shanties will have the same effect whether theyâÄôre set up all together in Plymouth or dispersed throughout the stateâÄôs lakes and neighborhoods. The unpolished structures are a reminder that art can be experienced anywhere by anyone.