Michele Redman took over the team after Katie Brenny resigned in 2011. 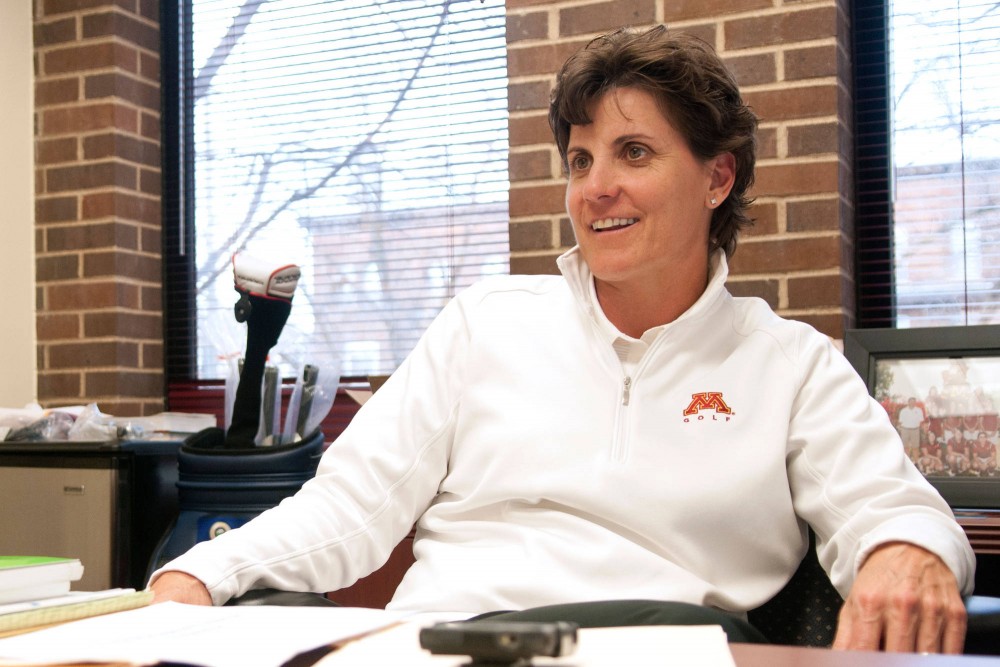 In the summer of 2011, the Gophers women’s golf team needed some stability amid a situation that seemed to worsen with each passing headline.

“I remember knowing what they went through and reading about it; I was trying to help them,” Redman said. “We did a really good job of moving past it as quickly as possible.”

Now, in Redman’s third year with the team, the Gophers are back in the NCAA regionals after a season that included 17 individual top-20 finishes.

“I think the fact that we’re continually improving the scoring averages each year is something they haven’t seen here,” Redman said. “There hasn’t been any consistency with the coaching here, so I think that’s the difference.”

Redman was hired seven months after Brenny filed her lawsuit against Harris and the University’s Board of Regents.

Redman, a first-time head coach, said she felt no hesitation in applying for the job amid the controversy surrounding the team.

“I actually tried to get the position the year before,” she said. “I knew I was ready to be done playing on the tour fulltime. … And coaching was always something I wanted to do.”

Still, Redman’s career with the Gophers started with a baptism by fire.

“They hadn’t had any [consistency] before we got there, so when we got there, there hadn’t been as much recruiting as I would’ve liked,” Redman said. “We [had] to play catch-up a little bit.”

In addition to recruiting, Redman was tasked with piecing together what seemed to be a mismanaged program.

For the players, the first year of the new coach’s tenure brought plenty of confusion, especially for the freshmen.

“I’m pretty innocent and naÃ¯ve when it comes to that stuff,” junior Anna Laorr said. “It wasn’t until I started talking to … my future teammates when I got to school, and they told me how terrible [the situation] was.”

Redman said she recognized the fear players had in regards to the new coaching staff and said she tried to eliminate their apprehension as quickly as possible.

“It took us a while, but we developed a lot of trust with them, and I think that was the key,” she said. “They know we’re here for their best interests.”

Theinthong said her experience has improved since her freshman year — something she attributed to Redman’s presence.

“I’m getting more connection with the coaches,” Theinthong said.

Those connections across the team have allowed Redman to return the women’s golf program to prominence in her third year at the helm. She’s built a sense of trust across the roster, and now the team seems to be reaping the benefits.

“It’s a process,” Laorr said. “We knew we couldn’t expect results immediately, and now this year, I would say … this spring especially, we really stepped it up.”

The resolution to the Brenny trial came more than a month ago. Redman admitted she had forgotten the trial was still going on at all, and she thinks the players did, too.

“I don’t think it was really weighing on them either,” she said. “I think they pretty much dealt with it … and they were ready to move on.”