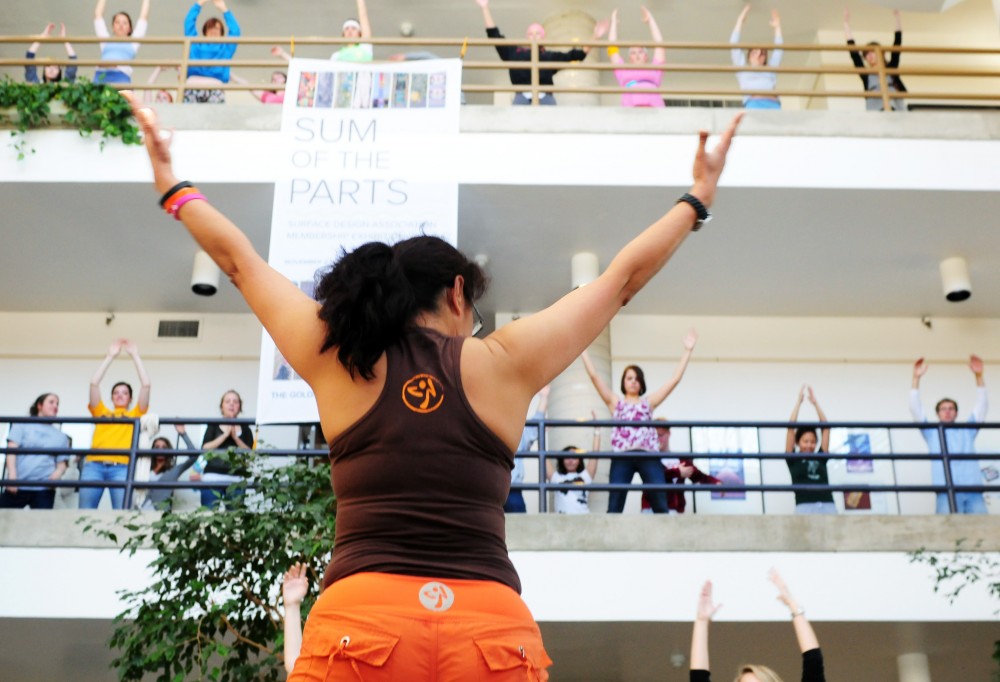 Naseema Shidi leads a creative problem solving class in Zumba dancing Wednesday in the McNeal Hall atrium. Zumba dancing is an exercise program based on the integration of Latin music and dance with traditional aerobics.

Loud Latin music and 80 Zumba -dancing students filled McNeal HallâÄôs atrium Wednesday afternoon. Professor Brad Hokanson was preparing his Creative Problem Solving class for their final projects. To get his class thinking differently about how they can complete their goal of filling the four-story open atrium, he invited Naseema Shidi to lead his class in Zumba dancing. The class is based around activities which stretch studentsâÄô personal limits, Hokanson said. It helps students learn to be creative and productive in a group setting. Zumba dancing is an exercise program based on the integration of Latin music and dance with traditional aerobics developed in Colombia in the mid 1990s. ItâÄôs been gaining popularity in the United States since its introduction in 1999. Shidi, an information technology project manager for Medica , teaches Zumba and other group exercise classes at community centers around the area in her spare time. Hokanson started teaching the creative problem solving class at the University of Minnesota in 2000 as an honors seminar with 17 students, and has taught a similar class every year since. This year, the class became required coursework for students majoring in retail merchandising and expanded to a large lecture with separate discussion sections. David Nevolo, a retail merchandising first year , said he questioned the purpose of the class at first because the problems presented werenâÄôt practical or related to his major. After getting farther into the class, Nevolo said he thinks itâÄôs good that the class is required. âÄúIt gives you specific methods for coming up with creative solutions,âÄù he said. âÄúIt gives confidence and comfort doing the out of the ordinary.âÄù âÄúWhat I have to tell them isnâÄôt that important,âÄù Hokanson said, âÄúWhat we can get them to do will change their lives.âÄù Hokanson said studentsâÄô creativity increases by about 30 percent from the beginning of the course to the end. He measures creativity using a test developed at the University in the 1960s by Paul Torrance . The test gives students five minutes to come up with questions about an image. ItâÄôs scored based on how many questions there are, how different those questions are from each other, and the frequency of unexpected questions, Hokanson said. Doing something different is the classâÄôs recurring assignment. Each week, Hokanson assigns the class a specific way they must do something they havenâÄôt done before. One week, students had to eat something different. One student, for example, ate tempura-fried lutefisk wrapped in chocolate-covered bacon on a stick, he said. Students arenâÄôt allowed to do anything for class that demeans people or comes with jail time, but everything else is fair game, Hokanson said. Students vote each week to determine which idea was the most creative. WednesdayâÄôs winner convinced a stranger in Las Vegas to go wind-tunnel sky-diving with her over the weekend. Next year, Hokanson plans to have a book ready for an expanded class with a capacity of 180 students and to make a yearbook-like compilation of the photos available to students at the end of the course.